would you watch a Batman film set almost entirely in space?

I was thinking about supe films and genre relative to the comics. I realized that there are Batman comics which take him to space, yet i have never even considered it a possibility that a film would take him to space. AFAIK Bats has never been to space in any live action interpretation. Would you think it was ridiculous to see batman in space on the big screen? Would you be okay with this in the future or underany circumstances? 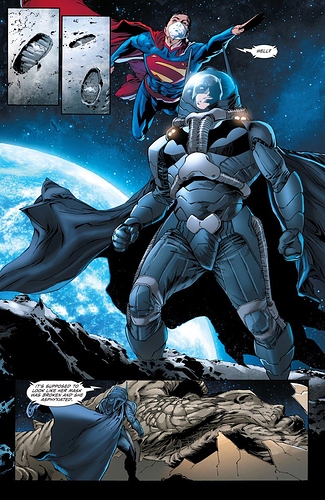 Sounds good by me.

If it’s a Justice League movie, sure. But a solo Batman movie, not really.

It depends on the plot.

I mean, I’d watch it. It sort of necessitates not including most of the supporting cast and stylistic elements that can make or break a Batman story, but adaptations need to use more original plots, and Batman in space could still be interesting if the story were decent.

Heck yes. And I liked Batman Ninja. Bring the Robins along too! Plot, no plot I’m game.

To quote Bale’s Bruce Wayne “Batman has no limits.” and that includes space based adventures.

Would I want to see it? No. Would I still go see it? Probably definitely.

I prefer a grounded take on the character. But I can’t see myself not going to see a Batman movie. Fortunately I trust Reeves to not send the Batman to space.

I could watch batman eat nachos

That was the joke

Yup, I mean I watched Leprechaun in space and Jason in space and they were the best in both series. So of course Batman in space would be rad. @Legend killer do you think bats eats his nachos with a fork?

Let’s just be honest. The question is really, “Would you watch a Batman movie?” and the answer is yes.

cuts into a Snickers with a knife and fork

@RDB He does it with a hammer… of justice

I’ve seen him in the sewers a plenty. Pretty sure I’d watch the worlds greatest detective anywhere he wants to go.

Leprechaun in space reference is a small dose, of why your posts, are the most.- Etrigan The Demon.

Djd you disappeared from DCs light, but you were immersed in the written word and came back to spread it’s might!