• For this week’s discussion give your review of the books. Discuss what you enjoyed, what worked, what didn’t. Give it a rating if you’d like.
• If you were writing the DISCUSSION QUESTIONS, what is something you’d ask for this week’s selection? 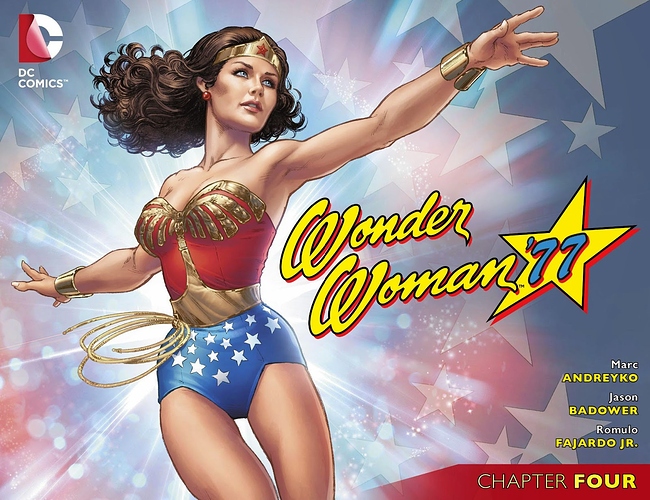 I’m a third into WW ‘77 and there are definitely some show vibes. I was diggin’ Studio 52 and the coke spoon moon. i found one (1) nitpick, but i will save them till i complete the reading. Nitpick is the best word since it is about a difference, but it is not meant to disparage.

Am also caught up on #54, but this about a flagrant bump.

WW '77
This is my third time reading this series. I bought the first two volumes in trade a few years ago when it came out. I loved it because it was nostalgic to the TV series (this was life pre-DCU / pre-my-access to the WW TV series). By reading the series, I felt like I was re-watching the show.

For the tone of this series, I thought the shorter length of the stories worked. My takeaway from the first two arcs is that they’re aiming for quick, not-too-deep, stories that remind you of an episode of the TV show. I think this series is a fun way to read a quick and fun Wonder Woman story.

For a Discussion Question I’d ask:
Which story did you enjoy more: the first arc (issues 1-3, “Disco Inferno”) or the second arc (issues 4-6, “Who is Wonder Woman?”)?

Thanks for the pick @Nu52. I enjoyed revisiting this series.

I am still crafting my review of '77.

@AntLeon The Studio 52 reference killed me! It was a two-for-one special with that reference.

@JLWWSM Third time?! Whoa, then this must be a good one. I’m loving it so far

You’re so right. Either of these arcs could have been an episode for the TV show.

My answer to your question would be the same. “Who Is Wonder Woman?” had a lot of shocking moments that I did not expect. The action was fun and the story equally engaging.

Thank you for dropping by this week JL

@AntLeon That scene where Diana had one of the Bana-Mighdall and used her to shake Faruka was brilliant.

I’m waiting to discover more too. There definitely is a lot we don’t know yet. Faruka has been pretty interesting because of what you said. She totally is about protecting her people, but also driven by her own agenda. It’s interesting.

@biff_pow Welcome! Can’t wait to get your thoughts on the selection. Don’t worry about being “behind.” They’re super fun and fast reads

Yeah, the nice thing about these digital first comics is that you can burn through these super quick.

Speaking of, I finished the '77 issues (I actually did last night, wrote down my thoughts, and just before I hit post my laptop dies!

Overall I dug these issues well enough. I’m not really super into the TV show, but this felt like a faithful adaptation to the series while still adding a more dynamic and fantastical vibe that only comics were able to do. The first arc was pretty fun with the addition of Silver Swan, and the second arc had a whole lot of cool continuity mash-ups that was cool to see. The art was also really good, especially Drew Johnson’s who was able to really get the likeness of the actors down without going too into uncanny valley like what can happen in similar books like this.

@Jay_Kay That sucks! That must be discouraging as heck to lose all of your comment like that. Once I accidentally went back a page after typing my thoughts on a book and lost the entire comment too.

Marc Andreyko really did blend the TV aspects perfectly with the more comic book elements. These stories could easily have been an episode of the TV show. Drew Johnson’s art was really good, but I loved Jason Badower’s work the most in these issues.

This issue (#4) was just incredibly drawn by Jason Badower.

I bought the tpb, but I guess I hadn’t read it yet. The art is gorgeous in both stories! And I agree with @JLWWSM, I think the length and pacing is perfect. I liked the second story most because it was almost Journey Into the Wonder Womanverse! I’ve only seen a couple episodes of the show, so I don’t know how many of the characters are new to WW77, but I love that they introduced such a big rogues gallery so quickly. I thought using the lasso on herself was cool, too.

I can’t think of a good question, but Steve’s chest grossed me out.

Those WW’77 issues left me beaming with joy. Man, Marc Andreyko doesn’t get enough love for his excellent work. This series is a love letter not only to the TV series, but to all incarnations of Wondy.

Wonder Woman '77 was definitely a quick read. The only other reason to use the word nitpick is the shame of not being intimate with the source material. Not that it ruined the read for me. what happened is what usually happens when I’m watching a superhero based movie: (s)he is not supposed to be able to do that. And then i move on. And not that I was expecting more than one, but there was one per arc. more on that later.

I did like the art, there was a rotoscope element to it. Disco Steve looked a little unnatural, but i think that’s because he was drawn to look super when he is just supposed to be an “action man” with a pretty face. And by “action man”, i mean those characters as seen on TV that tackle perps, kick down doors, jump on/off most land vehicles depending on what’s appropriate based on velocity and desired end result, etc.

I did like the Russkies slur, but i think Commies would have better sold it. Mostly because the mission was to protect/reacquire a potential defecting asset. I liked how Steve and Wonder Woman picked up where Steve and Diana left off. Silver Swan’s backup was apparently for singing as well as the muscle. Wonder Woman smashing Swan’s crystal solidified the show vibes.

The second arc is what sold me on this run and look forward seeing more in future Wonders. I like that it was a big mash up of the show with the books. Julia/Hippolyte and Nessie/Drusilla. Among Cheetah and Giganta, there was a season 1 villain(ess). I like that my first Dr Psycho was from Gods & Monsters.

On the show, Wonder Woman’s abilities were bestowed by her belt. She would have to change in order to access said abilities. So the leap in the disco to make her change made me wonder. In the second, the flying. I make note not with outrage, because the show itself set up rules and stuck to them. Like all flying was via the invisible jet. Personally, I like that Wonder Woman can fly. and if i get more invisible jet like in last week’s trinity, i am very okay with more of said jet. Anyway, even the disco leap worked for the story.

Unfortunately i have no discussion question(s)

@biff_pow Seriously! That art is magnificent. It was cool getting to see the multiple Wonder Women interact. Imagine if they would have done something like that back then? That lasso bit always gets me. I love when Diana has to use it on herself. I haven’t seen much of the show either. Maybe a watch-along is long overdue?

I disagree about Steve’s chest though. Definite highlight, LOL.

@AlexanderKnox Marc Andreyko’s work on Manhunter was amazing. I loved it a ton. This is just completely different to his work on that book. He’s really versatile. Definitely a name that doesn’t get talked about when talking about talented writers. The multiple Wondys was something I was not expecting. It was a fun bonus. Had I read this before DC Universe, it would not have been a nod I much cared for, but because the Kathy Lee Crosby Wonder Woman is on here and I’ve watched it, I actually felt those guest appearances way more. I also didn’t know Julia or Vanessa that much before reading Pérez’s run on here. What a delightful series this is.

I actually have been thinking about bringing back Wonder Woman Wunday (Sunday)! We were doing it at 9am Pacific/12pm Eastern.

@AntLeon Oh, I get what you mean about the action man. I didn’t mind it though

That sequence with Wonder Woman v Silver Swan and Steve handling the crowd was neat. It definitely felt like I was watching an action scene from a TV show more than one from a comic.

I didn’t recognize one of the villains that had a cape in that scene. Maybe she was the one from the show? One of them was Dr. Poison, I believe, but the other one I didn’t know who she was. I did find the Gods & Monsters Dr. Psycho to be pretty intimidating. I like that Marc Andreyko wrote him into this story because he was also in the Manhunter series.

She’s still an Amazon. I don’t think that jump was too reliant on her belt, but I defer to you since you know more about the show. I just figured she wore the suit under her civillian garb.