We’ll be continuing our reading of the George Pérez run with issues #20-22. We shall also continue reading Wonder Woman’s Rebirth run with issue #53. 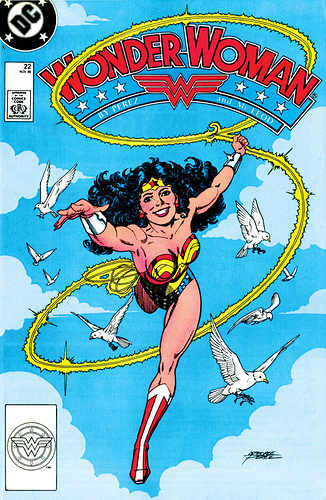 Dictated but not read.

Well I am the true King.

@AquamonC137 AquamAn is the true king.

short selection this week. Also, are there discussion questions missing? or no

Side question: when did it become Patriarch’s World?

WONDER WOMAN (2016-) #53
Did your opinions of any of the characters change from issue #52 to now?
Not really. I had forgotten Artemis was from the amazon splinter group. I am not really clear on Aztec’s abilities (Aztek?) other than a connection to the pantheon they are facing. I liked the taunting of the villian, because I assumed it was wordless.

What was your favorite moment from this issue? There were a few…
Artemis and Aztek having different take aways on their victory.
The perspective of the shadow god “always attacking” across time.
Artemis assuming she’s going to be turned in, presumably for re-education, and Diana says no.
That ominous queen who clearly has ill will in mind

I need to do my usual refresher on these, but I’m very happy with the selection for this time around. #20 is my favorite issue of Pérez’s run* and #22’s cover (the thumbnail here) is probably my favorite image of Diana.

*Though it occurs to me that in some ways, it reads more like a Batman story than a Wonder Woman story, since it’s a pretty straightforward detective plot without much in the way of mythological or supernatural elements. So, just because I’m partial to that kind of story doesn’t mean it’s necessarily on-point for Wonder Woman.

@AntLeon Yeah, shorter selection this go around. There aren’t any missing questions, I just forgot to change the numbering when I was copy/pasting the outline this week. I was planning on having another issue to go along with #53, but realized that story is actually more than just the one issue

@BatJamags I hadn’t thought about #20 like that. I do like the cover for #22. The blue of the sky is gorgeous. I’ve read #20, but now I want to go back keeping what you said in mind.

I felt i should keep it vague then to nitpick copy/paste skills.

@AntLeon Issue 20 definitely uses the narration really well. It did look like a lot of words, but as I was reading it, it didn’t feel like too much. Other issues have sometimes felt long winded, but this one felt just right.

Rereading issue 20 and I noticed the Batman/crime fiction/noir elements more. They definitely stood out more the second time around @BatJamags

That depiction of the interrogation scene is something you don’t always see in Wonder Woman stories.

I feel like I have seen this type of image for Wonder Woman before, but maybe not in this context. Here, it’s much more intimidating as she’s pursuing the supposed criminal. It reminds me a lot of Batmanesque panels where you just see his silhouette and maybe his eyes.

Also, I’m not sure why, but this image stood out to me. It definitely had a Batman feel to it. The shattered glass in this issue kept coming back and it really struck me at the end after Diana finds out the truth, but this image just really grabbed my attention even in my first read through.

there are no thumbnails, alas

I’ve been trying to post since Saturday afternoon and all of yesterday. Hopefully it works this time

I thoroughly enjoyed these comics this week. I don’t know what exactly struck me about the art this time around, but I just was enthralled by the visuals of both WW '86 and '16. ACO’s full page spreads/layouts were stunning.

I was honestly surprised. I should have seen it coming, but I really believed they were going to go the safe route of having Boyd kill Myndi. Even though I thought it was going to be the obvious path, I was still enjoying the story. When they revealed how Myndi really died, that kind of hit me hard. I was really liking her as a character and wanted to see more of her. We don’t get many female characters like Myndi in comics. It was fun seeing her work in this world of capes. It sucks how she spiraled and that we weren’t able to follow her story just like Diana, we were too busy with “bigger” things and I personally didn’t think the story would go there. The Silver Swan arc had a lot going on, but I do remember all of the characters pointing out the sleaze bag and that Myndi was off her game. I just put it out of my mind as other stuff popped up and then a whole other arc happened with Circe. I actually found Myndi far more compelling than Julia/Nessie & Steve/Etta. The art perfectly captured that Myndi was already dead, but again, I overlooked it. I thought she was just high, not dead, at that moment. LaRue still believed he killed Myndi when he died and he did have a hand in her death as he supplied her with the drugs. Myndi was really troubled, but darn am I going to miss her in this book.

It’s tough. I can see where Hellene is coming from. She’s like the only one we heard any dissent from, but clearly others felt similarly since when the results were announced, there was no applause or anything of the like. I don’t know. I just keep going back and forth on it. It’ll be cool to see Julia and Nessie visit. I wish we could have seen Steven Trevor and Etta Candy go as well. I mean, the one time they wouldn’t feel tacked onto the story and they’re MIA. I do like whenever Superman, Batman, or other Leaguers show up on Themyscira, but IDK if regular civilians really need to be there.

I was actually enjoying the scene with Julia and Vanessa’s teacher. That was funny. I just always thought they were going to reveal Julia as a lesbian or bi character. I would like to see how that date goes after they reschedule. I mean how can Julia pass up a trip to Themyscira? He’s gotta understand.

Vanessa is okay. I don’t care for Eileen and the guy she has a crush on. The cheerleader girl and Nessie hating on her was not really necessary. It’s cool that she’s not this perfect student and does have insecurities. It’s much more palatable when not bombarded with a ton of similar characteristics being attributed to most female characters in a single issue. We get a good variety of characteristics when it comes to the men and women in these issues.

I liked Nayeli more. I think I liked Artemis less. She just has that superiority complex, but she doesn’t even really do anything that proves she’s this major BA. She couldn’t even wield her own weapon because it was burning her. That’s a pretty cool bow though. I’m still not sure how Nayeli hacked it, but our three leads wielding it was pretty awesome. I like the idea of Naylei having the memories all of the past Aztek’s. I probably mentioned it the last time, but it’s kind of like Avatar (Airbender not blue creatures) where she can tap into her “past lives” even thought they’re not really her past lives. Tezcatlipoca was cool. Him being all big gave me Power Rangers vibes that made him cheesy, but the images ACO put together and how he did the layout of the entire pages was some of my favorite stuff I’ve seen of all of Rebirth Wonder Woman.

I really enjoyed the page where it had a lot of panels that looked as if they were going off of the page on page 14. Page 13 was really cool too. I loved when Tezcatlipoca was explaining how he was different from the New Gods and the Olympians (which I’m still not sure if he’s older than the Olympians or if he’s stronger than them?) and then you see all of the Tezcatlipoca across the Multiverse and the different Azteks and Wonder Women (?) all fighting him at the same (?) time.

Hey nu-52
I’ve been reading Perez’ WW on my own. Just saw this thread. I’ve been stuck in comics, haven’t gotten to community til about 3 days ago, just saw this. I would’ve been so in, especially since you’re doing new 52 alongside it. Maybe I’ll jump in & read the next stuff if u don’t mind. I love Perez’ art in his WW run. From what I’ve gathered upon reading in this community, seems like most people either love it or dislike it. I absolutely love it. The style is so unique, it’s almost like if u ripped out a random pg from anywhere in his run u would know right away, with no other clues, that’s from Perez’ WW run. Oh well, that’s all. Just hadn’t “spoken “ to u in a while thought I’d put in my 2 cents & say Hi.

@djd187.81432 Jump in whenever you’d like! I’d love to have you on board and get your thoughts. Pérez’s art is incredible. I love it more and more as the series goes on. It’s definitely a distinctive style and I enjoy it.

I know! I hadn’t seen you around the community in a bit. Glad to “hear” from you again

Also, you can stay up to date with book clubs and other events by going to https://yourdcu.com/cal
It’s easier to access in a browser on a computer, but I hear from the grapevine that Community 2.0 will have links you can actually click on!

@AntLeon Yeah, it’s sad. Myndi seemingly “had it all”. Very tragic, but not uncommon.

Starting small is definitely the way to go in regards to the Amazons inviting people onto their shores. I wonder how this will all play out. I actually am not sure if Myndi would have made the list. Diana mentions in these issues that she wasn’t as close to her. Maybe they should have invited Myndi to Greece

Now that you mention the accents in the word bubbles, I had a hard time reading Boyd’s dialogue at times. They really played up his accent.

I’m not entirely clear on Aztek’s powers either. She’s able to tap into a lot of stuff and I’m guessing she’s super strong. I like when she made a shield bubble when the villain was trying to stomp her. It reminded me of Android 17 in Dragon Ball Super

I liked all of those moments that you mentioned too. I’m actually excited to meet the queen that we saw at the end. She has a cool look going on.

Sounds good, thanks for the invite. Glad to hear you’re a fellow Perez fan.