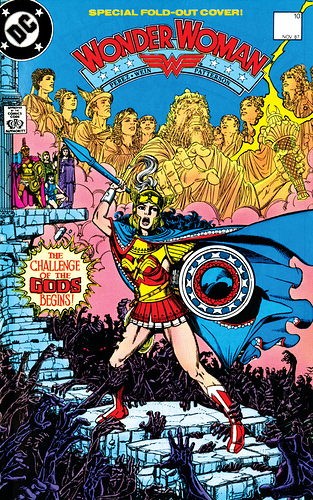 The gods are their own soap opera. Which is actually a good depiction. Another bullseye is how they do not like to take no for an answer.

@AntLeon They definitely have a god complex

I’m excited to see what they come up with for Diana and how she deals with the challenge.

Sidenote: These issues (and the next two) were scripted by Len Wein, so if the dialogue is more hammy and Bronze Agey than usual, that’s why.

1: The challenge was interesting, though I think it takes up more issues than it warrants for being mostly monster fights, which we already saw a pretty substantial amount of back with the introductory arc.

2: The gods were the ones who abandoned the Amazons in the first place, and then they have the gall to say the Amazons have to prove themselves. It’s kind of ridiculous, but their hypocrisy and bizarro logic seems to be both intentional and very much in-character.

3: This is probably my second-least favorite part of the reworked Post-Crisis origin (after the “Diana is a newbie” retcon). It’s convoluted and unnecessary.

4: While this is probably the weakest story arc in this run as far as I’ve read (especially with the Millennium tie-ins feeling very out-of-place), I will say it has a ton of cool, trippy imagery during the challenge. I think my favorite is actually Cottus right at the beginning, with the staircase turning out to be his spine and the hundreds of hands reaching out of the darkness.

6: It could be an interesting idea, but it felt rushed. There’s just suddenly this new ultimate threat that’s dumped in our laps with very little development. As much as I hate what decompressed storytelling has done to comics’ pacing, this thing felt like it went too far in the other direction, rushing from plot point to plot point with only the bare bones of characterization or tone. I think I’d need to go read the original series to actually figure out what’s going on, and when you have to read a Grant Morrison comic to figure out what’s going on, you may as well not bother.

7: I’m actually not quite sure what you mean by “deep cuts.” Could you clarify this question?

All in all, while I found Justice League Dark #1 and Wonder Woman #51 to be pretty enjoyable, I think this is the first new issue we’ve covered that I actually disliked. Aztek is bland, Artemis is generically edgy, and Diana just kind of follows the two around. This feels like the kind of story that would be an overarching plot for a longer run, or at least a six-issue miniseries, and Orlando decided to charge ahead with it anyway even though he only had four issues. It led to a lot of telling-instead-of-showing, like Wonder Woman saying she’s friends with Artemis, but neither of them actually demonstrating that, or characters mentioning their connection to Atalanta but not having any flashbacks to generate any actual impact from the fact that she’s in peril.

@BatJamags Ah! Thanks for that side note. Puts some things into better perspective.

I’ll have to get back to you on the other points as I read on. Thanks for sharing your thoughts with us this week

Len Wein has actually been scripting the book since at least issue #2 or 3. Before that, it was Howard Porter who was helping with the dialogue part.

Yeah, for my Post-Crisis readthrough, I’ve been trying to catch all the crossovers, but Millennium doesn’t seem to have been digitized. A little odd, since absolutely everything tied in with it at the time, and we have both the previous event (Legends) and the subsequent one (Invasion!).

(Though - and I assume this is just a typo - it was Greg Potter, not Howard Porter. Porter’s an artist.)

@BatJamags Something was different about the dialogue in these issues though. Maybe I just hadn’t noticed before? Maybe it’s just the gods that bring it out more?

@Jay_Kay Thanks for the clarification!

@BatJamags Thanks for the second clarification

@BatJamags Yup, that’s odd. You’d think that they’d want to have all of the big moments in DC digitized. It’s strange to see all of the books around the events available, but not the actual event.

I can agree that Aztek wasn’t fleshed out enough to be interesting. I don’t read the Red Hood books, so I’m not sure how Artemis is depicted there. If they’re just trying to keep her personality in line with that depiction, I get it, otherwise, Artemis did feel too generically edgy. It would have benefitted from flashbacks. They could have shown them while the dialogue would have acted as a narration.

I’m slacking a bit, but i just wanted to catch up. Also i wanted to ramble on about the gods. But i don’t have time. I forget why Zeus’ word is law, whether it was by lot or because when they divided the world, his part gives him top billing (Zeus::sky, Poseidon::the seas, Hades::the underworld). The amazons have to submit because while it was not he, but the amazon clique that gave them new life, and they worship the entire pantheon. The clique have to submit because of Zeus’ word as stated previously. Zeus’ predicament is that first Diana said no and then he got caught with his proverbial pants down.

@AntLeon Zeus is such a creep. I hope karma comes back to him and Pan. I’m glad Diana rejected his advances and it was thanks to Man’s World and all of her friends there, like Julia, teaching Diana about consent. The way all of the gods just bow down to Zeus really makes them unlikable too.

I was happy when Hippolyte chose Diana over her crown and being loyal to the gods. Her questioning why she was loyal and to whom she was loyal to was a nice moment.

I have no idea why the gods give Zeus top billing in this canon, but in myth isn’t it because Zeus, Poseidon, and Hades took down the Titans? I need to refresh on that lore. I’m actually starting to think that Ares might not have been entirely wrong in targeting that pantheon.

I do know that when the olympians defeated the titans, they divvied up the world (see the parenthetical in my last post). And i wouldn’t be surprised if Zeus tricked Poseidon and/or Hades so that his piece also puts him in charge.

Chronos, the leader of the Titans (not those Titans), tried to eat all six of his children (Zeus, Hera, Poseidon, Demeter, Hades, and Hestia) but Rhea swapped out Zeus for (I think it was a rock?), and Zeus returned, defeated Chronos and rescued the other five (who had been eaten, but weren’t dead because reasons). Zeus got to be in charge because he was the big hero of the whole affair.

Don’t know if that’s precisely how it went down for the DCU’s purposes, but that’s how it ran in the original mythology.

Just finished the main issues (man, for a sorta mini-vacation, I was kinda busy!). Honestly, outside of a few good moments, I felt like this was the weaker part of the book that we’ve read so far. The plot seems really flimsy and not just to justify Diana showing up for this Millenium crossover, and a lot of things seem to just happen with the only explanation being “destiny” or “Gaea.”

“What are your thoughts on the challenge(s) set by the gods?”

I mean, the stuff in Dooms Doorway mostly felt like a gauntlet, nothing too terribly fresh or memorable. Possibly the most interesting “challenge” was Hermes getting Diana to avenge Pan’s death, and that was done off-panel!

“Do you believe the gods are in any position to test the Amazons and Wonder Woman?”

“What are your thoughts on the connection between Steve Trevor and the Amazons?”

I didn’t really fell there was much of one. It literally says in the issue that the only reason Steve was put on that mission was that Ares thought it would be ironic in an Alanis Morrisette kinda way. Like, there definitely was a connection with Diana Trevor, and it does help explain some of the stuff in WW comics, like her costume color scheme and the gun being on Themiskira, but it’s way more elaborate than necessary.

“Which was the standout moment/image for you?”

I would definitely say the introduction of Diana Trevor in her Amazon armor. She makes a great splash and just looks cool as hell at that moment. 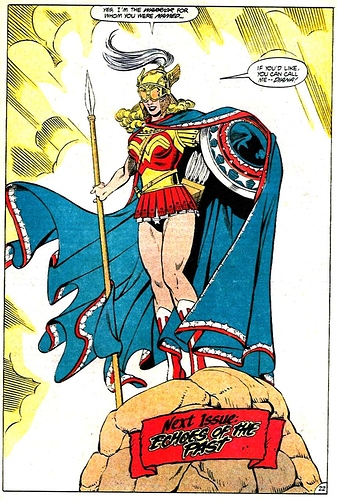 All that remains is #52 and i will have completed the assigned reading.

Smoking on the airplane

Hermes’ revenge probably appears in something more Millenium related. Which is probably why it hasn’t been uploaded yet. it is all over the place. I am thankful of the continuity from the challenge to the next issue, first panel, “mission accomplished!” yet still feel kind of ripped off…

the thou’s and ye all’s weren’t too bad. a little rough, but is seemed to fit. or rather it didn’t feel out of place.

@BatJamags That makes sense as to why Zeus would have the power initially, but these gods just let him run them even after he started going mad. His leadership allowed Ares to almost kill them off. They need to get their priorities straight.

@Jay_Kay I feel the same about this issue as you. The plot was full of choices after choices that I kept questioning. It’s strange comparing this arc to everything before it. What a stark contrast.

I actually got excited to see “Pan” get his after how obnoxious (putting it lightly) his character has been this entire run. I thought that we’d at least get to see that. We really need Millennium to get digitized. It’s weird that a Manhunter would choose to hide amongst the Olympian gods. Did he join before or after Ares was going to wipe them out?

That was disgusting. I couldn’t believe after all of that they tried to play it off like, “Oh, he was mad.” No. The forgiveness stuff got old fast in this arc. Flimsy excuse for Heracles and even flimsier for the conclusion to Zeus’ story. Hera just decided he was good and the other gods just accepted it.