Welcome to the inaugural World of Wonder Book Club!

This Wonder Wednesday we will be taking a look at the first 6 issues of the iconic George Pérez run as well as the first issue of Justice League Dark. 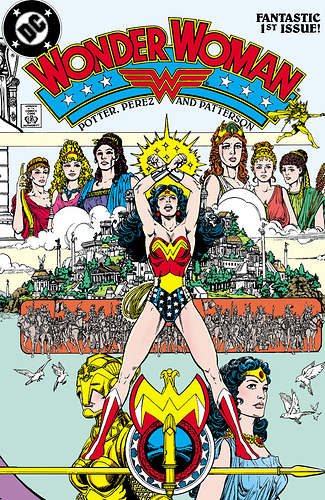 Awesome! I’m definitely in for this club.

I’ve read this first arc of the Perez run fairly recently, but I’ll go back into it just to get some of the details straight. I will say that it’s a strong take on the character, even if some of the decisions made aren’t exactly the original.

I will sneak onto the Island for this one. @JL the second issue #1 has an extra splash page in the beginning along with a WW article at the beginning and end.

I’m excited! Strong takes/bold takes can be great. Thanks for joining in. Always love your input

Ah! Got it. I’ll have to check that one out then. Can’t miss out on a good splash page!

I actually just read these WW issues last week I’ve been trying to read chronologically thru everything on the site starting a little before Crisis and have been looking forward to the Perez run, which I hadn’t read before.

I dont have a ton of history with WW in fact I think this is probably the most I’ve ever read of her series but so far I’m hooked. I like the idea of making Steve Trevor older and Perez does really well bringing in the Greek pantheon and all these familiar elements in new ways. I like Ares as a big bad and appreciate Deimos and Phobos as smaller players in his plot, and the way she “beats” Ares was interesting, showing him that the fruits of his labors leads to his worst nightmare. I was pretty small when these came out but old enough to remember a lot of the nuclear panic just inherent in the pop culture of the day.

I’m not the greatest when it comes to picking out the negatives but I’m sure someone will help with that, so far it’s just left me ready for more.

Oh my goodness so sorry @nu52

I addressed you as JL. (your both awesome and love WW) My head is still a little foggy from being sick. Also Splash page might not be the right term but its a twofer, I think its the cover and the back together.

@FalknerGreaves That is quite the undertaking! I commend you on putting in all of the effort to read things chronologically on this site across multiple titles. How are you enjoying that so far?

Wow, you forget sometimes about the fact that a lot of these historical events happened fairly recently. The nuclear panic is something I’ll keep in mind as I read these issues.

LOL @AquamonC137 It’s fine. The amount of times I have seen you addressed as AquamanC make up for it

Gotcha, I’ve seen the image you’re talking about. I still might check it out later for the other added material you mentioned.

Ooh, I LOVE Perez’s Wonder Woman. I’ll have to reread the introductory arc and look into the JLD issue, but I’ll definitely be joining in here.

I really liked JLD, but am not caught up. I’m glad it’s finally starting to come to DC Universe.

Congratulations Nu52 on taking on this club! Now there’s just one last icon from DC that someone needs to start a club for some day… but who would dare pick up the heavy crown???

Thanks a lot @Don-El.
Crown? I think you mean cowl for that third icon LOL

Lol… Yeah you and Vroom have definitely grabbed the tiger by the tail, very exciting!!

Well, I mean, if you guys want a Batbook Club, I could maybe make that happen…

2: Before I read this, I’d read up on the character a little and knew some stuff from more Justice League-centric adaptations, but her continuity wasn’t my strongsuit. Since then, I decided to proceed through the Post-Crisis series in publication order. I’m still in the middle of Perez’s run, though, so I’m not really up on some of the other influential runs like Greg Rucka’s, Gail Simone’s, or Brian Azzarello’s.

3: This is a hard question to answer, because there’s so much to like. I think I like Perez’s idea of casting Wonder Woman as a quasi-celebrity public figure. In relation to the Trinity, Superman shies away from public recognition because of his humility and Batman thrives on anonymity and misdirection, but unlike them, this version of Wonder Woman isn’t just a hero. She’s an ambassador, and while she’s not egotistical or interested in the fame itself like someone like Booster Gold, she has a message she needs to communicate. This continues to drive a lot of the character drama as the plot goes on. It’s something that’s fairly distinct about the character, but doesn’t feel like a gimmick.

4: Ares is in some ways just an OK villain, and in some ways a perfect villain. Wonder Woman is pursuing a mission of peace, so obviously, her enemy is war. Ares is a great villain in that he is the personification of war, and, in the end, the fact that war is self-defeating and pointless. That said, I find him a little bland as a character. He’s just kind of generically sinister. Later in the run, I found the Cheetah to be a much more engaging villain.

JLD
5: Eh. Tynion made the plot work, and Wonder Woman is magic-themed. I think it’s actually a pretty good idea to let her branch out into different kinds of mystical adventures from just the usual recycled Greek mythology concepts. Still, she did feel like kind of the odd one out. For the moment, I think the idea just needs some time to develop.

6: Definitely Zatanna. I think she ended up being written a little weak in order to push the plot forward, so that was disappointing. I think she’s done a more than adequate amount of angsting about her father already. Compare this to her short-lived solo series from just before the reboot. That take had a certain cocky charm that this version seems to be lacking so far.

7: For Wonder Woman, George Perez is my favorite DC artist, so I’ll take this as an opportunity to gush about how amazing he is. One thing I always notice is that he’s really good at giving every character a distinct facial structure, so even if he drew everybody shaved bald and in black-and-white, you’d still be able to figure out who’s who. He must just have an unbelievably steady hand to bring out the level of detail and consistency he does. There are a ton of tiny lines in any given image, but it never looks cluttered or scratchy like some artists. I think his actual best work was on Terror of Trigon from New Teen Titans, but this story arc is up there, especially since he redesigned a lot of the characters for it.

JLD’s art was solid, and the body horror was well-done, but I didn’t really think it was anything special. The colors were good, though. They really set the mood.

Funny, I was thinking about doing a book club for Batman as well…

A book club for Batman would be hard to do though. He doesn’t have many comic runs.

@BatJamags Your name already lends itself to a Bat themed book club. Maybe y’all can alternate weeks @Jay_Kay? Like @AquamonC137 said though, the amount of material for that character is very slim. You’d have your work cut out for you trying to spread that content out past a couple of weeks.

For justice league dark I actually love the fact that WW is on the team for once and James tynion is doing a damn good job with her in my opinion and is one of my favorite series. Alvaro martinez bueno’s Art I’ve never seen before in other titles but in JLD he definitely captured me and impressed me