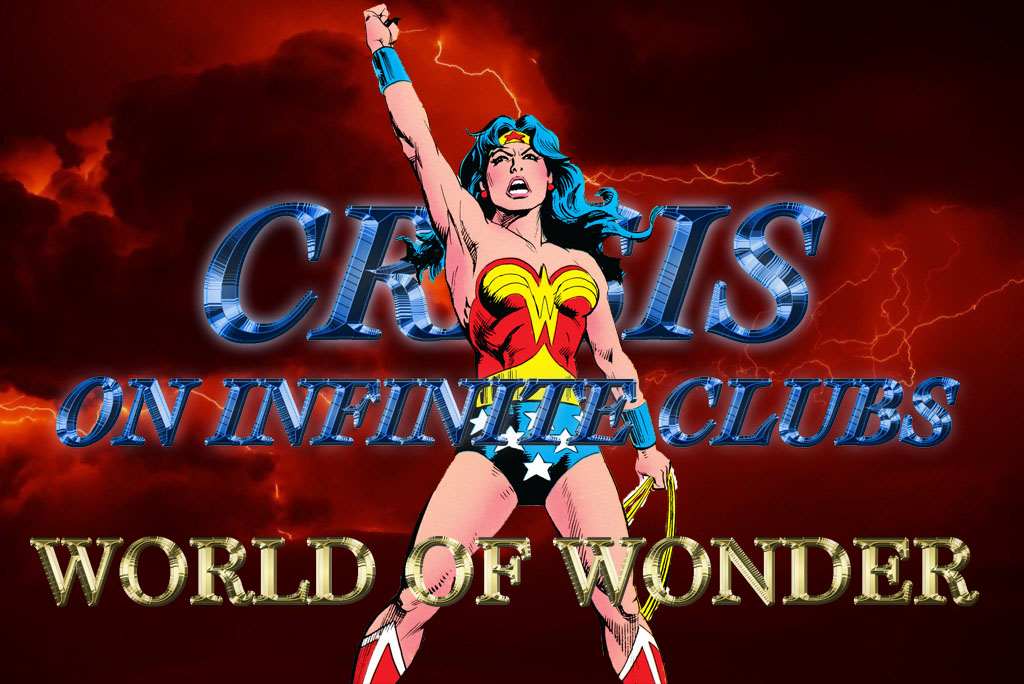 The prelude to the Crisis! If you missed the announcement, a Crisis is coming to the Clubs of DC Universe. The News section will also be updating the event as it unfolds.

Join World of Wonder as we explore what happens right before Wonder Woman enters into Crisis! The Monitor and Lyla are up to something… Worlds will live, worlds will die and the universe will never be the same.

@WorldofWonder We are kicking off our part in Crisis on Infinite Clubs this week. Join us and share your thoughts about the reading

My first thought is that I dig what you did with the Crisis logo. I’m in to see what WW is up to.

Thanks! I’m excited for the whole event. I’ve never read Crisis before.

First off, seconding the logo! Now I’m tempted to try to make one even though I have zero photoshop skills. Maybe I’ll just be super-cheap and use this one. 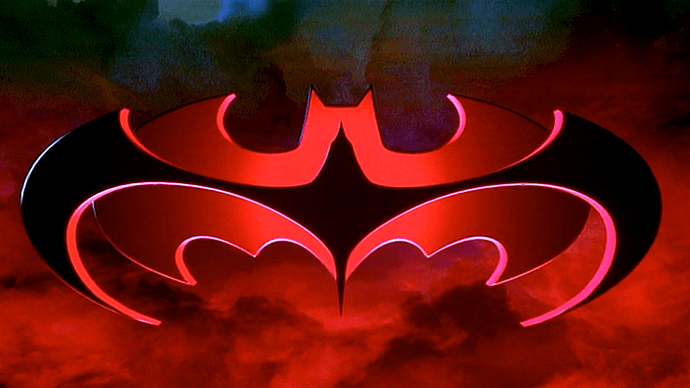 And first time? Hope you’ll be reading the whole thing with the extended Book Club for it, I’d be curious to read your thoughts.

Thanks, Jay! That’s actually a pretty sweet logo you posted.

I’m for sure planning on reading Crisis with the club that will be covering it. I’m super interested in finding out more about it through the coming weeks

It is, I just think it would be funny because that is actually the logo for the infamous 1997 Batman & Robin movie.

I love that movie

I have watched it way more than any other Batman live action film. Robin (Nightwing) in red is 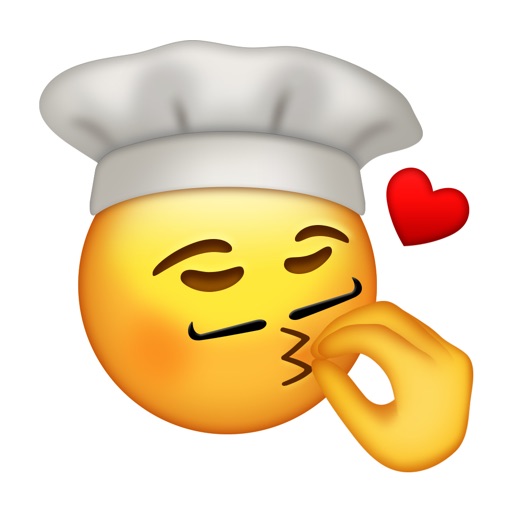 Lunchtime was Wonder Woman time today. Really liked the issue when Etta was Wonder Etta. It’s so tough to get a good Etta story, but I really liked this. She stood up for herself but physically and emotionally. The villains were very good, and enjoyed the completion of the issue. The downside was Steve’s “little buddy” and his child sidekicks was really not good. That aged the books more the presentation of women did in the books. I’ll have a few more thoughts later, but I’m really interested in what’s bugging Etta?

Only read the first issue so far, but I took some screenshots of panels that caught my eye 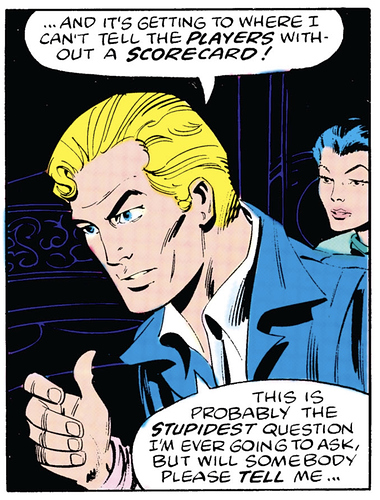 image1270×1668 1.22 MB
Steve Trevor aptly summing up how I Feel when reading the Crisis storyline. 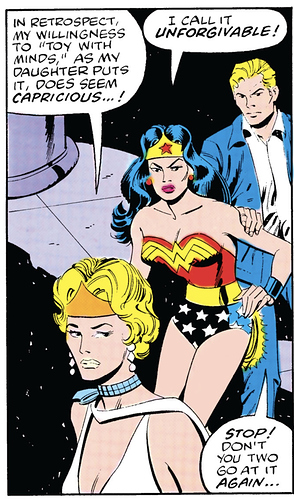 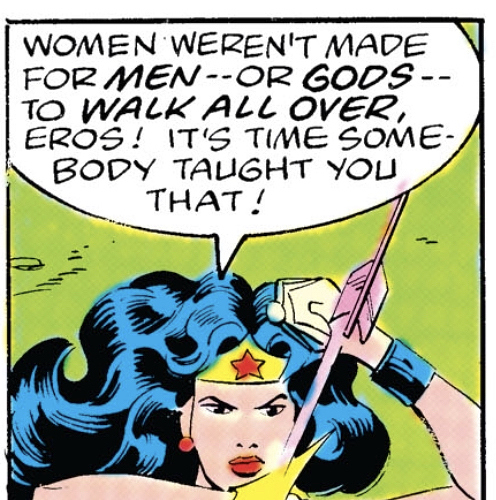 This panel right here exemplifies what I love about Wonder Woman stories. Even when they’re horribly dated by old sexist ideas, the story of Wonder Woman, Paradise Island, and the Amazons is one we rarely get in any media. Shes indomitable in mind and spirit, full of compassion but ready to dismantle hatred. Occasionally I prefer a less “perfect” rage against the system, but OG Wonder Woman is the fantasy of every little girl (or every little person, honestly, who has dealt with prejudice and discrimination) to be stronger and better than their oppressors.

She is a desire to not only escape the bonds that hold us but to help others escape too. To destroy the chains in the first place so they can never again hobble human beings unjustly.

@msgtv LOL, lunchtime is when I get my reading on too! I do like when Etta has a good story. I can see what you mean about Steve’s little friend

I was relating to Steve so much when he said that.

Hippolyta really was trying to just sweep her actions under the rug. “Sure, I played with your memories and erased your greatest love and best friend right out of your life, but no biggie.

I also loved the panel where Wonder Woman tells Eros that women don’t exist for men/gods to walk all over. There is another comic of Wonder Woman that I read where I wish she had said that to Zeus.

Wonder Woman is the fantasy of every little girl (or every little person, honestly, who has dealt with prejudice and discrimination) to be stronger and better than their oppressors.

She is a desire to not only escape the bonds that hold us but to help others escape too. To destroy the chains in the first place so they can never again hobble human beings unjustly.

Such a great point you bring up! There’s a reason why Wonder Woman has withstood the test of time and continues to be relative today.

How did you feel about Steve Trevor’s story in the first issue?

I really don’t have much experience with this era of Wonder Woman, so all this stuff with parallel worlds and resurrecting as gods was a bit to take in. It’s interesting, though for new readers I don’t know how well this works.

I will say, if WW 1984 is set on bringing Trevor back, doing it via Aphrodite or Eros in a similar vein could work.

Yeah, it was a lot. If having Steve’s memories made Eros go mad, would the same not happen to the other Steve?

Honestly, I wasn’t terribly impressed with any of them. You had the four costume-types just kind of dancing on the Monitor’s strings, the generic alien invaders, and we didn’t see enough of Montez to get a clear idea of what his deal is. I guess Eros’ power trip was reasonably threatening, but it was basically a super-slugfest.

This was probably the most interesting part of the first four issues. I’ve never really seen the two so clearly at odds, and it made for some interesting drama.

Are there any quotes, panels, or scenes you found particularly compelling?

It’s a small thing, but I liked the game the two reporters played with the quarter in the fifth issue. It was a cool visual.

So, worth pointing out that the first four issues were written by a different writer from the last, and the difference was like night and day. In Dan Mishkin’s issues, everything felt kind of confusing and I didn’t really feel like I had any particular reason to care about most of the characters. The last issue was written by Mindy Newell (who, as a sidenote, scripted a stretch of George Perez’s run that we haven’t gotten to yet; some good stuff in there), and she managed to work in more characterization in her one issue than Mishkin did in his four without sacrificing pacing.

As another sidenote, these issues had the sloppiest coloring I’ve ever seen in a professional comic. I have no idea what happened with that.

First off, I love the image you created for this topic. It looks amazing!

I thought it was a creative way to bring him back. He’s imbued with the memories of the previous Steve. I really enjoyed the Steve vs. Eros fight. Eros needs ta’ chill.

I like Eros because he was passionate about what he wanted. He was wrong, but passionate.

I understand why Diana needed to walk away for awhile. She felt betrayed.

One of the fun things about the multiverse is watching people discover they’re in a multiversity, like this panel 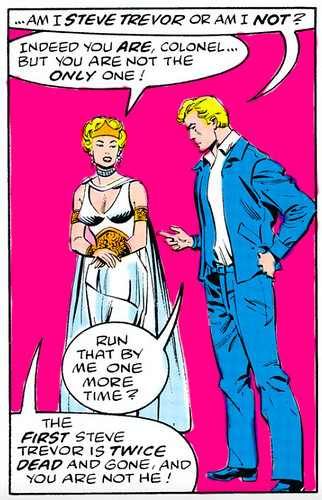 This surprised me and made me laugh because I was not expecting the hologram to be so big, given how small the gremlin was 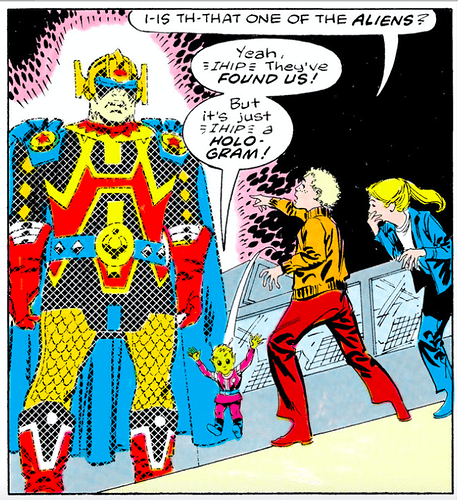 I’ve heard there was a Captain Wonder, but seeing is believing. 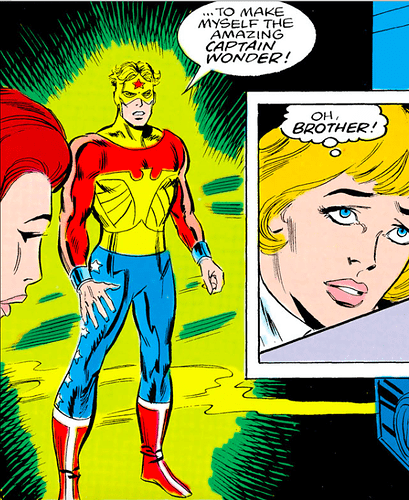 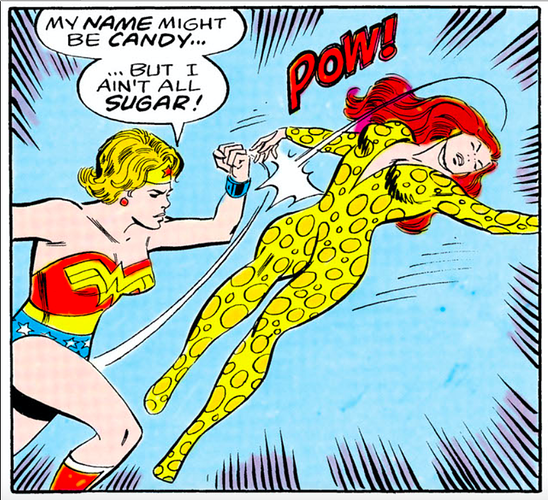 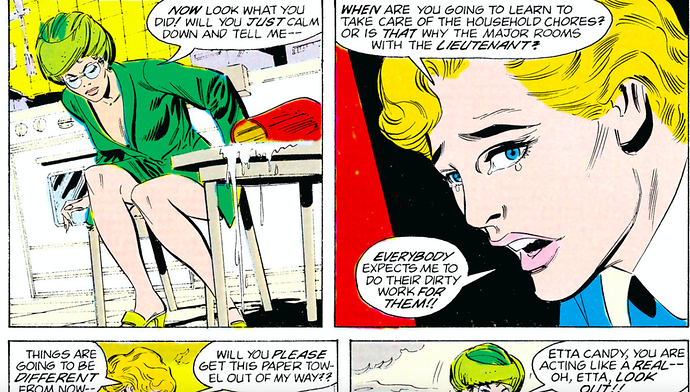 I think when it’s hippolytA, she’s blond.I am not sure if we’ve met a post perez …Diana’s mom.

Eros was wild! He definitely had passion, but misplaced up the wazoo.

I know you’ve read New 52 Wondy, didn’t Eros growing remind you of Strife? I know Giganta does it, but here it reminded me of Strife when she was on Themyscira.

Totally get Diana’s feelings. Hippolyta didn’t even seem to realize why what she did was wrong.

People discovering the multiverse exists is great, but I have never seen a story where someone from another Earth doesn’t realize they’ve been living in a different universe. That’s wild and borderline scary to think about.

Captain Wonder looks good, too bad the one we got was not Steve, but instead the Doc. It’s funny though, when they make a male Wonder Woman he’s always fully clothed…

Thanks for stopping by JL! Love reading your thoughts

didn’t Eros growing remind you of Strife? I know Giganta does it, but with it reminded me of Strife when she was on Themyscira.

I totally didn’t even connect those dots! Strife is so fun and terrible in the New 52 run that I just put her in a class of her own. But now, that I think of it, yeah, they both grew in size!

Double standards, for sure!

Glad to join! Thanks for hosting