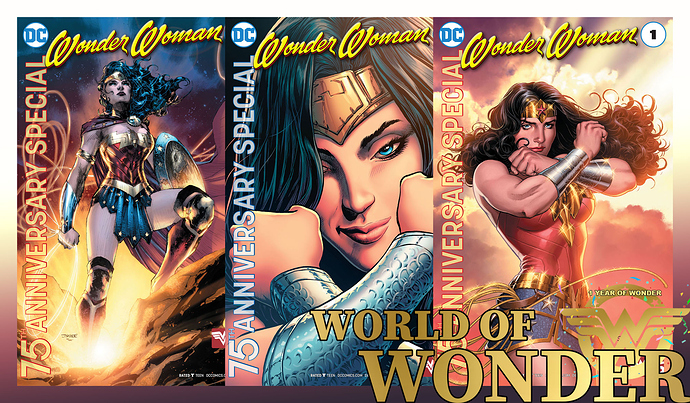 World of Wonder is celebrating 1 Year of Wonder on July 31st! Join us in celebrating our one year anniversary by reading “an immense special issue celebrating seventy-five years of the Amazing Amazon,” Wonder Woman 75th Anniversary Special (2016-) #1 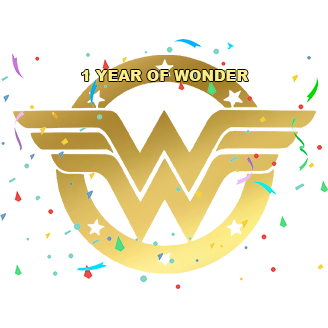 Woo woo! Thanks for being a part of our first year

Congrats on the one year anniversary! Here’s to many more to come.

Happy Anniversary! I am very proud to call this club “home”.

Congrats on the anniversary, folks!!

I would tell you how much I really love this club, but you already know that. Oh, what the heck, love being here at World of Wonder.

Thank you @Jay_Kay! Can’t wait to congratulate you and the World of Bats here in a bit. You’re all doing a great job.

@AntLeon You’ve been part of this club before it was even a club and we were just reading JL: Gods and Monsters! I am very glad you’re able to call this club “home”.

@BestBeastBoy Thank you! TTG BB is hilarious. I love that gif.

@Green.Lantern Thank you so much!

@msgtv World of Wonder is lucky to have you! All these great gifs!

@Razzzcat Another great gif! Y’all have the gif game on lock. Thank you!

Seriously, this club is what it is because of all of you. I feel like I’ve dropped off a bit as a leader ever since around March, but you’ve all been there ready and willing to start the conversations and lead discussions and pick up WALs I couldn’t attend (@VonterVoman). You’re the best club members I could ever ask for.

Meh; your actual participation may be down, but you keep coming through on the weekly selections. And yes, I have stressed on creating a bootleg watchalong thread some Sundays, but I have yet to overstep that boundary. And now it’s the first wonderful anniversary. With a month of events planned. And gifs. Brava, my Leader. Brava.

SN: that TTG BB gif is only made by Silky.

Question: Giganta has always been a Wonder Woman adversary?

because i might have been corrupted by the superfriends…

Yes, she was created by William Moulton Marston and first appeared in Wonder Woman comics. She’s always been a Wonder Woman rogue.

You will have to keep me posted should you come across my …moment of corruption.

I am up to the Lois Lane interview. With all those words, I took a break because my eyes are notorious for closing with whatever tablet I am using to read.

On the first half of these issues:

“Give Us Strength” is probably my favorite of these stories. I love Rafael Albuquerque’s art in general from his run on books like American Vampire, but I loved how he was able to set a great mood and really highlight Diana’s grace and power. Plus there’s just something about WW in WWII that just feels right, you know?

“Predators” was…okay. Kesel draws it very well, of course, but as a WW story it doesn’t really do a lot other than reminds us that Diana is also part Doctor Dolittle. Honestly, I was more impressed with their ability to do that story in as few pages as they did. I’m currently procrastinating on writing an eight page script for a writing class and let me tell you, even eight pages is tough to squeeze in a story that feels at least semi-complete.

“One Side Alone” was really good. I loved how they explored the idea of justice in this world, with the extra WW twist of being able to compare the system of justice of Man’s World to her own culture, both when she was born and when they first started out.

“Wonder Woman In Conversation” kind of feels like Rucka went “what if I copied that one amazing issue of Phil Jimenez’s excellent run and filled it with half-implied, half-thought-out thoughts on the idea of truth?” It’s a unique idea in theory, but it just didn’t land well with me – though I don’t know how much of that is from me just really not being into Rucka’s modern-day part of his Wonder Woman run.

@nu52, I feel your assistance could be beneficial over Here with recommended WW reading.