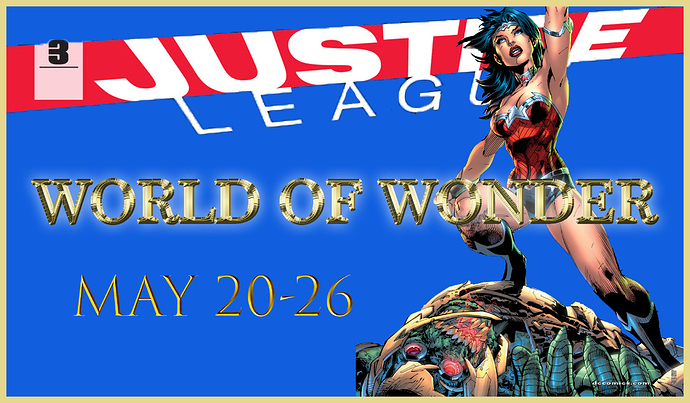 Join the conversation and with the new DC Universe Rewards, it could even net you some points for reading and discussing! 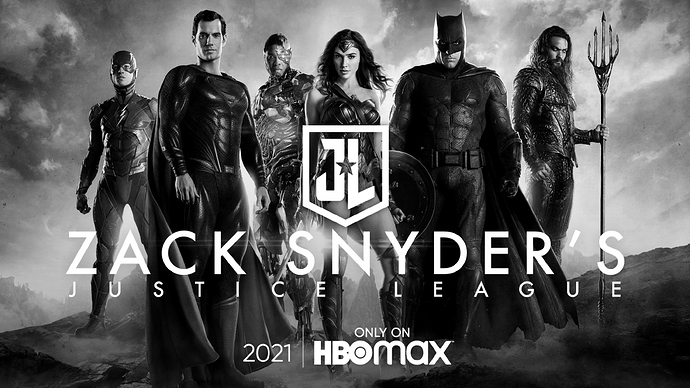 Are you excited about the new announcement? 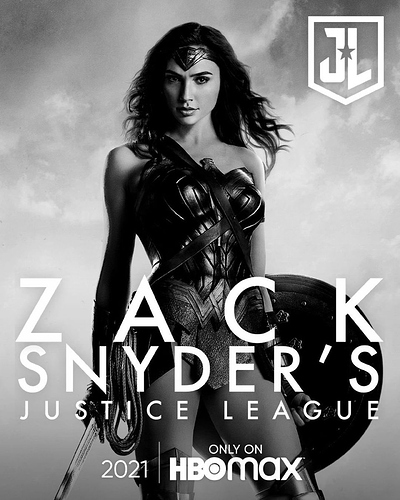 Same here! It’s been years since I last read it.

A quick read having read it a couple of times before, but this time I was definitely more focused on Wondy and her role in the story. She’s fun playing the displaced warrior/fish out of water role. Her hair looks awesome, but she actually isn’t given a lot to do compared to any of the other members. This is in part because we intro Bruce, Hal, Clark and Barry first over a couple of issues, then she’s essentially sharing page space with them plus Arthur and Vic. As the flagship title of the New 52, all of the characters seem to have the slightly rougher personality of that era which makes them seem a little off, but still enjoyable. And, come on she looks kick butt here. 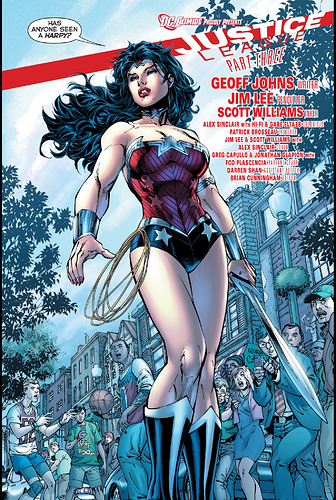 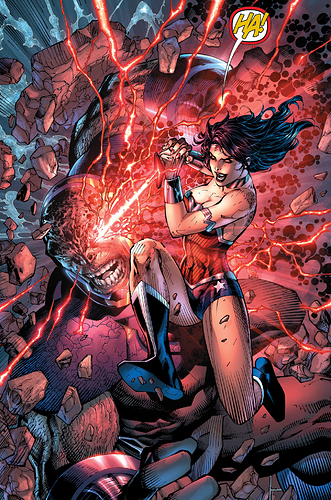 I believe this arc is the basis for Justice League: War. Which would explain Jason O’Mara voice for Batman. Definitely a decent roster for the League. I liked this Aquaman “Who’s in charge? Because i nominate me”.

I liked the mention of disappearances and the word Shazam. And that it is Flash with the Super Seven name.

Justice League 1-6:
Haven’t read this in a while, but was glad to revisit. The roster is pretty standard. I’ve always felt JL was woefully lacking in female members, and that hasn’t changed. Maybe the logic is that Diana is woman enough to carry the torch for all the women…I guess??

A good intro to the League, yes. Although I do wish Diana had a bit more to do, the moments she did have I enjoyed. The feisty new-to-mans-world angle still charms me and makes me laugh. Diana is a true blue lionhearted champion, and this captures that, so I can’t complain.

“(never fear citizens lol) Harpies are NO bother once their heads are severed.” or “It’s settled— WE BLIND HIM! and

”This cook is truly blessed!” 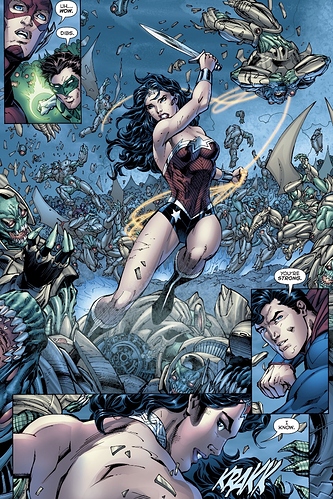 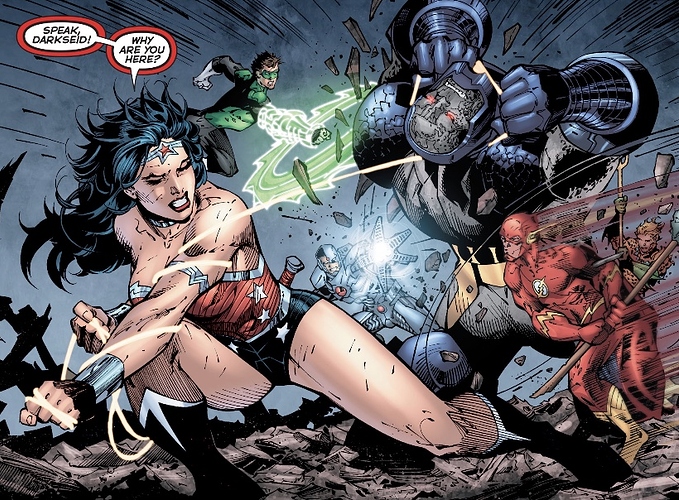 Another Aquaman moment, right before being called the Super Seven: “This is Atlantean scale mail. you think i’d pick orange?”

I realize the focus should be on Wonder Woman. It is this Wonder Woman, at least the movie version thereof, that most spoke to me. Kind of impulsive, brandishing a sword, it felt very Amazonian. The movie also laid down some SuperWonder foundation(s) with Wonder Woman comparing the rest of the heroes to the Olympians, “but I’ve never met anyone like you.” I was more intrigued with the comparison than the ship potential (i’m a passive shipper).

So i said all that to say that similarly, I am liking this take on Aquaman so far.

Finally finished this up – which is odd because when you do read them, they move pretty fast (just juggling a lot of clubs I guess).

Overall a very fun read, if a little rough around the edges. I remember reading a while back that Jim Lee was actually doing a lot of the plotting of the book during this run, which might explain a bit of that.

For Diana herself, it’s interesting. I think when people describe Diana in the New 52 as some sort of heartless barbarian (and yes, it does happen fairly often), it’s mostly because of these six issues. She’s definitely more battle happy than other iterations. It isn’t like she isn’t without her more heartfelt or compassionate moments – little moments that come to mind are her being the first to notice that Cyborg isn’t a threat, and her declaration of love for the planet when facing Darkseid, but she reminds me a bit more of Zealot from Jim Lee’s WildC.A.T.S. as often as I am reminded of Wonder Woman.

As for the questions on the book in general:

I like it – it’s essentially the classic members of the group. The only big deviation in this book is the inclusion of Cyborg as a founding member, which I’m honestly all for. It’s a move for diversity, sure, and that’s not a bad thing, and I think Cyborg is a great candidate for it – he’s his own hero, not related to the others, and his being half-man, half-machine has potential for how tech-heavy our world is today.

Really, the only downside with how he’s implemented in this role is that they did it while taking away his history with the Titans, which is a big part of what people love about the character. I feel like they didn’t have to sacrifice that part of him to make him part of the League.

Honestly, I feel like the animated adaptation of Justice League: War is a better story, because it plugs in some of the plot holes (like how did Diana get from Washington DC to Metropolis?) and balances things out with the characters a little better.

I liked how it took pretty much all of the League to work together to finally get rid of Darkseid. Everyone plays a role (very appropriate, because that’s apparently how it was handled in ZSJL as well).

In terms of Diana, I would definitely count that declaration of her as a champion of Earth before stabbing him in the eye.

Really, there’s just a lot of really good moments in this book, even if they don’t always add up together.

with respect to Cyborg, since they are making this his origin, from football star to the half man-half machine we know and love, it kind of makes sense to make him a founding member. plus the tech is apokolips (sp?) based which adds a new dimension to his abilities. even if that dimension is strictly being able to boom tube.

I also like my Diana a little more battle ready. or battle hungry if that fits. It’s agrees with my Amazon head canon. But what I also understand about her is that she is a thinking hero: if a problem can be solved with talk or something that doesn’t require fighting, she will try it.

the only weird thing with the art, and that’s if weird is the right word, is that the men’s faces kind of look the same. and that would be the Caucasian faces in particular.

I also liked that Flash and GL knew each other.