Thanks for sharing your story. It’s amazing how much art can help people through tough times. I’m glad you’re in a better place, CSD. I have a feeling that Jessica is one of those characters that will stick around in multiple mediums for decades to come. I think my favorite Lantern is still between Hal, Laira, and Aya.

Actually Laira is my favorite lantern! I wish that she got more time in the spotlight. She’s so badass

Art really is such an amazingly therapeutic medium. Art has been a huge part of my life and comic books are a big part of that! I actually did a project in school when I was in patient communication and we were learning about how to help chronically and terminally ill patients come to terms with their illnesses and I studied using comic books as a form of patient therapy. The results are actually really amazing. It almost seems harsh, but as a healthcare provider, I can’t tell patients anything along the lines of “don’t worry” or “I’m sure you’re gonna be ok”, etc., because I don’t know that. It sucks but saying something like that is essentially the same as lying to your patient because you can’t make them any guarantees. But when I can offer them something therapeutic that speaks to them and helps them with what they’re going through, I know that I can offer them some comfort. I like to offer comics when I can as that kind of therapy because it seems to have such good results with people of all ages.

That’s incredible. Comics definitely appeal to a broad age range. It’s really interesting hearing how you utilize art and comics in your career to help people. Not all heroes wear capes.

Thanks! I think it’s really cool too!

The second bonus question is available now on my scavenger hunt event BTW! I just put it up a minute ago and I’m gonna be posting the last bonus question on the 13th. Figured I’d give you guys a little inside info since you’re my club buddies

Thanks for the heads up! I didn’t realize about the bonus questions. I was waiting for the 20th to come around

BTW, if anyone wants to go check out the scavenger hunt:

Welcome to the maiden voyage of the Coverart Scavenger Hunt!

We will get started on January 20th, and the Hunt

will continue for one week, ending on January 26th. Each day I will be posting 3 questions, and each question will be accompanied by a scavenger hunt clue. This is where the coverart comes in, but I will explain that part here in just a minute. You will have to solve the clue in order to …

Thanks for the promote @nu52! I can’t wait to see who comes out the winner

Just have to read the article.

You know what? I put a lot of spoilers in here, and I was going to go through and try to hide them all, but I’m just gonna hide the whole thing lol. I don’t wanna give anything away to anyone who isn’t done reading yet

Heck yes, I do! It’s really cool how this issue seems to lay the groundwork for a lot of things to come, in particular, the exploits of the Flash. Great article!

I really think that I would enjoy that. I can already see a number of ways that it could go. She could be a serious character that stuck around for a whole story arc, or she could even just be part of a special and I think it would be equally as fun.

Absolutely! I love seeing main cannon characters having alternate Earth adventures. I wish we saw more of it. Especially with her versatile nature and magical origins, Wonder Woman is a perfect character to jump into alternate Earth scenarios.

Personally, I’d say don’t worry about spoilers for the current reading because spoiler discussion begins as soon as the event goes live.

I agree with sooo much of what you said. Grail definitely comes out of this event as one of the highlights and more interesting characters. It’s a shame more hasn’t been done with her. I really hadn’t remembered just how much she was trying to be good. It did seem like she had given herself to the darkness there, but her sadness over her mother and her wanting to do right by the baby do show she’s not lost that inner battle yet.

I understand what you mean about the Metron and Owlman section. That part felt tacked on in a way where the other open-ended segments did not. I feel we had enough foreshadowing for the other portions that would serve as setup, but I didn’t really feel that from Metron/Owlman.

I agree that the backstory featured in flashbacks of Myrina and Hippolyta giving birth at the same times is quite memorable. DC Universe really should have that sneak peek on the service because it fills in a good portion of that night that we don’t see in the main JL series or in the one-shots.

Yeah, it’s wild that Wonder Woman was in a way a precursor to the Flash.

Don’t worry about posting spoilers. i want to sleep on it before i answer the questions. I also have some context with respect to the Batman cliffhanger.

I did like Diana as narrator. the specials were more about the shifts in power and who got what.

I forgot to mention i saw Diana’s JLD in a new to DCU Flash selection.

Especially with her versatile nature and magical origins, Wonder Woman is a perfect character to jump into alternate Earth scenarios.

Yeah, I’m surprised that three isn’t more Elseworld/alternate stories focused on Diana. The only one I can think of is Wonder Woman: Amazonia, white she comes to Man’s World during the Victorian Era.

Thankfully we’re stuff to get more, such as Earth One, The True Amazon, and the recently starting Dead Earth.

let me say that tihs about GL Cruz: she is new to me, so without knowing more i can neither like nor dislike. I did like her in JLvF5 and that JLOdyssey spoiler also bummed me out, but knowing a fate and having it play out are two (2) different things.

Is it told whose ring she inherited? I liked that line: ‘does this sector really need another lantern?’

well shucks y’all sorry everyone, I did blur the spoiler

Cruz got her ring from Power Ring, a member from the Crime Syndicate in Forever Evil, if memory serves me right.

Close, it was the first arc of Justice League after Forever Evil, when Luthor and Captain Cold joined the team.

Which reminds me, a thing that always felt like a missed opportunity in this part of Johns’ run was how they underutilized Captain Cold in this run. He really only plays a small role in the Amazo Virus arc, where he does have some pretty good interactions with Wonder Woman. 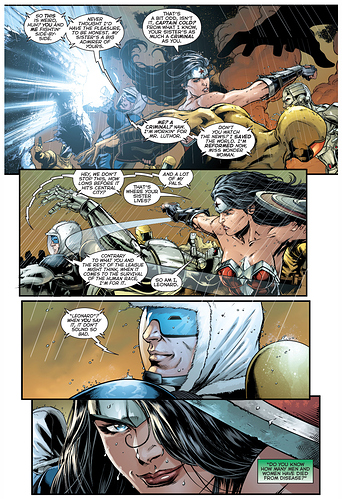 I believe AntLeon is asking which Lantern she inherited her current Lantern ring from that she gets when she’s “revived”. As far as I know, it wasn’t mentioned.

Spoiler for AntLeon and anyone who hasn’t finish new52 JLah yeah unless they got into it in rebirth, I thought it was just self manifested and thats why hal and john were puzzled by it. I think he was talking about the power ring because he said he was unfamiliar with Cruz

was close, haven’t read them since they came out. And yeah waste of Cold just being a bodyguard