This week, World of Wonder will visit BATMAN/SUPERMAN/WONDER WOMAN: TRINITY #1-3. With Batman Day just around the corner, what better time to explore these books? 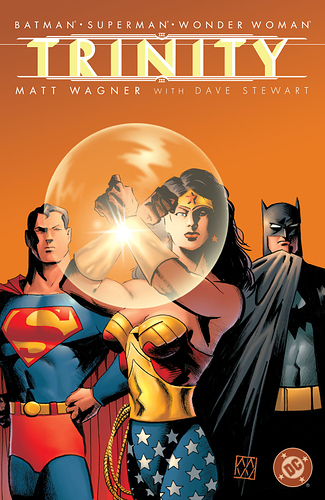 Nice! I vaguely remember reading this Trinity miniseries way back when I started getting into comics, but I don’t remember much about it. Looking forward to revisiting it and continuing the Perez run.

Oh snap, I’ll be here for the Trinity.

@Jay_Kay I’ve always wanted to read this, but just never got around to it. The art looks great.

@AquamonC137 Yay! Glad to have you on board this week

I just got started and the first few pages just blew me away. I still have to finish #1. I probably should not have started that Adventure Comics with Connor. and not because it was its own doozy.

@AntLeon I know, right? From the first few pages, you know it’s going to be good.

Okay, just finished up these issues. Great stuff all around.

It was definitely an interesting combo, but one that works out. Ra’s was good as the overall evil mastermind (though DAMN did they up his creep factor whenever he was around Diana), Bizarro worked great as the muscle, and his calling the Demon “Racer Cool” is way too precious than it ought to be. Artemis was kind of the weak link – like she kind of appeared out of nowhere and didn’t contribute much other than giving Ra’s the location to Themyskira. It’s funny, at first when she showed up, it had been so long since I read this that I thought that was Diana, and that she first comes to man’s world in this take as a double agent against R’as.

This might sound odd, but I initially really liked the butting of heads, especially between Wonder Woman and Batman. Considering where she comes from, it does make sense that she might initially find him to be what she fights against – and lord knows Batman doesn’t help much in that matter. The sudden make-out was…a decision, one that I kinda get what Wagner was going for, but I’m not sure how well it worked.

The idea that Diana feels a connection to the Lazarus Pit was pretty interesting, an idea I hadn’t thought of before but works very well for Diana, especially with this particular origin.

For Wonder Woman, so far I would probably say Perez’s version in terms of takes meant to be in continuity at one point or another.

With Batman, Year One is a classic, one of the best superhero stories ever, even. however, I did really enjoy the thrill ride that was Zero Year very much.

And with Superman, my favorite would probably be the New 52 version through Grant Morrison’s run on Action Comics. His Superman is always a great mix of modern and timeless, and that continues to be the case there.

Also, I really do enjoy the takes on all three characters in the Earth One series of graphic novels.

There’s a lot of pretty good stuff here, though honestly for most of it, it was mostly because of the art for me. Brian Bolland’s opening and closing pages were well done, and it was really cool to see Arthur Adams doing DC work this early in his career. And you can never go wrong with Jose Luis Garcia Lopez on art.

Though I think overall my favorite was the last story dealing with Myndi’s last will and testament. This definitely felt like a better send off for her that I was looking for when it first happened, and felt authentic and real.

Honestly, I really don’t like it. I get that Perez is trying to connect everything to this cosmic, mythical destiny, but in the end I feel like it cheapens Julia as a character and gives this feeling of Amazonian Exceptionalism that just doesn’t feel right.

It’s certainly a more quiet visit for Julia and Vanessa than it was for Batman and Superman, but that’s certainly not a bad thing. Quieter, character-driven issues like this not only helps with the pacing of these kinds of books, but makes it so when you do see these characters in action, you feel more invested in their outcome.

@Jay_Kay My take on the Batman Wonder Woman kiss:

Randomly…
I was never a fan of the invisible jet
Wonder Woman’s biker shorts were a nice touch
The medal Bizarro receives from Racer Cool is on the Bizarro character in the game DC Legends, which prompted the “so that’s where that came from” thought

That’s a classic Silver Age thing for Bizarro. At one point he creates his own Bizarro World with backwards versions of everyone in the DCU and he wears the medallion to signify that he’s the original.

Which will now prompt “well, that explains a lot”, another favorite moment of mine

Ra’s creep factor caught me by surprise. The stuff I have seen him in (animated/live action) usually depicts him as respectful, so that was different. I haven’t red much of him though. Bizarro was adorable. Every time he called Ra’s Racer Cool, I cracked a smile. Bizarro’s parts had a tinge of sadness because of how he was being manipulated into believing they were his friends.

I really liked the Wonder Woman/Batman clashing scenes. The kiss was strange. I didn’t really get how the island made him feel like that or whatever was happening, but I was glad Diana decked him

The Lazarus Pit’s connection with Diana was something I hadn’t thought of either. I liked the line that Hippolyta says regarding it later on. She says Diana is a creation of life, not a corruption of death the way the Lazarus Pits are.

Sure, but also did you have a favorite first meeting of the Trinity? Like in animation or the live action version we got in BvS or another comic?

I like your picks of each of their individual origins, though I’ve not read that Superman one yet. I should get on it. I need to revisit Batman: Year One. I haven’t read it in a while and mostly remember the movie.

This was actually the first issue for me of the '86 run where I liked the art and it was pleasant, but it didn’t really stand out. There wasn’t a panel that captured my attention. I really couldn’t even tell different artists drew it if not for their names being included at the start of each chapter, I would have thought they were all done by the same person.

Myndi’s chapter was great. I love that they found a way to have her there because of course she would be extra and have a whole video. I think it’s nice that she made a separate version for her family and friends and left the business stuff for a later time. It could also be nice to have that memory as their last instead of the one where she OD. We really got to see into Myndi’s life through this one chapter and it was cool that it didn’t try to paint her as a saint in the end. It kept true to who she was and that was a flawed person that had good intentions. Her brother summed it up perfectly.

Yeah, just last week we were saying we liked her because she was so normal in this crazy world of gods and monsters. It’s not as contrived as the Diana Trevor stuff, IMO. This, I could at least see as it was established that Julia is Greek and knows much of the gods, etc. The Nessie bit that seemed to come out of nowhere now makes sense.

I agree. It’s also interesting seeing every new person’s reaction to the island and the Amazon’s way of life.

@AntLeon I loved the invisible plane. I thought it was really cool that whenever she came out of it, it looked like a portal. Superman saying that before realizing it was a doorway into a plane was funny.

I also didn’t really like Wonder Woman’s shorts, LOL. They looked mismatched with her armor, like she was going to a spin class and didn’t have time to put on her full armor.

That moment where Bizarro’s medallion breaks is so sad. 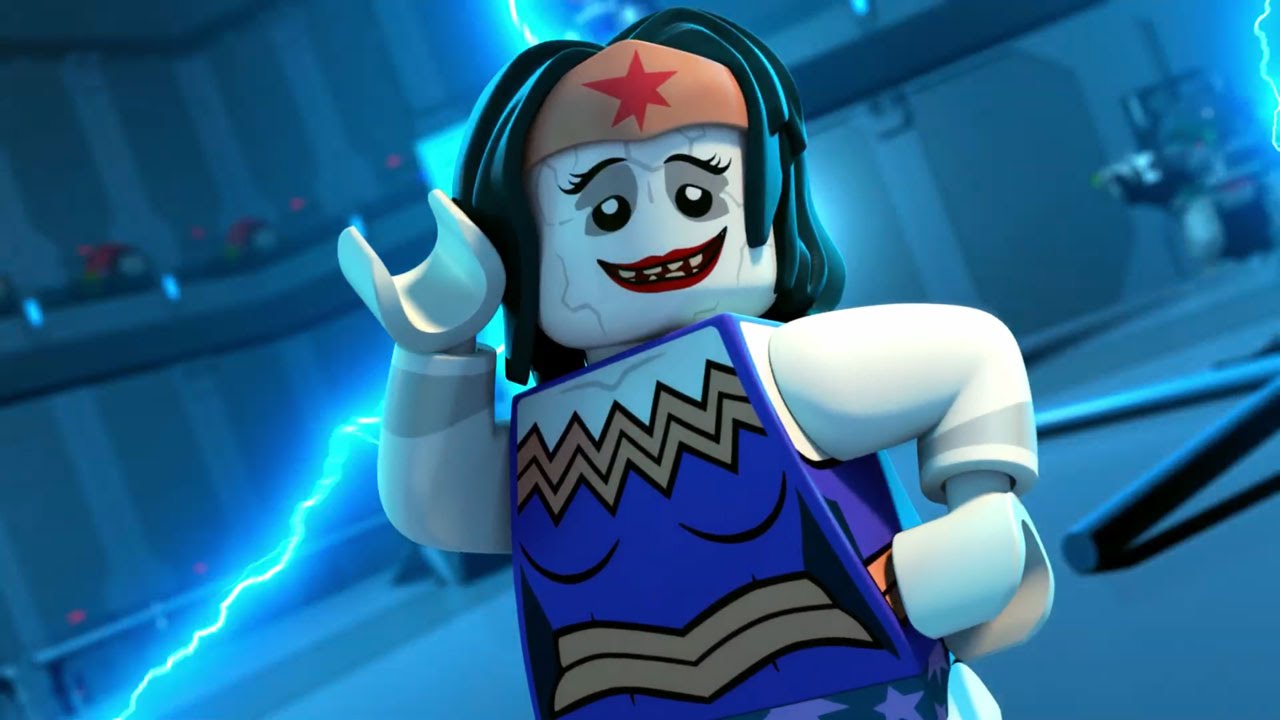 The portrayal of said plane was done well, so i will neither whine nor cry outrage.

LOL, I guess. The way she was drawn was good, so I am fine with the shorts. They just looked a little mismatched, but not a big deal.

The best guess I could think of to explain what was going on with the kiss scene was that it had something to do with Diana coming out of the Lazarus Pit. When she immediately comes out, she’s shown to be exceptionally radiant and both Bruce and Clark are affected by it. I guess that even when she’s recovering from it in Themyskira she still has a bit of that and Bruce is reacting to it.

I get what you mean now – it’s funny, I can’t think of a lot of other places that shows all three teaming up for the first time outside of the two you mentioned. JL:TAS did it pretty well. I honestly really do love BVS – it’s got it’s flaws, but I love it’s ambition and what it was trying to do. The scene where all three are together to face Doomsday is truly an iconic moment, IMO.

The only other one that comes to mind is the Geoff Johns/Jim Lee Justice League, but the interactions were more on Superman and Wonder Woman, really.

On the art side, I can kind of see what you mean about most of the artists, but I’m surprised that Arthur Adams didn’t jump out since his style is WILDLY different from the others. To me his art in this period is sort of a transition from the more classical style we see in the 80s and the more over the top and wild style we’d see in the 90s with a hint of animation influence. 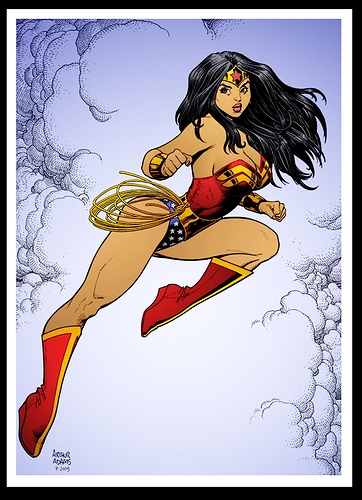 The shorts thing reminds me that my first real exposure to Wonder Woman as a character and what made me an initial fan of her was actually Frank Miller’s take on her in Dark Knight Strikes Again, where she wears a similar outfit. 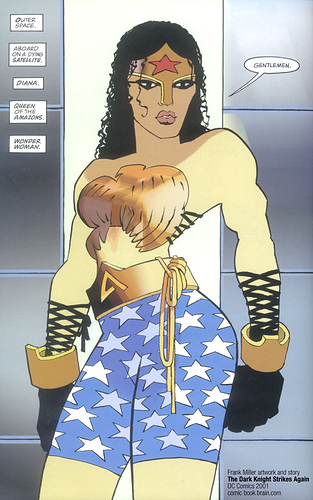