Greetings fellow DC fans! Are you a collector of action figures, or otherwise just have an appreciation for them? Is Superman your favorite character, or maybe you just have an appreciation for him also? Well, this thread’s for you. In the comments following this section, I will list what I think are the best Superman action figures (no particular order). This is not meant as a review, historical perspective or anything…ahem…professional. If you want in depth reviews, you will find many online for all of these, all from folks that are much better than I am at reviewing stuff. Just a fan having some fun talking about two of his favorite things. Is there a figure I should have listed? Is there one I shouldn’t have? Please, join the conversation and let’s geek out over some Superman toys

. Due to the format of this forum, I just kindly ask that you give me a chance to post everything and then open the floor for discussion. Oh I should also note that all the pictures are from Google image searches, so can’t take credit for any of them. 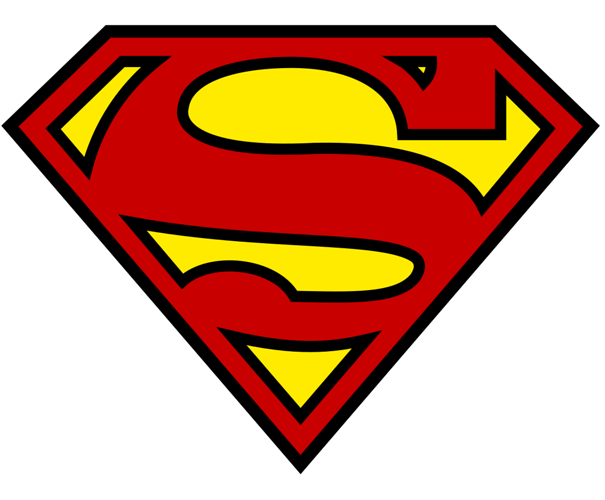 Hot Toys - Superman The Movie
One of the ones I wish I had. This figure is on top of most collectors’ lists of Superman action figures. I’m not aware of any figure that comes as close to representing the Christopher Reeve version of Superman as this one does. The cloth goods outfit is not only movie accurate, but hides all the joints. At 12" tall, it’s a big one that needs a little bit of room to display, but man what a beauty. Long sold out, and ebay prices are sky high. 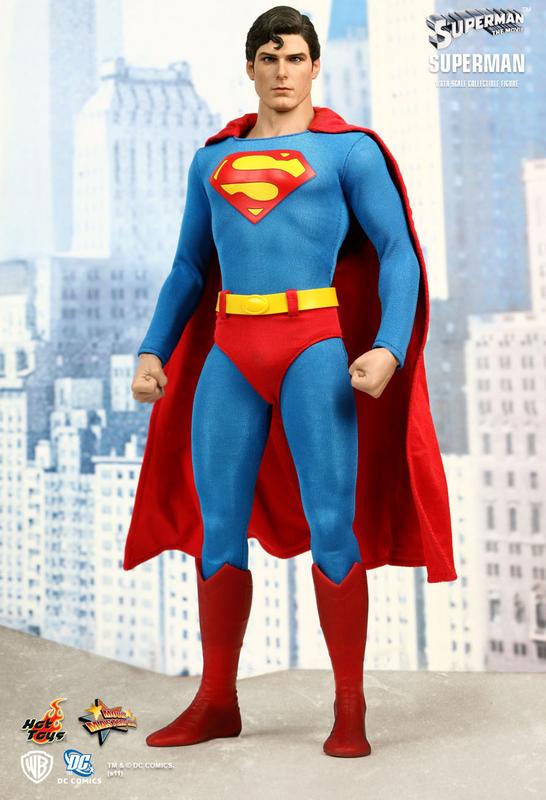 Mezco - Classic Superman
Mezco One:12 Collective figures are like mini Hot Toys. Same concept of high quality, great articulation, and cloth goods outfit in a much smaller 6 inch scale. There are no belt loops, but despite this nitpick it’s probably my favorite 6" figure. The head sculpt is fantastic. He has a bulk to him that I love to see in a Superman figure. Just feels great in hand. When I look into my cabinet, my eyes always go to this guy first. 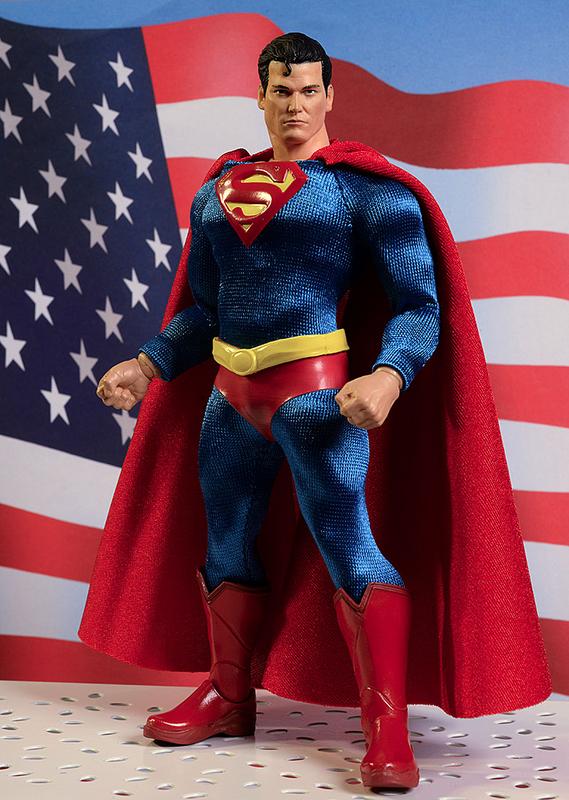 DC Collectibles - DC Essentials Superman
An affordable Superman figure, collectable quality, great articulation, classic comic book design (based on Jason Fabok art, I believe). I would say this is the best all around “general” Superman figure out there. If you must have one in your collection…this is the one I would recommend. Just wish they painted those belt loops! 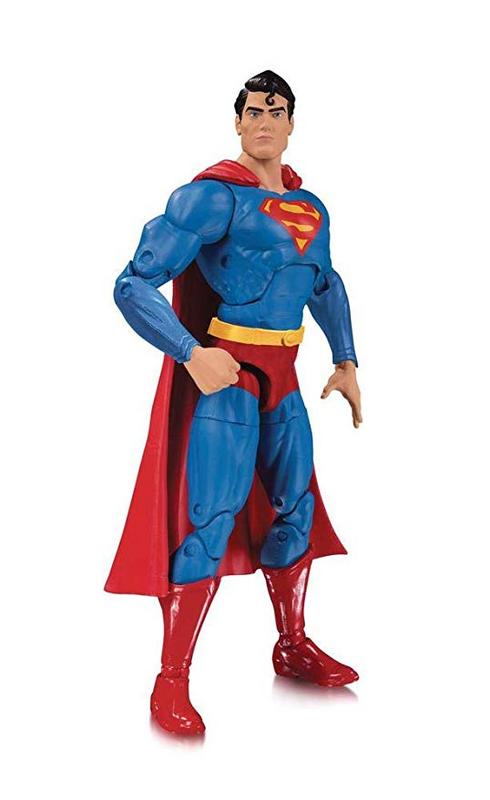 Kenner - Super Powers Superman
Aaaah…a trip down memory lane. This little 4" figure was THE Superman action figure for kids growing up in the 80s. We didn’t really have anything else for Big Blue…or at least I didn’t. Squeeze his legs and he punches…actually one arm punches while the other rotates back…kinda like he’s running…but it’s a punch! There’s even a yellow S on the back of the cloth cape. Many of us see this and are transported back to days of pure innocence and Saturday morning cartoons. 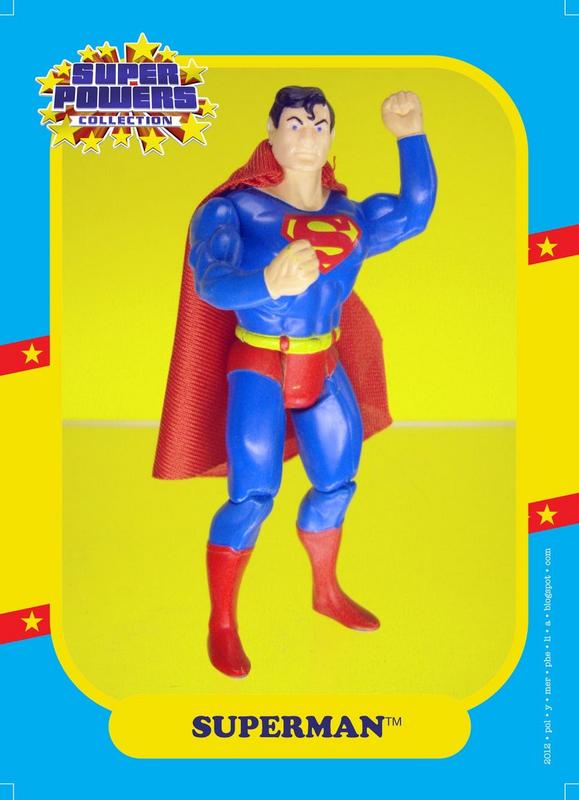 DC Collectibles - Trinity War Superman
This guy came in a 3 pack with the other big 2. It’s a metallic repaint of the DC Collectibles New 52 Superman…I just happen to like the metallic version more. It’s how I picture that futuristic armor in my head. Articulation is limited, but the sculpt is fantastic and captures the Jim Lee design very well. Best New 52 figure for Superman in my opinion. Coulda went with a better facial expression, but that’s ok! 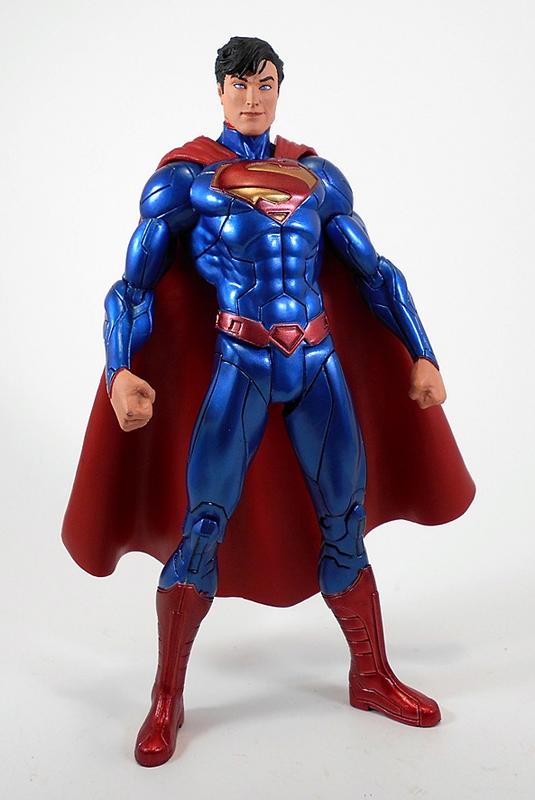 Mafex - Justice League Superman
I don’t have this, but I kinda want it. Why did I list it? Well…Mafex are known for their hyper articulated figures. So many poses you can get this guy in. Also, looks fantastic with a great Henry Cavil likeness to boot. I think the costume was shinier/brighter in the movie, but that would be my only nitpick based on what I’ve seen. This would be my pick based on articulation. 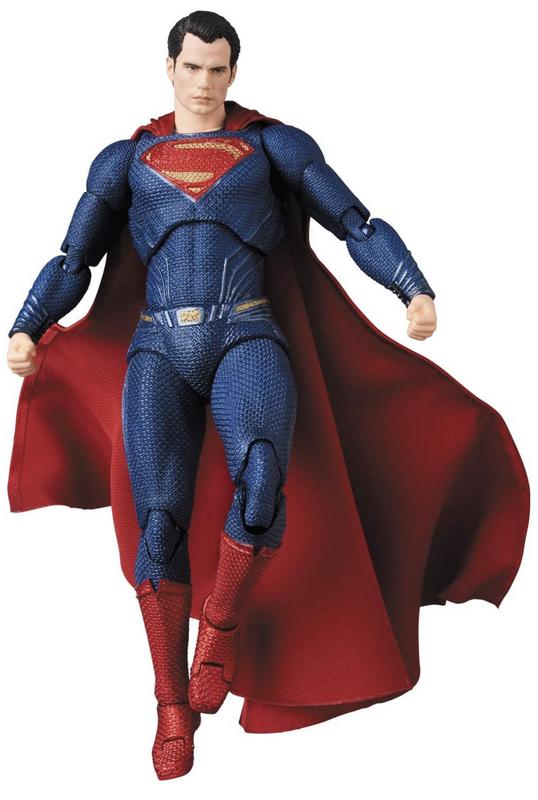 DC Direct - First Appearance Superman
DC Collectibles did an amazing job taking Superman off the pages of the earliest comics into action figure form. The cloth cape was a great choice given the vintage nature of the design. Again articulation is limited, and it has a certain pre-posed nature. Is it the most impressive figure on this list? Hardly, but what it lacks in sophistication it makes up for with old school charm. 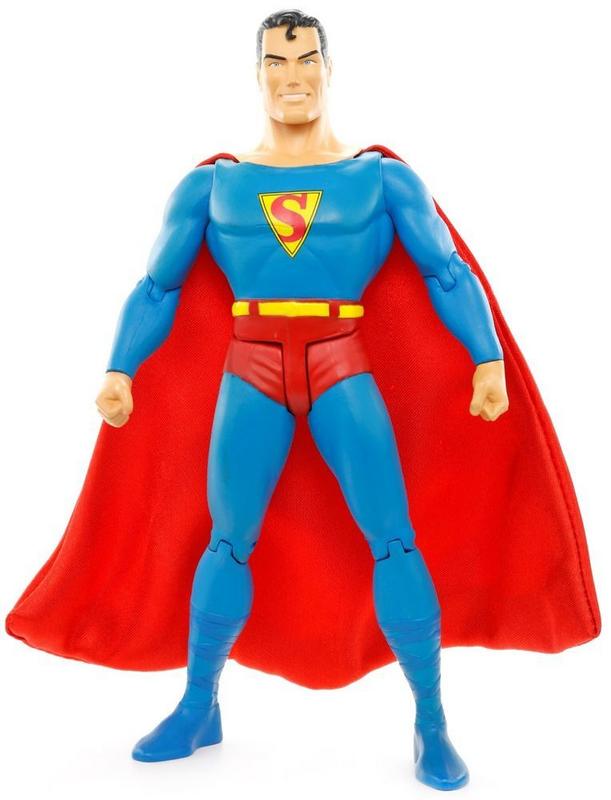 Mattel - DC Superheroes Superman
This is pick is from @Vroom, who has encyclopedic knowledge of Mattel and Kenner figures. From series 2 of their DC Superheroes line, this is considered by many the go to figure for a standard Superman. It’s been repainted and re-released in many different forms. Though not a personal favorite, I had to list it due to its universal appeal and massive success. Also, must respect the Vroom when it comes to these matters! 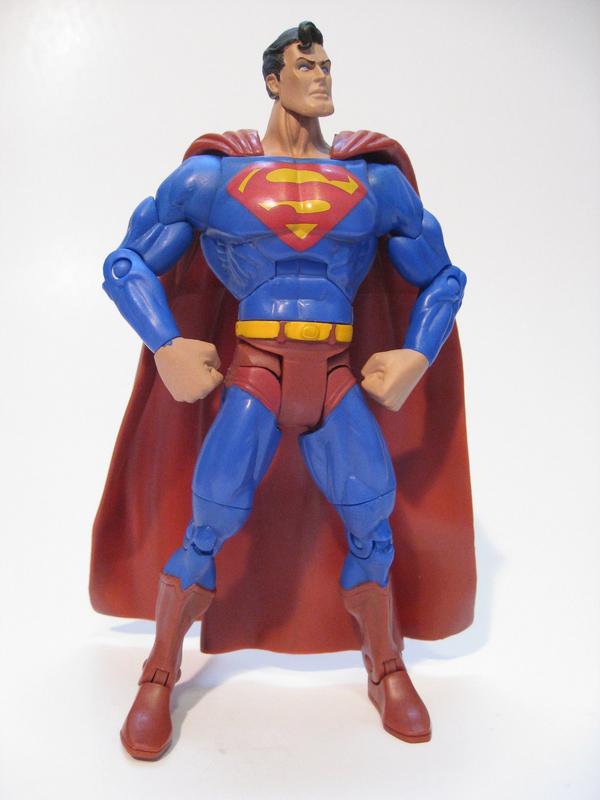 . This is @DCComicsCrisis’ choice for the list. Is it a doll or an action figure? We will never know! As with some of the previous entries, this was the Superman toy for a generation. Pictured here is a 1974 vintage piece, that I believe is worth a pretty penny if you happen to have one in pristine condition. These are making a big comeback nowadays. Many variations in this same style are still being made today by both Mego and Figures Toy Company. Thanks @DCCC! 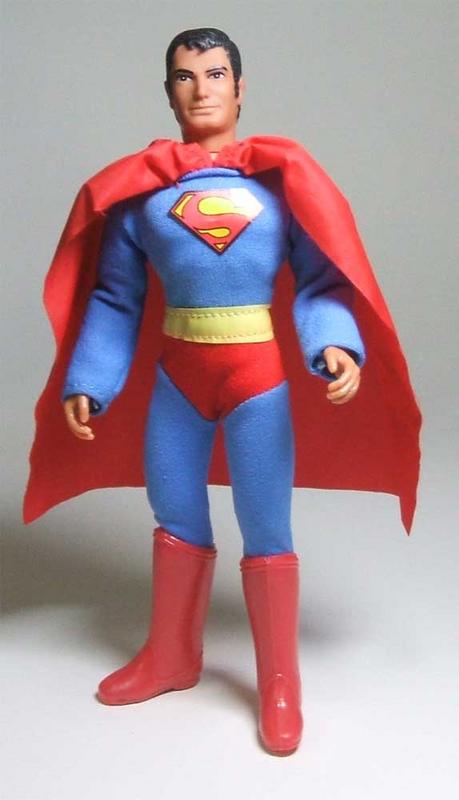 Sideshow - Superman Sixth Scale Figure
Another big one here, 12" in height. Similar to the Hot Toys Reeve Superman, but more of a comic book design. Top notch quality. Comes with 2 alternate heads and some alternate hands. You can actually display this Superman smiling and giving a thumbs up

. I like to display him with the no nonsense look, holding Metallo’s head in his hand. Looks great in any collection. 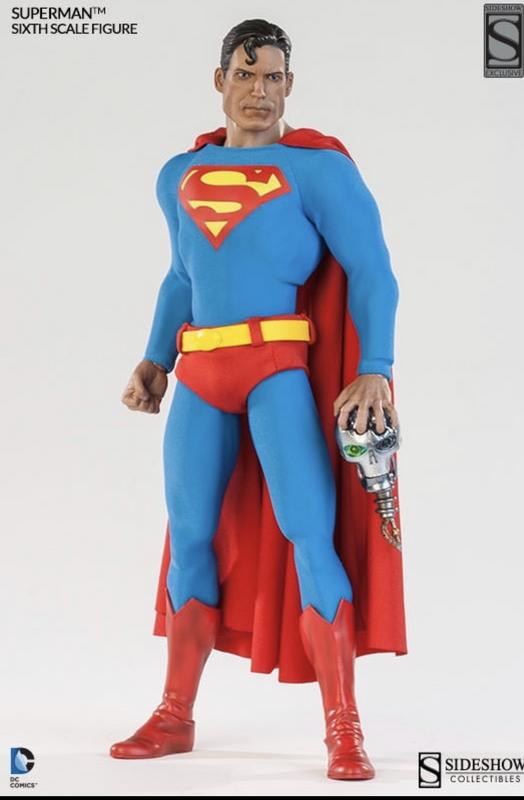 DC Collectible - Designer Series Lee Bermejo Superman
This such a unique sculpt. I think Bermejo is a brilliant artist, and this figure captures his art in a very striking fashion. The wrinkles on the suit, the shading effects, the sculpted S. Just a beautiful figure. Works both as a classic and stylized Superman figure at the same time. Limited articulation, so your miles may vary, but I think it looks great in any collection. 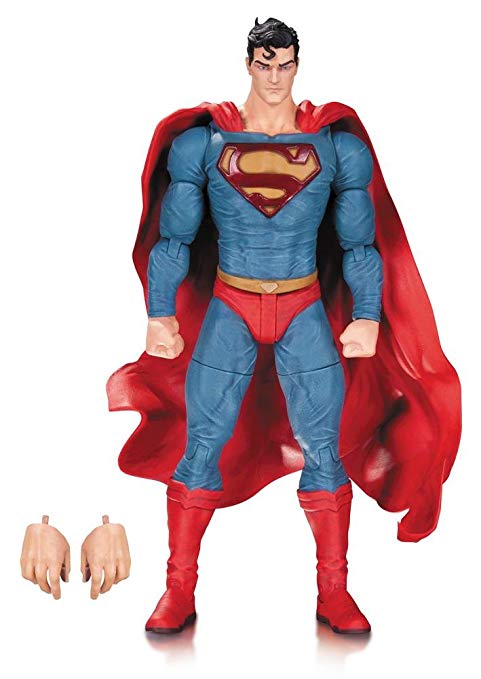 Alright folks, that’s all I got. I hope you enjoy reading about these as much I enjoyed writing about them. If as a result of reading these little descriptions, you find your next Superman figure, or action figure line, I’ll consider it a huge win. Please sound off and share your favorites as well

DC Direct’s Superman Series One (2003) is my favorite Superman figure of all time.

My main man moro just brought down some thunder with that list! I saw some that I want and some I’ve had… and want again

. This list will make one helluva guide for those looking to take up Superman ACTION FIGURE collecting (They’re NEVER dolls, @moro).

Great list and fun idea! If I might submit a couple, I’d say NECA’s Reeves Superman, and their comic-style Superman vs Muhammad Ali Superman. Same body, different heads! I never got the Ali version, but I still love looking at photos of it. 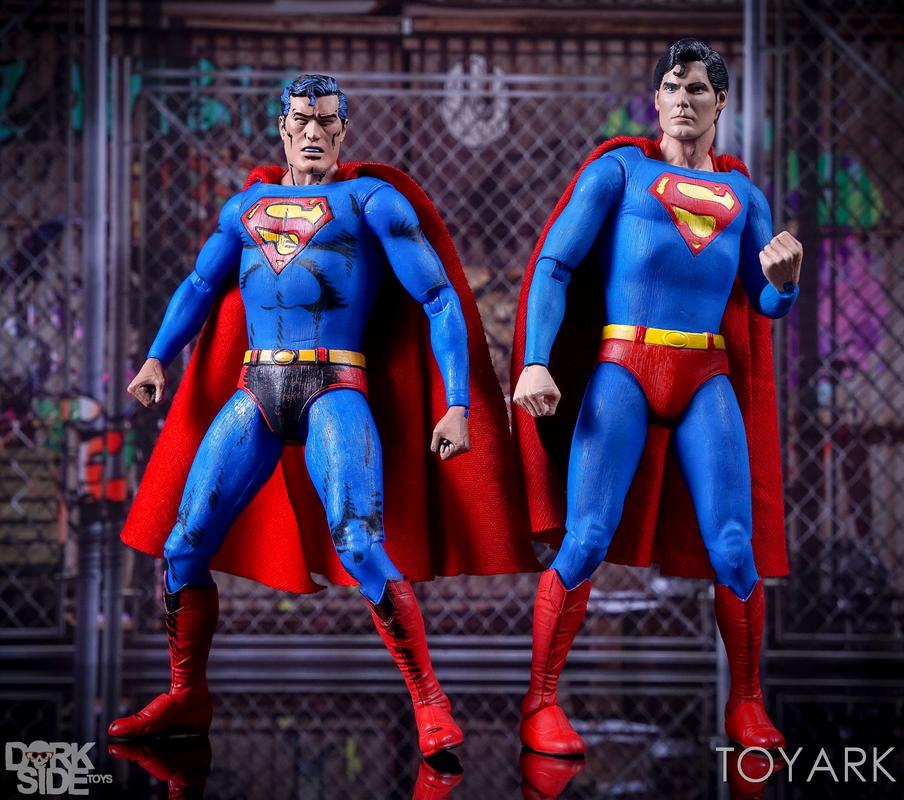 @moro Great list and thank you for the shout-out. The Mattel DC Super Heroes Superman is as close as we have to a mass market released John Byrne style Superman. I think that figure still holds up very well.

@biff_pow The Neca Reeve Superman is a beauty. I’ve never posed him because of Neca’s ridiculous QC track record for breakage, but he’s nice to gawk at.

The Mego one looks like he could have guest-appeared in Thunderbirds Go, and I mean that in a good way!

Voiced by actor Breckin Meyer if I’m not mistaken.

@Super-Squirrel, I have that DC Direct figure you mentioned. Great figure indeed. Almost made my list but was edged out by DC Essentials.
Need an Alex Ross Superman, though. DC Direct made several, including the one you mentioned. 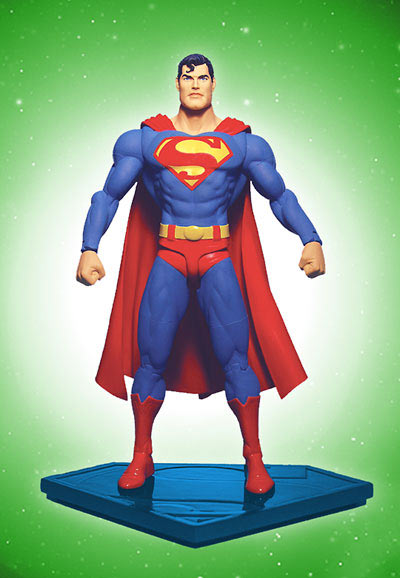