This week we’ll be finishing our deep dive into the more recent YA OGNs (though this won’t be the last time we’ll be looking at these new books) by reading Whistle: A New Gotham City Hero, written by E. Lockhart and drawn by Manuel Preitano. 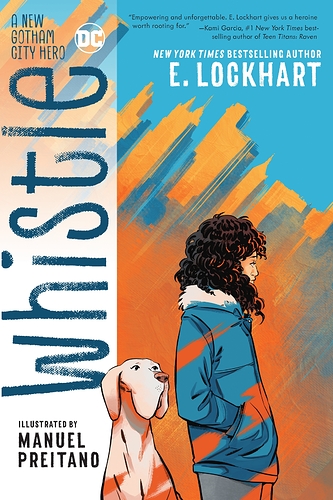 Seventeen-year-old Willow Zimmerman has something to say. When she’s not on the streets advocating for her community, she’s volunteering at the local pet shelter. She seeks to help all those in need, even the stray dog she’s named Lebowitz that follows her around.

But as much as she does for the world around her, she struggles closer to home-taking care of her mother, recently diagnosed with cancer. In desperation, she reconnects with her estranged “uncle” Edward, and he opens the door to an easier life. Through simple jobs, such as hosting his private poker nights with Gotham City’s elites, she is able to keep her family afloat-and afford critical medical treatments for her mother.

Then one night, Willow and Lebowitz collide with the monstrous Killer Croc and get injured, waking up able to understand each other. But when Willow discovers that Edward and his friends are actually some of Gotham’s most corrupt criminals, she must make a choice: remain loyal to the man who kept her family together, or use her new powers to be a voice for her community.

I’m looking forward to discussing this story with you all!

This is cool! I love the colors. It’s a perspective on Gotham I haven’t seen before.
The premise reminds me a little of Runaways, a series I loved back in the '00s, about kids who discover their parents are super-villains. It’s a clever way to complicate the villains, since you see that there are people who depend on them, and that they don’t necessarily consider themselves the bad guys.
I especially like the depictions of Ivy and Croc in this series.
I’m up to part 4 now. Looking forward to seeing where it goes from here.

It’s definitely a different perspective – we rarely get to see Gotham from the viewpoint of the ordinary people who are just trying to survive.

I can see what you mean with the Runaways comparison. It’s funny, when I was reading it, I had a different Marvel comparison come to mind and that was Kitty Pryde. Both are Jewish, both smarter than their peers, both very community-oriented, and they both get tangled up in the affairs of adults who treat her like one more than they probably should.

And yeah, I really liked how they used the villains here, gives off some “Almost Got 'Em” vibes.

I’ve started this one as well. I really really like the art and coloring.

The story concept is refreshing as well, although a tad dark. But welcome to Gotham I guess…

This was a fun read! I like that it’s telling a more modest, personal story amid the setting we know from a lot of END OF THE WORLD scenarios. Willow is an endearing character, especially once she gets her superpowers–I love that she realizes her power is basically “talking to dogs” and she’s so thrilled with it.
I admire that they put so much “real life” stuff in this story without making it a chore. Willow has obligations to her neighbors, family, and friends, and she knows her choices are limited for ways to make money. This could have been preachy, but instead it just feels very warm and personal. Towards the end, there’s a great conversation between Willow and her mother about the morality of telling a lie, and the mom’s line is a lot smarter and more nuanced than I was expecting. The same goes for most of this story.

This is totally a series I would read with my kids. (My 8yo and I have caught every Superhero Girls graphic novel–ask me anything

) DC has consistently impressed me with their offerings for grade-school and YA readers, the last few years.

Definitely – it’s interesting how I think most of the Jewish representation in DC is centered around Gotham. Besides Whistle, there’s of course Kate Kane and the whole Kane side of the family, as well as Harley Quinn.

I’m just going to echo what the others have already said: this is great, Willow is adorable and is a great character, and the art really pops.

This felt like a really fresh take on Nygma and Ivy. Certainly different to see the Riddler show a soft side to an old friend.

Maybe it’s just me, but Willow’s hair drew my eye in almost every panel. Something about the way the artist drew it, maybe

Definitely – it’s interesting how I think most of the Jewish representation in DC is centered around Gotham. Besides Whistle, there’s of course Kate Kane and the whole Kane side of the family, as well as Harley Quinn.

If I could, I would make Superman Jewish, as well as Spider-Man. Batman, not as much of a priority.

Just read Whistle and it was EVERYTHING. New favorite superhero next to Wonder Woman.

Now I want to see Whistle show up in more stuff. More comics, maybe some video game appearances, and of course a live-action adaptation someday!

@MiscellaneousSoup I would totally make Superman more Jewish if I could. Batman and Hal Jordan are already half-Jewish and I’d make that more prominent to their characters if I could too!

Awesome, glad you liked it!

If you’re looking for more appearances, she actually did show up in the pages of Teen Titans Academy, along with Primer, another character that debuted in DC’s YA OGNs. 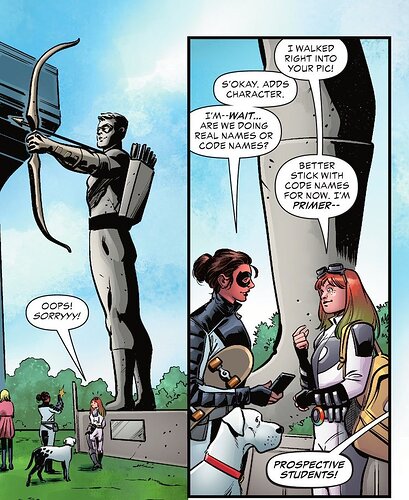