[World of Bats] The Button & The Proposal

This week we’re going to continue our look at the Tom King run of Batman at a very pivotal moment! 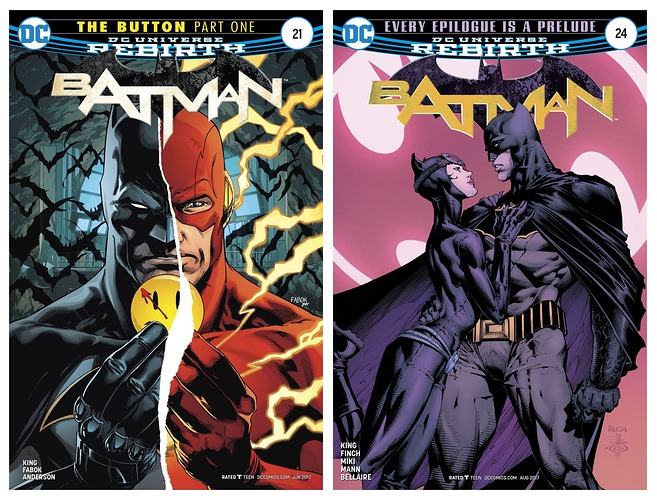 First we’ll be reading the crossover between Batman and The Flash, issues #21-22, “The Button,” written by King with Joshua Williamson, and art by Jason Fabok and Howard Porter.

Batman & The Flash must work together to battle Reverse Flash & discover the origin of the strange button that points to a secret adversary!

Then we’ll be covering Batman #24, written by King with art by Clay Mann and David Finch.

“Aftermath”! Gotham City is at peace…but a war is coming. Armed with the terrifying knowledge gained from the mysterious button, Batman prepares for the coming storm by making a proposition to one of his enemies—one that will change everything for the Dark Knight and his allies!

Looking forward to hearing and sharing with your thoughts on these issues!

“The Button” isn’t my favorite story of this run. It’s more of that Flashpoint/Rebirth nonsense that I don’t care about in the least. (Am I just stubbornly anti-event?)

And it’s about time that Batman proposed to Catwoman. No more of that “Doesn’t this stalagmite kinda look like you?” nonsense, Bruce.

I liked The Button. It has some good action and a compelling mystery to drive the story forward. Barry and Bruce have a good dynamic and I appreciate that they are kindred spirits of a sort. The main thing that holds this crossover back is that it very much feels like the middle of a story (which I suppose it is).

Batman 24 was a good wrap up for Gotham Girl’s story. I enjoyed the artwork.