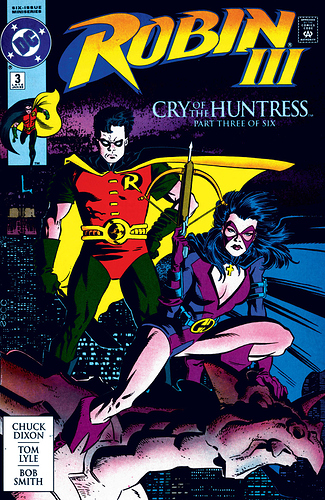 Welcome back to the World of Bats, the Batman Book Club! This week is sadly the last month of the 80 Years of Robin event, and our deep dive into the early days of the third Robin, Tim Drake. This week we are going to dive into the third and last of the Robin mini-series before the launch of his ongoing title, Robin III: Cry of the Huntress!

Robin faces dangerous repercussions and confronts death-defying challenges when he uncovers a plot that he soon realizes is bigger than a mere criminal power struggle! Drawn into the mystery is the Huntress, crossing swords with the Boy Wonder for the first time as she re-establishes her presence in the DC Universe.

Link to the six-issue mini-series can be found HERE!

No discussion questions this time, just let us know what thoughts you have before, during and after you readthe story.

If you want to join the World of Bats and get that cool flair, clicky-click HERE!

And if you have any questions or want to show off your impressive bird calls, you can contact me, @Jay_Kay, @BatJamags, or @AquamonC137.

And with this, my “Tim Drake Club” side-project is complete. You can finally brag to your friends and relations that you’re an expert on “that Robin who got choked by AzBats.”

Really cool to see how you added these great lists to further get into the character.

Sorry, should’ve warned you that I had to travel yesterday. Thanks for being so much better about getting these things posted than I am.

It’s all good. Just be safe in your travels.

I just read this recently in the Characters club while we were focusing on Huntress. I would rank it merely “okay.” Not bad by any means, but not a series I would just keep going back to again and again.

I appreciate how the text conveys a sense of foreboding for the upcoming Knightfall event. I’m less appreciative of its comic-relief depiction of KGBeast (who will be popping up in my club next month for about ten nights or so) or its return to the King Snake well. Does anyone actually like King Snake? I’m sure someone does…

I also read this for the Characters of DC club last month, and this one was just…okay. Nice to see the intro to one of Tim’s reoccuring love interests, and having to try to explain the bruises he’s collecting was interesting, but man are the villains of this dull.

Also, it’s so weird to me that Huntress is hyped up in this and she really doesn’t do much of anything other than crack wise, drink soda, and have Robin save her (which really, really shouldn’t be happening, IMO).

she really doesn’t do much of anything other than crack wise, drink soda, and have Robin save her (which really, really shouldn’t be happening, IMO).

Which part? The soda drinking?

That stuff has a ton of calories. Terrible for a vigilante diet.

The rescuing. Like, I get they debuted around the same time and he’s Robin, but she has way more years of experience on him and she is totally jobbed for him.

Well, it’s not like they don’t burn off a lot of calories swinging off rooftops and stuff.

But, @BatJamags is right. Soda drinking is the worst. I bet it was diet, too.

I think I might be more judgmental of it if this were Huntress III: Cry of the Robin, but eh. I’ll reread and see how much sense the circumstances make. I don’t recall being bothered by it when I read this the first time, but I might not have been paying much attention.

Nice to see the intro to one of Tim’s reoccuring love interests, and having to try to explain the bruises he’s collecting was interesting,

OK, this was sort of cool, but it set up some of what I think made Robin by far the weakest of Dixon’s batbooks (and I’m saying this as by and large a huge fan of Dixon’s work - his Nightwing, Birds of Prey, and Detective Comics runs are some of my all-time favorites; Hey, if you like Frank Miller and Knox likes Mike Barr, I can like Chuck Dixon).

First, the romantic drama was very haphazard. Ariana gets kind of unceremoniously dropped for Steph (when Tim had been written as very much not interested up to that point) at a certain point, and Steph’s own development is a mixed bag, sometimes more interesting than Tim’s and sometimes downright uncomfortable.

Second, the secret identity drama is extremely repetitive. Something happens that puts the double life at risk, and Tim has to make a sacrifice to salvage it. And that works fine here. But when you hit like the third or fourth time that happens, you never actually worry that his identity will be compromised, and instead just watch the inevitable downward spiral that is his life. It stops creating tension and starts just fostering depression.

For the villains, I’ve never found KGBeast very interesting, but Dixon’s quasi-comedic take was at least passingly amusing here and in the Nightwing No Man’s Land tie-ins. King Snake isn’t my favorite either, but I’ve always found him reasonably adequate for the stories he was in. There’s a pretty cool story late in Dixon’s Robin run where King Snake takes over Kobra, which was probably the only time I thought he was really interesting and the first and last time I ever thought Kobra was interesting at all.

I get they debuted around the same time and he’s Robin, but she has way more years of experience on him and she is totally jobbed for him.

That’s the opposite of how you’re supposed to complain on the internet! You should be outraged that Huntress saves Tim from the gang! Total Mary Sue!

I had never read this story before. I enjoyed it. It wasn’t earth shattering or anything, but, it was an entertaining read. I enjoyed the 2 characters trying to figure it out without involving Batman. I also enjoyed the dynamic between Tim and Helena. It was almost like a big sister , little brother type of relationship. I’d recommend to anyone who wants a Bat family story that doesn’t require copious amounts of thinking. Overall it was enjoyable for me

Speaking of which, I was just reading over your How to Stop Writing Batman Wrong thread, and I thought, “Wow. Your list of suggestions sounds just like Barr’s run.”

It also sounds nothing like Morrison’s run, but I love Morrison, too. And in Dixon’s defense, I do love Vengeance of Bane, which he wrote around the same time as Robin III.