[World of Bats] Return of KNIGHTFALL!

Welcome to the World of Bats, the Batman Book Club!

There won’t be an immediate theme for this month of November. Instead, we’re going to catch up on some runs and events that we’ve been reading through in the past! So we’re going to start with one of the longest delayed and one of the most influential Batman events, Knightfall! 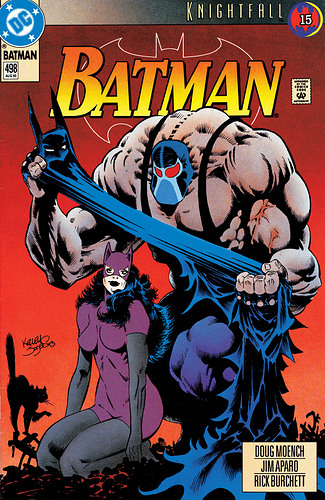 Here are the issues that we’ll be reading:

Let us know what you think of these issues down below!

I haven’t read much featuring him, but I generally like Jean Paul’s appearances. What happened to him? It seems like he doesn’t show up in more recent comics

He was in the recent Justice League Odyssey and also has a current story in Batman Urban Legends. Jean Paul also made a few appearances in Batman: The Adventures Continue.

That’s good to know. Sounds like he’s been around and I’ve just been missing him

He is one of the characters that kind of come and go. Before JLO I feel like he was pretty much MIA. I could be wrong though.

Jean Paul was also in James Tynion’s Detective Comics run from almost the beginning, though he only became part of the team after Tim Drake “died.” Funnily enough we’ll be talking about that run and some of his most important beats there pretty soon…

This is a fun story and I thought Scarecrow was quite menacing as the main villain. Anarky was interesting, I think I’m more familiar with him from Arrow than from comics. If not for the fact that they mentioned it a couple of times, I could have forgotten that it wasn’t Bruce wearing the cowl

I somehow missed this thread altogether.

The Two-Face story has always felt a little clumsy to me, as if the writers realized that they’d forgotten one of their main villains and had to slap together something to make up for their oversight. Even Klaus Janson’s art isn’t doing it for me. (I think his rough, erratic style worked much better for Gothic.)

Batman #498 is essentially a transition issue with nothing of interest going on in it. But, you know, a filler issue is sometimes necessary for pacing purposes, and the issue offers plenty of Jim Aparo’s hilariously awkward framing, which I’m all for. (Who said that you had to go back to Adam West for your Dutch angle fix?)

Shadow of the Bat gives us one of the best Scarecrow stories to ever grace a Batman comic, as far as I’m concerned. And while the Showcase art felt distracting and inappropriate, the artwork here by Bret Blevins is stunning and completely in-line with the content. Oh, and Anarky is here, too, but who cares?

I, Think Knightfall Would Make an Excellent Animated Movie!
I, Still Have Nightmares About Batman Being Attacked By Bane at Wayne Manor!
I, Read the Story Line In the 1990’s!
Great and Interesting Story!

Also, I Enjoyed How the Bronze Tiger and Lady Shiva Helped Batman Get Back In Shape After the Events of Knightfall!

I have been wanting to participate in the World of Bats book club for a long time, so I am way behind but as I looked through the list of titles that have already been discussed, I wanted to add my 2cents.

I honestly lost a ton of respect for Bane. Prior to reading this I though Bane broke the Bat in a straight up fight, only to find out he softened him up first. Batman’s health was down to 10% and Bane came in fresh at 100% that was a weak move.

The remainder of the story Knights Quests and Knights End were good. It showed such growth by all characters involved. From Tim Drakes Robin, Jean-Paul’s Azreal/Batman, Dick Graysons Nightwing/Batman and Bruce Wayne.

If anyone wants to get more in-depth about this title, I’d love to hear from you and hear your thoughts