Hello and welcome to the World of Bats, the Batman (and more) Book Club!

For the rest of this month we’ll be doing something a little different – a team-up with the Justice League Book Club as we cover the big universe-changing event Flashpoint! Here at the World of Bats, we’ll be covering the main event, issues #1-5, written by Geoff Johns and drawn by Andy Kubert, while JLBC will be handling all the tie-ins! 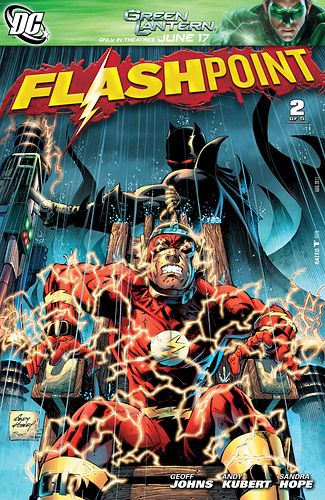 Not a dream, not an imaginary story, not an elseworld. This is Flash Fact: When Barry Allen wakes at his desk, he discovers the world has changed. Family is alive, loved ones are strangers, and close friends are different, gone or worse. It’s a world on the brink of a cataclysmic war—but where are Earth’s Greatest Heroes to stop it? It’s a place where America’s last hope is Cyborg, who hopes to gather the forces of The Outsider, The Secret 7, Shazam!, Citizen Cold and other new and familiar-yetaltered faces! It’s a world that could be running out of time, if The Flash can’t find the villain who altered the time line!

Looking forward to discussing this story with you guys!

And if you’re looking for more Bat-related books to read, check out these fine threads!

First, like I said, this is a crossover with the Justice League Book Club as they’ll handle many of the tie-ins for the story. I’ll post a link to it when it’s up!

Outside of that, check these out!

[photostudio_1624159560996] Hello everyone at the ole RR and welcome to August’s Damian Wayne session. We have left the N52 behind and before us lays Rebirth but in between the two was an inicative called DCYou. Robin: Son of Batman continues Damain’s story with a look into another part of the character’s past as a member of the League of Assassins with the Year of Blood. Let’s follow Damian on this look into his childhood and what he does in order to find atonement for the actions he took bac…

Over at Harley’s Crew, they have two seperate threads going – one for the first issue of the comic book sequel to the Harley Quinn animated series, “The Eat BANG! Kill Tour”! They have another thread for some of the characters in Suicide Squad, including the DCUI exclusive King Shark #1, the Harley Quinn Road Trip Special, and more!

It’s time for a road trip, everybody! Our ladies are back!

…and if you remember where we last saw these two, you’ll fasten your seatbelts, and remember to keep your arms and legs inside the vehicle!

[image] HQAS: The Eat. Bang! Kill. Tour 1 Following the Gotham wedding disaster of the decade, Harley and Ivy end up on the run from Commissioner Gordon and the GCPD!

Hey everybody! Got another mixed bag for this month to close out the summer!

Also, if you haven’t checked it out already, our

HQAS: The Eat. Bang! Kill. Tour #1 discussion can be found …

Over at Characters of DC, for the entirety of August they’ll be covering the character of David Zavimbe, the first Batwing!

[photostudio_1624160942747] Hello again and welcome to C of DC’s August session. September marks the ten year anniversary of the N52 so this session is serving as a bit of a prelude to a N52 Anniversary collaboration some of our clubs are having then. One of my favorite N52 titles was Batwing, who was the Batman of Africa. I was drawn to it because although it was a “Bat Book” it was not like any Bat title I had ever read before and if you don’t already know it, I am drawn to the unusual and …

If I left anything out, please feel free to let me know and give a shout out.

Hello there Jay_Kay and the rest of the World of Bats Book Club Tally-Ho.

One of my favorite events in the DC Universe!

Definitely will look forward to discussing it with everyone.

I hadn’t planned on reading all 5 issues in less than a day, but once I read part 2 I just had to keep going. Starting off, I was pretty sure I had read this before, but once I dug into it there was a lot I didn’t remember. Most of what I remembered was from the movie, actually.

I like the Thomas Wayne Batman (not as a regular Batman, but he’s good for a change up) he’s got a bit of a Clint Eastwood vibe that’s a good match for this world.

Bruce and Barry make a really good pairing and I think they should team up more in their solo series and not just with the League. They are kindred spirits of a sort. The last scene in the Batcave had me feeling pretty emotional with Barry talking about his mom in Bruce reading the letter from his dad.

That sort of thing seems to work on me most of the time, though

Wow, this is my first time reading Flashpoint. It is hard to believe that just saving one person’s life could change things so dramatically. That last scene with Bruce reading the letter from his dad made me very emotional as well.

Well hello there again everyone.

Got caught up in running from different timelines, but all looks well now.

So here is what I thought about while reading through the story again.

Well this was fun looking back at the story again.

I guess you can also see why it’s one of my favorite stories.