This week, to continue our celebration of the 30th anniversary of the debut of Harley Quinn, we’ll be looking at her very first on-going series all the way back in the year 2000, written by Karl Kesel and drawn by Terry Dodson. 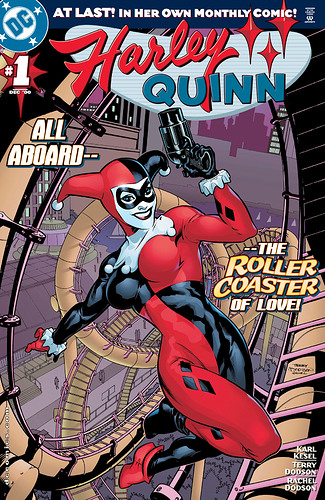 Meet the clown princess of crime! When psychologist Harleen Quinzel met the Joker, the last thing she expected was to find love - but as the Joker preyed upon her mind, she fell for him, becoming the crazy sidekick Harley Quinn! Now join in on the action as Harley breaks her ‘pudd’n’ out of jail; forms a gruesome twosome with Two-Face; arranges an all-bad-girl slumber party; hires some henchmen; reveals her secret origin; and arranges a heist - on stately Wayne Manor!

I read through issues 1-7, finishing issue 7 last night. I forgot how much I enjoyed this first volume of this series. This was a reread for me. There is just such a light-heartedness to these issues that I do not find in most comics of the present era. These issues were funny, especially some of the running gags that were in the first several issues. I also love that they started her off with The Joker, but moved away from that quickly. I also liked that they allowed some of the characters introduced in that first issue to make it into later issues of the series..

One of my favorite things about this series is the artwork. The Dodsons’ artwork is so masterful. I could look at it all day long. I wish they did more interiors than they currently do, then again they are so good because it takes them awhile to make such great artwork. I appreciate them though on this book. It kept me engaged in the story, as each character was distinct and distinguishable from each other. They are able to draw multiple characters and not have you confused on who is who.

Every single issue was just so completely senseless. My favorite issue would be issue 6 because of it taking place in Wayne Manor. This made it interesting to see what would happen and felt like it upped the stakes a bit in the overall series. Then when we get The Riddler thrown in, I threw all my chips in and said YES THIS IS WHAT COMIC SHOULD BE! It was escapism at its best. It was entertainment! Thank you, @Jay_Kay for posting this, so that I reread these. It helped me to reconnect a bit more with my love of comics. I appreciate it and you!

I am in the middle of reading this, hoping to finish it tomorrow. I have to say that I love the name of this as it is a play on The Sandman: Preludes and Nocturnes. As @CassTheStreet has mentioned, this is a light-hearted read and that adds something to the overall vibe to this book. Sometimes it is nice to take a break from the darker comics and huge events that I have been reading.

As has already been said, this is a really fun selection and it doesn’t take itself too seriously. The writing feels very confident; or to put it another way, the comic knows what it wants to be and doesn’t try to be anything else.

There are a couple of things I didn’t especially care for, but they’re pretty minor things. One was the explanation that Ivy gave Harley some strange brew that gives her enhanced strength, agility, and stamina; I just didn’t feel that we needed that bit of exposition. The other was that her crew of henchmen would stick with her so long despite not getting paid.

Overall it looks great and is a light read

I think the reason, if I remembering correctly that they mentioned the Posion Ivy thing is because it happened in a comic that wasn’t Harley’s own title. So they wanted you, as a reader of her title, to at least know she had the boost happen. I appreciated that it was just a mere mention and not an entire flashback or something which could have happened in a title like this.

I think the henchmen for the most part are having fun and just feel like Harley is better than the other choices, except for the one that kept mentioning it. I think they are counting their blessings because Harley isn’t likely to shoot them, hit them, or be mean to them for the most part. Just my opinion obviously. Loved hearing your perspective on these.

I have finished reading all of the books for this selection! A few takeaways, I liked how the seed for Harley and Ivy were planted in issue 1 and again in the issue where Harley was having a party. Not sure if this was intentional, but it was there.

Also, Buster, Joker’s henchman and later Harley’s henchman looks a lot like Kevin in the current Harley comics minus the tattoo. Not sure if this was intentional but my head cannon is telling me Buster is Kevin, just now Kevin uses his real name.

Thank you, @Jay_Kay for posting this, so that I reread these. It helped me to reconnect a bit more with my love of comics. I appreciate it and you!

Wow, that is so kind of you to say, so glad I could play a little role in that!

Also, since you mention about the Dodsons, I’m not sure if you are aware, but if anyone here wants to have some more Dodson work in their life, they are actually doing an Image book with Matt Fraction called Adventureman. I haven’t read all of it, but from what I understand it has the fun premise of what if a single mom stumbles onto the position of taking on the legacy of a Doc Savage like pulp hero. 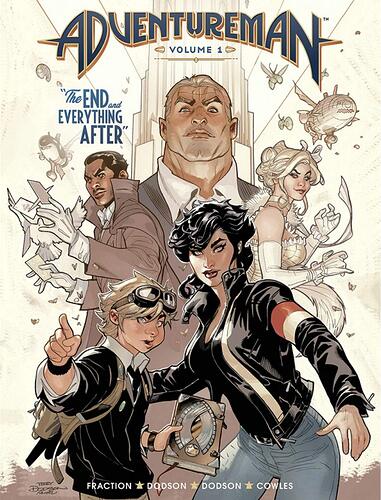 I have to say that I love the name of this as it is a play on The Sandman: Preludes and Nocturnes.

…I was today years old when I realized that.

I think the reason, if I remembering correctly that they mentioned the Posion Ivy thing is because it happened in a comic that wasn’t Harley’s own title.

I could be wrong, but I think it came from the Batman: Harley Quinn one-shot that introduced Harley into the main DCU.

Thank you all for sharing your thoughts!

Must find and read! I love their art that much.

I think you are correct about the Harley one-shot being where the Ivy thing occurred, but it wasn’t in the ongoing which is why I think they included it as a mention.

I am reading off and on Sandman and never made the connection about the name of the first arc! I appreciate @D4RK5TARZ for mentioning this as well. This is exactly why I love this community.