So…who has two thumbs and forgot this month is the three year anniversary of this club? This guy!

So with that in mind, this week we’ll take a look at a recent anniversary issue, the Gotham City Villains Anniversary Special #1, written and drawn by a smorgasbord of creators including Wes Graig, G. Willow Wilson, Stephanie Phillips, Dan Mora and…checks notes…Danny DeVito?! 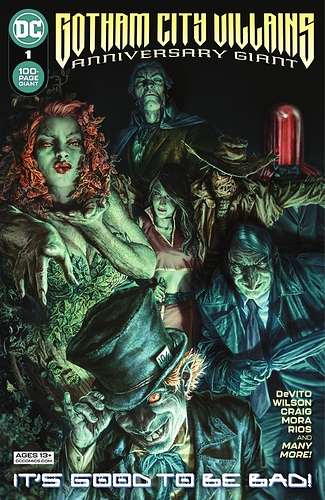 Gotham City may be protected by the Dark Knight, but this major metropolitan destination is also plagued by some of the deadliest, most nefarious villains in the DC Universe! In this oversize anniversary giant, DC Comics proudly presents tales of Batman’s deadliest foes written and drawn by some of the biggest, most exciting names in comics! 2021 marks an anniversary year for the Scarecrow, Poison Ivy, Ra’s al Ghul, Talia al Ghul, the Mad Hatter, Killer Moth, and the original Red Hood, and Gotham City Villains Anniversary Giant #1 brings these baddies to life in some big ways! Also featuring the anniversary celebration of the Penguin, written by none other than the man who brought Oswald Cobblepot to life in Batman Returns, star of the silver screen Danny DeVito!

Gotham City may be protected by the Dark Knight, but this major metropolitan destination is also plagued by some of the deadliest, most nefarious villains in...

Looking forward to hearing your thoughts on this story.

And I really love his story, too. It has that Golden Age sensibility of heroes (in this case, villains-turned-antiheroes) solving a major real-world problem with one bold and drastic feat, and it allows DeVito to give his fine feathered fiend the sort of happy ending that he wasn’t allowed to share with Michelle Pfeiffer 30 years ago.

Do Heroes ever arise out of villain hood. Why not Court of The Owls like Lincoln March or another. Why dont they find out the secret that makes them so loyal? Lincoln March is Batmans bro so why don’t they help Batman without the sidekicks.This a great ideway to discover a another secret thru other villains.

The Penguin and Catwoman story is definitely the stand out for me. It’s fun and self-contained. I get it, DC has comic books to sell, but I did get a little frustrated that so many of these stories were kind of just teasers for new storylines.

The Red Hood and Killer Moth stories were fun, too

Occasionally they’ll take villains and make them antiheros, I would suggest that they have gone this route with Harley Quinn (it’s certainly gotten much harder to argue that she’s a pure villain).

There was also that relatively recent arc in Detective Comics the club covered where Clayface was a hero. I think it was Tynion IV?