We’re continuing our look at the misadventures of Harley Quinn to celebrate her 30th anniversary, but this week we’ll be upping the ante and adding gal pals Poison Ivy and Catwoman to the mix! That’s right, this week we’ll be looking at Gotham City Sirens #1-7, written by Paul Dini and Scott Lobdell, and drawn by Guillem March. 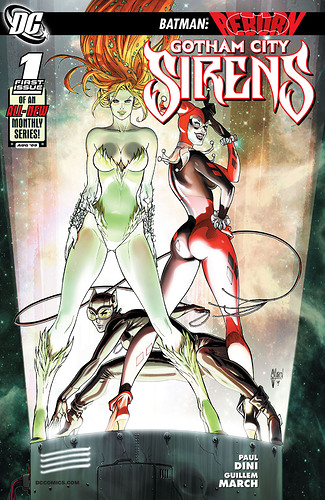 Hang out with the bad girls of Gotham City! Catwoman, Poison Ivy and Harley Quinn are tired of playing by other people’s rules—regardless of which side of the law they’re on. These tough ladies have a new agenda all their own, and they’ll use any means necessary to pursue it. But can they get along and work as a team? And who will get hurt along the way?

As if DCUI somehow knew I was going to be doing these issues this month, they’ve covered them all in a nice, handy-dandy Storyline link which you can find here!

Looking forward to talking about these fabulous issues with you all.

And if you’re looking for more Batman, Harley, and Bat-Family themed reading, check out the threads by these fine groups!

Renegade Robins is continuing their treks through the histories of Damian Wayne and Stephanie Brown. Check out Damian’s further adventures with the Teen Titans, and Stephanie becoming the new Robin, where absolutely nothing bad will happen after that.

[Steph Robin] The Renegade Robins Club may have seemed at little off-brand over the last year with these Spoiler adventures, but your patience is finally rewarded: Tim steps down, and Stephanie Brown dons the Bird Suit! Let’s hope it lasts! Join the club today! Here’s our schedule: 2022-09-16T05:00:00Z (UTC) → 2022-09-30T05:00:00Z (UTC) Click the drop-down boxes below!

[photostudio_1662180437140] Hi folks and welcome to another session of the Damian Wayne branch of the @RenegadeRobinsClub. This month we are returning to Damain’s Teen Titans team to see what adventures await them. This time the team faces a choice about whether Kid Flash should be reinstated onto the team and Damian shows that even he can admit when he needs to improve. Let’s get started! As always of you’d like to join RENEGADE ROBINS just smash the link. [Polish_20220902_233249456] ISSU…

Hey there, everybody! It’s September 2022, and this month marks the 30th Anniversary of the mighty and mischievous hurricane known as Harley Quinn! [image]

Who would’ve thought that a once tiny character meant as a cameo on an animated series would become such an important part of not just the DC landscape, but the fabric of modern culture? Our lady, Harls has come an incredibly long way from her modest beginnings—so! You, dear reader, are cordially invited to join …

The Obscurity of DC group is also teaming up with Harley’s Crew to take a look at Harley Sinn as she takes on Harley Quinn and Her Gang of Harleys!

Hello @ObscurityofDCClub and @Harleys-Crew AND everyone else in our community! Welcome to the first ever Obscurity of DC/Harley’s Crew crossover! [My project-1] For this week, we’ll be focusing on none other than… HARLEY SINN!!! Age Suggestion: 12+ Number of Issues: 6 What to read: Harley Quinn and Her Gang of Harleys! Character description: Constance Brand, AKA Harley Sinn, is an enemy of Harley Quinn. She is very obsessive and will do anything to destroy Harley Quinn and her gang. Now…

And finally, the Official DC Book Club is celebrating Batman Day by looking at Tom King’s City of Bane!

Bane’s minions have taken control of Gotham City and are ruling with an iron fist, and Batman is nowhere to be found…will the city fall to crime and violence? [DC Book Club_CityOfBane_Social_1920x1080_] In celebration of Batman Day 2022, we’re kicking off the newest edition of the Official DC Book Club with Batman: City of Bane 1 and Batman: Secret Files! Join us on September 19 through the end of the month for a thrilling faceoff between some of Gotham’s most iconic (and deadly) characters…

I remember that I liked the first half of this series more than the second half, but they’re a fun trio. Even if they can’t work together for long. I’d like to see them together more.

I also remember having no idea who Zatanna was when I first read it, and it lead to some other books that I enjoyed.

This was pretty good, but I don’t think I like it as much as the Harley Quinn comics we covered last time.

The holiday issue was probably my favorite, even though I’m not sure what’s going on with Dick and Selina. It made it appear as though they were an item, which I think would be strange considering her relationship with Bruce.

The Gagsworth storyline was pretty fun, too.