Hell(o) and welcome to the World of Bats, the Batman Book Club! This week we’re continuing our trek through the spooky and at times supernatural side of Gotham by taking a detour through the cemetery with a special guest star in the first six-issue arc of Gotham By Midnight, written by Ray Fawkes, and with art by Ben Templesmith, Juan Jose Ryp, and Juan Ferreyra! 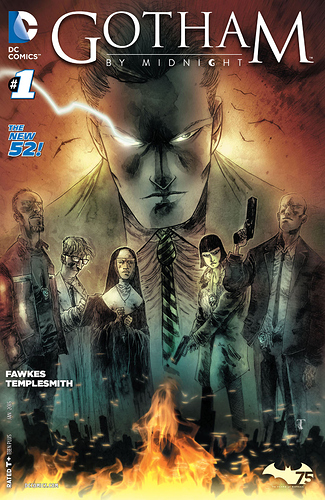 Spinning out of Batman Eternal, Detective Jim Corrigan aka The Spectre stars in his very own series Gotham By Midnight!

Normally Batman and the other caped protectors of Gotham have the streets of the city covered. But when monsters, ghosts and other supernatural beings enter the mix, even the Dark Knight needs help. Enter Detective Jim Corrigan aka the Spectre to prowl the streets of Gotham, solving the unsolvable supernatural crimes the city can muster.

Here are the links to this arc:

Let us know what you think down below! What did you think of this part of Gotham? What interested you if anything about the new characters in this series? Anything you want to confess before The Spectre arrives.

I’m late getting started on the reading this week. Just wanted to say after reading the first issue that this selection is off to an excellent start. The art might not work well for ordinary stories, but, so far, it is absolutely perfect for this series. It immediately creates an eerie tone.

No worries, thanks for checking it out!

Yeah, Templesmith is pretty far from the beaten path of Big Two superhero books. If you like this style and want to read more of his work, I’d recommend checking out the series 30 Days of Night, which is the basis for the movie from a few years back.

It was a fun read. I like the idea that Gotham has some dark history behind its founding; it definitely provides some fertile ground for creepy stories.

It’s nice to see the Spectre around, too. That’s a character I don’t know much about.

I do have a question about issue 5. The way I read it was that the Spectre was going to destroy Gotham and the only reason that didn’t happen was because Sister Justine sacrificed herself to save the city. I’m a little unclear on why the giant black spirit just sort of left after that.

It was a fun read. I like the idea that Gotham has some dark history behind its founding; it definitely provides some fertile ground for creepy stories.

I agree, Gotham is sort of like the ultimate Haunted House in some ways – even if nothing supernatural is there, the history of it can really create that mood.

I’m a little unclear on why the giant black spirit just sort of left after that.

I’m a little unsure about that too. Maybe the spirit had other plans? It might be something that’s detailed in the second arc; which, I don’t know about you, but I’m definitely going to read.

I think I’ll keep reading. This series kind of reminds me of the Dresden Files with supernatural stuff going on in a modern city