This week we’ll be heading back to school and taking a look at Gotham Academy #7-12, written by Becky Cloonan and Branden Fletcher, with art by Karl Kershl and Mingjue Helen Chen! 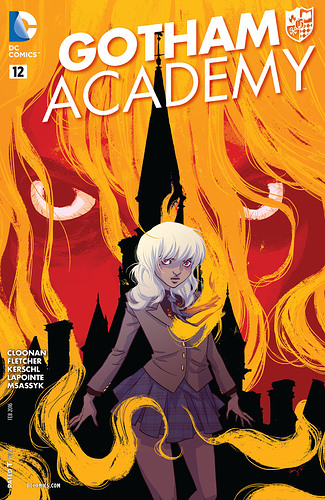 At the beginning of the term, Olive Silverlock returned to Gotham Academy a shadow of her former self. But thanks to her new friendships and their Detective Club sleuthing, Olive was finally starting to feel whole again.

Then, abruptly, Olive’s mother died—or, she seemed to. In the weeks after the funeral, Olive begins seeing her mother around the school. An Arkham Asylum patient with a deadly dark side, Sybil Silverlock was a powerful and complicated woman. Could her spirit be reaching out from beyond the grave? And if so, is it motherly Sybil who haunts Olive—or her deadly alter ego Calamity?

Plus, the kids hunt a werewolf on campus and Maps teams up with the Academy’s newest transfer, Damian Wayne!

Here are the issues and yes, this will be on the test.

Looking forward to discussing these issues with you guys!

I have never read this series before. It was fun to read. I knew Hugo Strange was up to no good, of course. Seeing Kirk Langstrom as a teacher is interesting, although I wonder about his involvement in the “boybat” problem. Clayface’s daughter is great, and I liked Damian’s and Tim’s appearances.

The whole series is really delightful, though in my reread of everything except the Yearbook a few weeks ago, I could really tell when Fletcher took over scripting duties, and Cloonan stopped being as involved in the dialogue. It was still very good, but there was a touch lost.

I have never read this series before.

Glad you liked it! I think that’s one of the more fun things about book clubs like this, to get people to try things that they might not have been prompted to otherwise.

though in my reread of everything except the Yearbook a few weeks ago,

I noticed you mention that before, may I ask why you skipped Yearbook? I actually haven’t read any further ahead than this – well, technically the Robin War tie-in, which we won’t be covering since we already did with Renegade Robins a while back – and I was planning on doing that arc sometime in May-ish, around the time when most school semesters end.

Yearbook is fun enough, but I wanted to see how the whole story read in a row, and Yearbook disrupts the story pretty seriously. It has no real connection to any of the ongoing plot points, and is, in fact, mostly flashbacks or one-offs that don’t matter when they happen.

I think it would be a good idea to do Yearbook in May, for sure! It just didn’t fit my reread plan, which was purely plot focused.

This was a fun read. I think for me Damien’s appearance was the highlight. There was something about his dynamic with Maps that appealed to me and I liked that it was left open ended whether it was magic that bound their hands together or if it was in their heads.

Is Hugo Strange ever up to anything good?

Damian and Maps’s relationship is a true delight. I wish they’d do more of that. Perhaps in the current Batman backups!

Offhand, I can’t think of a time!

I’d love to see that – I think it would be a different dynamic since Damian’s been through way more stuff lately and he also seems to be into someone new in Respawn, but I certainly wouldn’t say no to it.

Er, do you mean Flatline?

…Yes. Respawn is the Deathstroke sidekick that’s probably Grant. Crap, don’t know how the hell I mixed those names up.

Just checking if I’d missed something big in the series