For the month of September, to commemorate the ten year anniversary of the New 52 relaunch, we’re going to be examining some of the titles that launched the September of 2011.

First we’ll start with the first arc of Detective Comics, issues 1-7, written and drawn by Tony S. Daniel, with a back-up story in issue 5 drawn by Szymon Kudranski. 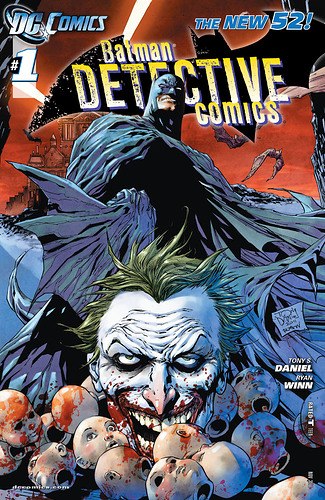 As a part of the acclaimed DC Comics—The New 52 event of September 2011, Detective Comics is relaunched for the first time ever with an all-new number #1! Bruce Wayne returns as Batman, and sets his sights on new villain the Gotham Ripper, who in turn has his sights on Batman. Meanwhile, Bruce Wayne explores a budding romance with television journalist Charlotte Rivers, who’s visiting Gotham City to cover the gruesome slayings–while also trying to uncover Bruce’s own mystery. But time is running out as both Commissioner Gordon and Batman work to uncover the true identity of this new serial killer.

Links for the issues can be found here:

And you can also share your thoughts today! Looking forward to discussing these issues with you guys.

If you’re looking for more Bat-readings, check these out!

[image] Howdy y’all and welcome to another installment from the World of Bats. These next 2 weeks we’ll join Batman as he takes a crack at his first unsolved case. "They see you at your hearth and they see you in your bed speak not a whispered word about them or they’ll send the Talon for your head." The Court of Owls! This was Snyder’s first story arc for the New 52 Batman run. There are mixed feelings about the New 52 overall but most will agree that Snyder’s run was probably the best …

[image] Howdy y’all, for the the rest of the month we’ll be concluding Batmans epic conflict with Gothams oldest secret organization: The Court of Owls in Batman Night of the Owls. Batman throws a party at Wayne Manor and show’s of a cool new suit. Then we’ll take a look at how the rest of the batfamily is getting along with these friendly folks and check in with a kitty cat and Dr. who suffers from a server cold. Here’s a link to the story Night of the Owls & Batman #11

Hello and welcome to another installment of the World of Bats, the Batman Book Club! First off, to everyone who celebrates, Happy (early) Easter! For this week…look, I’m going to be honest, there isn’t a LOT of Easter-related Batman material, so I had to improvise. So, while the kids tonight are going to be waiting for the Easter Bunny to come, we’ll be chasing the White Rabbit in Batman: The Dark Knight #1-7, co-plotted by Paul Jenkins and David Finch, with Jenkins doing the scripts and, of c…

Meanwhile, if you’re looking for something outside the New 52, check out these readings from the rest of the Bat Club Family!

First over at Renegade Robins, they’re continuing their look at the Jiro Kuwata Batmanga! Also, Damian Wayne kidnaps leads the Teen Titans in the Rebirth era!

And over at the Birds of Prey Club, they’re spotlighting Black Canary by continuing their look at the most recent Black Canary ongoing, as well as team-ups with Batman and Wonder Woman!

Hey everyone! It’s time for another Spotlight on one of our very favorite metahumans,

If there are any I miss, please let me know!

If memory serves, 'Tec was my favorite Batbook during the launch of The New 52. Month in, month out, I couldn’t get enough of Daniel’s run.

I’m also a huge fan of his run on the Pre-New 52 volume of Batman.

Every time I read that, his New 52 Detective run and well, practically all of his other DC stuff (especially his three-issue run on the New 52 Action Comics of #'s 19-21), I become a bigger and bigger fan of his.

From what I remember, I think in terms of favorites at the start of the New 52, I was tied between Batman and Batman & Robin, but this had it’s fun moments. I’m not as big on Daniel as a writer, but he is a great artist, really liking him right now on Nocterna over at Image.

I started on Batman and Robin in trade (then switched to singles with #9) and really dug it, too. Patrick Gleason’s art was “gold, Jerry! Gold!”

As a big David Finch fan, Batman: The Dark Knight was also good (especially his rendition of White Rabbit

). Once he left, the series got to be a “buying it out of habit” read for me. I was glad when it ended, because it felt like it had run out of steam about a year or two earlier.

I’ll have to check over it again, but I remember this one falling between the other Batman comics of the time. It didn’t anger me as much as Court of Owls, and it didn’t offer as many unintentional laughs as Dark Knight. It was just kinda dull.

Update: I did kinda enjoy the story from issues 6-7.

I can see that – I think Tony Daniel was more sure of what he wanted to do with the first arc and it has this crazy Grindhouse vibe that’s kind of fun.

I think it was issue 6 that had one of THE most unintentionally funny panels I’ve read in a long time. 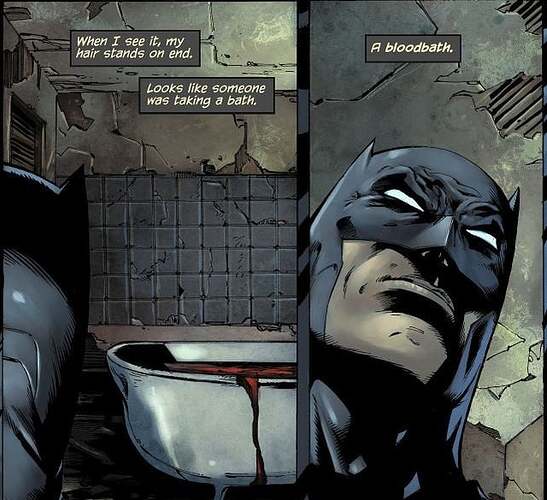 This arc was a pretty solid start to the New 52 Detective Comics reboot. Charlotte Rivers (and her evil twin) were fairly interesting new characters; though it feels like DC relies a bit too heavily on the plucky female reporter archetype (I guess every hero wants his/her own Lois Lane). Dollmaker was quite creepy, though the fact that he got the drop on Batman twice strains my disbelief. The twist with Penguin at the end legitimately caught me off guard.

This version of the Batsuit looks pretty good. It needs longer bat ears.