This week is sadly the last installment of our deep dive into the character of Cassandra Cain, this week returning to James Tynion IV’s run of Detective Comics #950-956, “League of Shadows,” with art by Eddy Barrows, Christian Duce, and Marcio Takara. 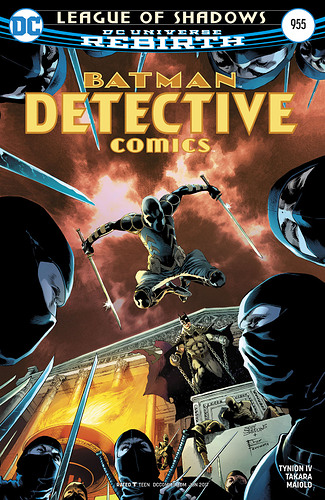 Batwoman, an accomplished crime-fighter who’s overcome the darkest of betrayals. Clayface, a reformed villain whose potential is eclipsed only by his astonishing powers. New heroes like Azrael, an avenging angel, and Batwing, whose incredible armor makes him a true dark knight. Led by the Batman himself, this team of guardians stands ready to protect Gotham City.

But the secrets of the team’s most mysterious member, Cassandra Cain, are about to come to light. And that light will cast a shadow darker than anything they’ve ever seen before.

They thought the League of Shadows was just a rumor—a secret society of nihilistic killers often whispered about but never seen. But now the League is here, in Gotham. They’re destroying Batman’s team one by one. And their sinister leader, Lady Shiva, has come to reclaim her daughter—or destroy her.

Can even Batman’s arch-enemy Ra’s al Ghul and his League of Assassins stop the onslaught? Or have the Shadows come to stay?

Here are the links for this week’s reading:

And that’s to all of you as well! Looking forward to hearing your thoughts about this different yet similar take on Cassandra.

And if you’re looking for more things to read:

First, I want to shout out a new project I started this week. With it being the 15th Anniversary of the release of the weekly series 52, I decided to start a 52 Book Club, where every week we go through one issue of the acclaimed series, so join us!

[image] Your eyes do not deceive you! It’s a new (temporary) club! This year of 2021 has a lot of anniversaries and special occasions, many of which will be celebrated by the other book clubs throughout the rest of the year. One such anniversary is the release of the series 52, a weekly maxi-series that started on this day, May 10th back in 2006. So to celebrate its 15th anniversary, this Book Club will starting every Monday, read through 1 issue of this book every week until its conclusion! …

Also, the World of Bats is still doing a Casefile on the classic Batman arc “Hush.”

Hello again and welcome to the World of Bats, the Batman Book Club! Here we are again with another Casefile! This is a special edition where we detail a story that is way too long to cover for a standard week-long entry of our book club, that lasts for the entire month. And this month, with it being Asian Heritage Month and, well, because it’s been a big hole in our coverage of all things Bat, we’re going to cover Batman #608-619, also known as “Hush,” written by Jeph Loeb and drawn by Jim Lee…

Renegade Robins is continuing its look at the aftermath of Damian Wayne’s death, and the last arc of Jason Todd’s ongoing title.

[photostudio_1615947817979] Hello again members of the Damian Wayne branch of the @RenegadeRobinsClub and welcome to the second session of the Robin Rises Event. This months session will deal with the aftermath of the events shown in Batman, Inc volume 2. How does Batman (and by extension the rest of the Bat Family) deal with the loss of one of their own? What is going through Batman’s mind as he attempts to restore his son back to life? To what lengths will be go in order to see that become …

[RHO 50] The Renegade Robins Club has reached the end of an era. We began in 1983 with Jason Todd’s first appearance, and we have now caught up with the most recent issue on the site–and the final issue of Scott Lobdell’s run on the character. Thank you for joining us in looking over this character’s literary history! Discuss these issues in the comments below! Join the club today! Here’s our schedule: 2021-05-04T05:00:00Z (UTC) → 2021-05-31T05:00:00Z (UTC)

Harley’s Crew is going back to Harley Quinn’s first ongoing solo title by going into issues #20-29!

Hey there, everybody! Remember how in the last issue there was a horrible splosion that left our lady for dead?!

Well, grab your baseball bats and buckle up, because it’s about to get even more complicated! [image] Harley Quinn 20-29 Harls now finds herself in a mysterious new place—there’s a demon or two, some disembodiment, magic, and quite the bounty on her head.

(Aka: just an average week…and possibly the greatest jail break of all time!) You know the drill…

And the Birds of Prey Club is continuing its month long look at other Batgirls, including Cassandra Cain.

Hey everybody! Its origin-time again, only this time around, in honor of AAPI month (and because we

all our cowl-wearing ladies), we’ll be diving in to a mixed bag o’ girl-bat related books!

First up, Cassandra Cain: (Come by this Cass themed #mixtape-monday HERE if you have a song you’d like to add to her playlist!

And if I left out anything else, please let me know!

Every time I read this series, I’m reminded of how much I prefer these characters in a team book rather than a solo series. I wish that this idea had been employed after No Man’s Land. In other words, this is what Batman: Gotham Knights should’ve been.

I especially love seeing Cassandra learning the concept of art through dancing.

This is, I think, an underrated arc. Partly, perhaps, because of how it seems to be setup for other arcs (which I would probably argue happened in Batman and the Outsiders, though I think Tynion still would like to do some of it himself).

It’s a fun arc. The idea of Cassandra enjoying dance becomes she learned body language as a first language feels perfectly in character.

I didn’t care for the fact that Batman didn’t know about the existence of the League of Shadows early on, but they did explain that.

It’s a fun arc. The idea of Cassandra enjoying dance becomes she learned body language as a first language feels perfectly in character.

That was definitely a neat addition – a body language that doesn’t involve harming anyone, but instead to express yourself. Kind of surprising no one had thought of it before (at least I don’t think they had – I haven’t read all of Cass’ Batgirl solo).

Yeah, there’s been a bit of a habit of Batman not knowing of any secret societies lately, hasn’t there? At least they give a decent explanation – and a way to evoke/use Identity Crisis stuff without actually assassinating the character of Zatanna! Yay!