Hello everyone and welcome to the World of Bats, the Batman Book Club! This week we’re touching back on the James Tynion run of Detective Comics as we go through issues #943-949, “The Victim Syndicate” and the back-door pilot to the Batwoman comics series “Batwoman Begins.” It’s written by James Tynion IV and co-written by Marguerite Bennett during the Batwoman issues, with (takes breath) Alvaro Martinez, Eddy Barrows, Carmen Carnero, Al Barrionuevo, and Ben Oliver. Whew. 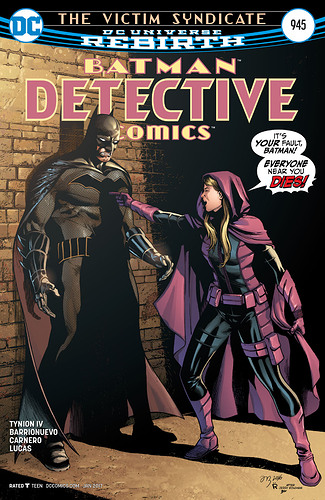 Innocent victims maimed or broken by Batman’s greatest enemies band together, and they blame Batman and his fellow vigilantes for what happened to them just as much as they blame the psychopaths who hurt them. Batman and his newly trained team of allies must take on these troubled souls, but one of Batman’s teammates can’t help but think they might have a point…

Here are the handy links to what we’re covering this week:

And looking forward to hearing your thoughts on these issues!

I don’t think that anyone can accuse the Victim Syndicate storyline of being subtle. Eventually, the First Victim gets on my nerves so much that I kinda wish that Superman had thrown a building on the person in Man of Steel.

It was a good read, but I think it covers some well trodden territory. It seems the question of whether Batman is helping or hurting Gotham is often on writer’s minds.
I’m not entirely sure how the Victim Syndicate thought unmasking Batman would help. Joker, Ivy, Scarecrow, and etc already exist at this point and GCPD seems quite unable to handle that sort of thing without help.

I didn’t realize Batwoman was that pale outside of her suit; I’m not sure why, but I thought she powdered her face as part of the outfit

I don’t think that anyone can accuse the Victim Syndicate storyline of being subtle.

Yeah, I think it’s fair to say that outside of Mudface the Victim Syndicate were kind of “eh” characters. There to have some physical obstacles and to establish the underlying question of this arc (and in a lot of ways the rest of the run).

It was a good read, but I think it covers some well trodden territory. It seems the question of whether Batman is helping or hurting Gotham is often on writer’s minds.

Definitely, though I think what helps make this story a little different is involving the whole family in it. Often in these stories, Batman is brooding over this question by himself, maybe having someone like Alfred or Gordon talk with him. Here I think it’s more focused on the Bat Family, how they react and how their own biases and traumas impact their views. Harper has a different view from Stephanie, because one idolizes Batman even if she is trying to live a more normal life, and the other had the position sort of thrust on her and she’s going through tremendous loss.

I’m not entirely sure how the Victim Syndicate thought unmasking Batman would help. Joker, Ivy, Scarecrow, and etc already exist at this point and GCPD seems quite unable to handle that sort of thing without help.

Yeah, it’s one of those things that’s sort of addressed in some arcs (“The Gift” in Tom King’s run comes to mind), but not always in arcs like this. The “Kings of Fear” mini we covered back in October kind of does both, though.

I didn’t realize Batwoman was that pale outside of her suit; I’m not sure why, but I thought she powdered her face as part of the outfit

Nope, she’s just that committed to the goth aesthetic, I guess.

Thank you both for sharing your thoughts!

I definitely think that the Victim Syndicate is similar to the villains in Terminus, the Batman and Robin arc by Tomasi - but they’re a bit more interesting to me, since they were dragged into this life against their will, whereas the Terminus villains were generally people who’d chosen to join the fight against Batman and received disproportionate consequences.

I am a bit bummed that Steph didn’t really get a focus until the last two issues of the arc, though I did find the parallels between the scene where she faces off against Batman and the ending of Detective Comics 940, where Batman embraces her, particularly heart-wrenching and beautifully done. Unlike a lot of readers, I thought Steph’s motivations were very plausible and really empathized with her, even though I also think that she’s wrong and a bit hypocritical. I do wish that Tynion hadn’t decided to make her the “stop having fun” voice in the story, but I think if you read it sympathetically, she’s still a very cool character.

The art, sadly, is very varied - but it’s all generally good stuff. Really love the covers, particularly the one where Steph faces Batman in an homage to Suicide Squad, where Amanda does the same.

I was also thinking of the Terminus characters, since I had recently read that arc for Renegade Robins – I think the Victim Syndicate work better because we actually get a chance to see them have some personality other than being just weird looking thugs for Bruce and Damian to punch.

I’m with you on Steph. I know when this was coming out I saw a lot of people throwing crap at her for siding against Batman and while I disagreed with her, I couldn’t fault her for feeling that way, especially after the loss of Tim.

It’s funny, I didn’t really think about how many different artists there were for this series in general until I had to type it down for the post. Man! I guess that’s the cost of double shipping books twice a week – you get more story for your buck, but consistency in terms of art can get hit or miss. I’m kind of glad that the big two are sort of back to just monthly titles now.

Agree on the personality - especially for Mudface, of course, though that would come later.

Glad other readers didn’t hate Steph for being wrong! I think it’s good for characters we like to make mistakes.

Double shipping is so rough on art teams - I like the quicker story pace it gives us, but I hate the art inconsistency. Also really glad that DC is back to monthly (though I’m worried about June’s solicits - seem to be pushing back up for twice monthly, which doesn’t work at all, especially with the increased prices).

Oh, and if you’re looking for some more Bat team-ups, maybe with a bit of extra…power to them, @Bar-El is doing a neat Book Club/WAL for the first arc of Superman/Batman!

The Victim Syndicate is the first time I have read Rebirth Era Detective Comics. Aside from being sort of lost regarding the overall story of Tim Drake, I rather enjoyed this. The team thing is interesting and works really well in the world of Batman. Adding Clayface to the team oddly makes sense, in an X-Men kinda way.

I do have a question about the Victim Syndicate, are these all characters that were previously in Batman comics? I could imagine some of them being one-off characters from the 1940s or something like that and then given new life here. If that is the case, I love this idea and have often wondered what a comic would be like with one-off characters in bigger roles.

I guess there is no way to not talk about Spoiler. In order to do that, I should applaud Tynion for adding a mental health side story without seeming out of place. Spoiler, while acting out, I think she needed to act out. If only she could turn the next page in the comic to see Tim Drake is alive! I do think this was the first time I have read anything with Batwing in it so I was interested to see how his character meshes with the team of more established characters.

I need to read the Batwoman Begins books but I have a feeling I will be digging those as well.

No, all of the Victim Syndicate are new characters, as far as I can tell. Tynion worked hard to make the fit in the world, but I haven’t found any reference to them myself.

I quite like Steph’s story - it felt plausible and sympathetic, even though she’s clearly not able to see the whole situation right now. I kind of wish there’d been a bit more of her perspective early in the story, but it’s a pretty well balanced story with the whole team. Big, big fan of Luke Fox!

The Victim Syndicate is the first time I have read Rebirth Era Detective Comics. Aside from being sort of lost regarding the overall story of Tim Drake, I rather enjoyed this.

Glad to hear this! If you ever decide to read to read the first arc that explains what happened to Tim, we covered it at the WOB over here!

Hello and welcome to the latest edition of the World of Bats, the Batman Book Club! This week we’re continuing our look at the greater Batman Family by going through a book that heavily features the Batman Family as a team book. We’ll be covering Detective Comics #934-940, “The Rise of the Batmen,” written by James Tynion IV and drawn by Eddy Barrows, Alvaro Martinez, and Al Barrionuevo. [image] This installment will be the current book reading from 2020-12-19T06:00:00Z (UTC) → 2020-12-24T06…

Adding Clayface to the team oddly makes sense, in an X-Men kinda way.

Funny you should say that, because writer James Tynion has said that he was approaching Detective with the idea of “what if a Batman book was written like an X-Men book?”