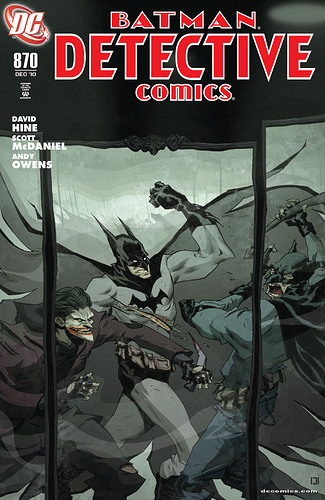 This week we’ll be looking at Detective Comics #867-870, written by David Hine and drawn by Scott McDaniel. Now, you might be asking, “Wait, I thought this month was all about spin off comics of Batman games?” You would be right, because this is a sort of comic book prelude to the multiplayer first person shooter set in the Batman universe, Gotham City Imposters. 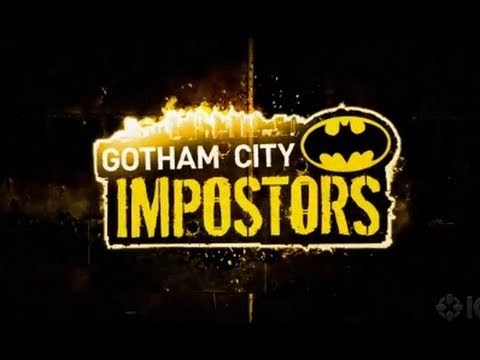 No, that was not in fact an acid dream you vaguely remembered. Anyway!

A call to arms has gone out through Gotham City, and normal, everyday citizens are being drafted into a bizarre battle. Will they side with vigilante justice or join the cause of chaos and anarchy?

Looking forward to discussing this story with you all.

If you’ve never heard of the game before and you’re curious about the life of the game, here’s a good YouTube video about it: And if you’re looking for something more spooky for the October times, remember we still have a Casefile entry going all month on the twelve part maxiseries Batman: Gotham After Midnight

And if you’re looking for more Batman themed reading, check out these other clubs!

First off, the Renegade Robins is covering something more terrifying than any horror-themed books we can cover, and that’s War Games/War Crimes as part of Stephanie Brown’s violent end as Robin.

[Stephanie War Crimes] Hey, fellow Steph Brown enthusiasts! The Renegade Robins Club is . . . is . . . You know what, DC? We’re sick and tired of you killing off all our favorite Robins! You did this to Jason, you did this to Damian, and here you are doing it to poor Stephanie! What’s the matter with you? What do you have against joy and happiness?! Calm down . . . calm down. Okay, so World of Bats has previously covered War Games here. Feel free to talk about that storyline, as well as its d…

The Modern Age Superman Club is also covering some of Damian Wayne’s most recent adventures with Jon Kent.

The Challenges and Battles of the Super Sons

[image] No matter the challenge or battle @ModernAgeSupermanClub, Jon Kent and Damian Wayne will confidently take the challenge and absolutely win the battle, for they are the

! To celebrate the 5th anniversary of the modern iteration of the Super Sons and their forthcoming animated movie debut in Batman and Superman: Battle of the Super Sons on October 18th, strap on your cape and grab your Batarang as you dive into their most-recent comic adventures: Wh…

This is the first time I have heard about this game. Sounds like an interesting premise

Yeah, I remember seeing when it was first announced – it was around the time when console online multiplayer was still not a thing for a lot of people, including myself, not to mention digital only media, so it wasn’t in my reach at the time. I don’t think the premise was shown off much in the game, but the book does do an interesting job setting things up.

The end of this story got surprisingly dark; it’s mostly a relatively light read until we learn what happened to Heath’s girlfriend. Just thinking about it sends a shiver down my spine.

They got me with that story beat; I didn’t see that coming

On the whole, I didn’t especially like the story as most of it felt like a paint by numbers Batman story. It’s entertaining enough but probably wouldn’t stick with me if not for that one part

Oh yeah, what happened to that character is definitely some nightmare fuel.

I will say that while it does feel pretty paint-by-numbers, I was pleasantly surprised about this one since it was basically a set up for a multiplayer shooter game.

One detail that really surprised me was the cops being part of the Bats and especially the detail about them having Batman flairs on their uniforms to tell each other apart and not arrest each other. It kind of reminded me of the turn we’ve seen in recent years of cops co-opting the symbol of The Punisher, and the fact that this book was done several years before that made it oddly precedent.

Perhaps I was a little too harsh yesterday. It is better than I expected and much better than it has to be considering that it’s essentially cross-promotion for a video game that pretty much flopped.

That’s a good point about the bat pins; I totally missed that. It definitely wouldn’t feel out of place in a story written today, but in 2010 that wasn’t really something the general public thought about