This week we’ll be exploring some of the work in the world of Batman by famed comic book creator (Christopher) Priest, by checking on a chunk of his acclaimed run on Deathstroke that heavily features the Dark Knight, Deathstroke #30-35 “Deathstroke Vs. Batman” with art by Carlo Pagulayan. 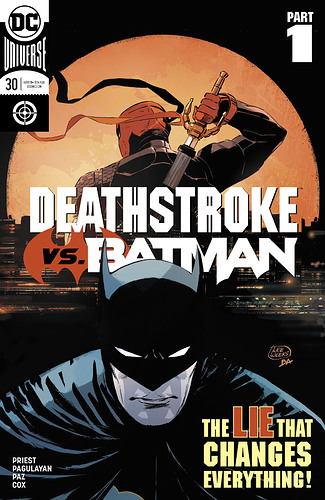 One is the World’s Greatest Detective. The other is the World’s Deadliest Assassin. Batman and Deathstroke are two of the most brilliant and dangerous men alive, but the similarities between these bitter rivals stop there.

A bombshell is about to be dropped on the lives of both Bruce Wayne and Slade Wilson–a revelation that even two people who’ve prepared for everything never saw coming.

A source informs the two masked men that Damian Wayne–a.k.a. the young killer turned crime-fighter called Robin–isn’t the son of Batman at all. His true father: Deathstroke himself. If this information turns out to be true, it will change everything. This shocking intel has set two unstoppable forces on a collision course, as Deathstroke and the Dark Knight wage war for the heart and soul of the Boy Wonder…and the truth.

Blood will be shed. Secret identities will be uncovered. And a grudge match decades in the making will reach its explosive climax…

We’ll also be taking a look at an earlier one-shot written by Priest called “Batman: The HIll,” with art by Shawn Martinbrough. 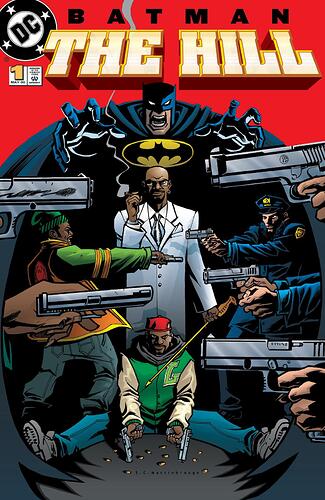 A stylish, extra-length one-shot pits the Dark Knight against a foe who isn’t afraid of him.

The Hill feels very much like the other comics of its time. The post-NML stories all tend to blend together in my head, thanks in large part to the art style.

That said, it has a great ending.

I enjoyed the Deathstroke story more, but I again have to attribute that preference in large part to my preferences in comic book art. Never for a minute was I convinced that the twist set up in this story would actually stick.

Hmm, yeah I can kind of see what you mean with the art. That does feel evocative of the style at the time – which isn’t inherently bad, I think the style fits the moody, dark feel that Gotham should have, but still, I think it was more the story that was special about the one-shot than the art.

But yeah, the twist was an…interesting way to set the two against each other. I did appreciate how Priest really tied things together with past Batman events. It almost could have worked and then they just said “nah, nevermind.” Thus it makes you wonder if they weren’t going to go through with it, why bother putting the idea in our head in the first place?

That said, I imagine Priest wouldn’t have gone through with it, because the last time he tried to change a big thing or part of the identity of another person’s creation it went…really badly.

I imagine Priest wouldn’t have gone through with it, because the last time he tried to change a big thing or part of the identity of another person’s creation it went…really badly.

We don’t talk about that incident. It’s a dark web to untangle.

These were interesting stories. I definitely preferred the Deathstroke one. It does seem a bit unbelievable that Batman wouldn’t just do his own DNA test instead of going through all of that with Slade. Talia will never win Mother of the Year. I have to say that the more I read with Damian in it, the more I like him. The Hill felt a bit dated to me, but it was good to see Batman learning how to inspire fear in the criminals he fights.

Both of these were pretty enjoyable. In the Deathstroke one I thought Batman was acting a bit out of character. Like others have said, if it matters to him he can do his own DNA test. But ultimately it doesn’t matter to him, so it kind of felt like a waste of time and effort for him to antagonize Slade.

The Hill has an interesting premise and I did enjoy the way it ended. Batman going to extraordinary lengths for a bad guy that isn’t afraid of him was pretty cool. It did feel a bit dated, but not too much. It’s always neat to see Batman in disguise