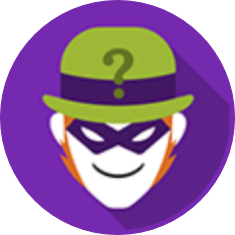 That’s a pretty cool Community Badge right there! Would you like to snag one of these? Well you’re in luck!
Howdy my fellow Bat Family and Fans, welcome to the World of Bats Comic Detectives Scavenger Hunt!

World of Bats Book Club is branching out and trying some new things this year. Along with our weekly book club installments (here’s a link to this weeks Book Club installment Batman: Year Two). We have just started shinning the Bat Signal on what we are calling CASEFILE’s where we take a crack at larger story to read and discuss, that would be too long to do within a single week. This month we are looking at Scott Snyder’s Zero Year CASEFILE 001. We are also going to be hosting Watch-a-Longs with our second installment taking place Friday at 7:00 p.m. PST/10:00 p.m. EST featuring Batman: Mask of the Phantasm
This week we also started a section called Batchat a place to discuss all things Batman ex: comics, movies, figures, and for its first topic we would love to hear your thoughts on Batman #86 Their Dark Designs part 1 by James Tynion IV.

and now to the Scavenger Hunt!

In the World of Bats Book Club this week we are diving into Batman: Year Two with our caped crusaders journey. This story is written by Mike W. Barr and part of his year long run on Detective comics. Barr has done much for our Detective, that lil Son of the Demon, you could say he made him an Outsider . In one of his fan favorite stories with our Dark Knight there’s a pile of bodies that lay cold on a villains path as he makes his way for Gotham’s Commissioner. This villain is not messing around either and Batman considers him an equal, as skilled and obsessed as he is in seeing his mission through. In his realization of this foe’s tenacity he describes him with a quote from an author. Help me Comic Detectives! What is this Villains name, the story he is featured in, and What is the name of the author who Batman quotes?

The villain of this story is: The Wrath. (Batman’s “opposite number”) The story is: Batman Special (1984-) #1, and the author that Batman quotes is: Thomas Huxley.

Well, I think that the official title of the story is actually “The Player on The Other Side”

…Well, that was fast. Was that too fast? I don’t really do these scavenger hunts.

yes was that real easy in your opinion?

No, I don’t feel like it was really easy. I just got REALLY determined about it because I can’t compete in my scavenger hunt that I’m doing I REALLY wanted to win yours lol! I literally sat here and looked for it since I put my kid to bed (so like 3 hours and some change). I am familiar with Mike W. Barr’s work though, so I think that helped. It finally hit me that I thought I remembered a Batman Special with a plot like what you were describing.

Well super congrats!! I will message Applejack and get that to you soon! Thanks so much for playing! (I really want one of these badges as well, gonna give your a shot soon!)

Awesome! Thanks! I know it was quick, but I did really enjoy it. I felt like you did a good job and your clues were very clever! I would love to see you do another one

And I wish you luck with my scavenger hunt as well! The main event doesn’t start until the 20th, but I’m doing 3 bonus questions. Two of which are already posted at the bottom of the main event post, and I’m putting the last bonus question up tonight.

I was going to play but wasn’t sure if I should post message you or post here, Great job @CharlieSheensDealer!

Lol, I think I’m the only one doing the weird “submit your answers via private message” thing.

The main event for my scavenger hunt will work the same way this one did. Whoever posts the answer to each question first will get the point and people can just post those answers as replies in the main thread. With the main event questions, the first person to post the answer gets the point, so it doesn’t matter if other people see their post with the answer in it.

I want everyone to have the chance to get the points for the bonus questions though, not just the first person to answer them. When I was setting up the event and putting in the bonus questions it hit me, "Well, if I want everyone to have the chance to answer the bonus questions, then I can’t let people post the answers to them publicly because then the first person to post the correct answer will be the only person who actually has to do the work and then everyone else will just read their answer and copy it. So, to get around that issue with the bonus questions, I asked that those answers be submitted by private message. I don’t think anyone else is doing anything right now though that needs to be set up that way. I’m the only weirdo in that respect lol.

Out of curiosity, is that my Riddler badge image you used there? Lol. Not that I mind you using it, but I recognize it because mine has the extra little purple ring around it but on the real Riddler badge the shadow of his face goes all the way to the edge of the badge (the shadow stops just before the edge on my badge image because I added an extra “ring” to smooth the edges where my editing program cut the image out of a screenshot).

it sure is! Thank you. It was right there in the thread section and was a few seconds quicker than pulling up Applejacks post with the pic she posted (lazy of me

). Didn’t even realize it had been altered, think I only looked at the original once.

Well, aside from that tiny little spot on the right side where the shadow doesn’t go all the way down to the edge, it is exactly the same as the original. I could’ve fixed it, but I was in a hurry (my image editing software is pretty awesome. I use Affinity Photo and Affinity Design professional editing and digital design software BTW, it’s so amazing!) But that little sliver of purple is how I recognized it though lol. Again, no worries, I’m glad you could use it too since I took the time to make it lol. I think it’s great that we can all rely on each other! I was just curious

I didn’t know there were two different Riddler badge! It’s hard to get one anytime I play HubCityQuestion’s Tuesday trivia, as always it’s still fun to try!

Not as knowledgeable as Hubcity but will try and make them challenging!