[World of Bats] Catwoman: Year Two and When in Rome!

Welcome everyone to another edition of the World of Bats, the Batman Book Club! And this week is the end of the deep-dive focus on Catwoman, in celebration of her 80th Anniversary. These past few weeks of stories have had some pretty big, dark, bleak moments for Selina, much more than I previously anticipated, honestly. So, to make up for it, this week we’re going to have a double dosage of some lighter, more fun fare! 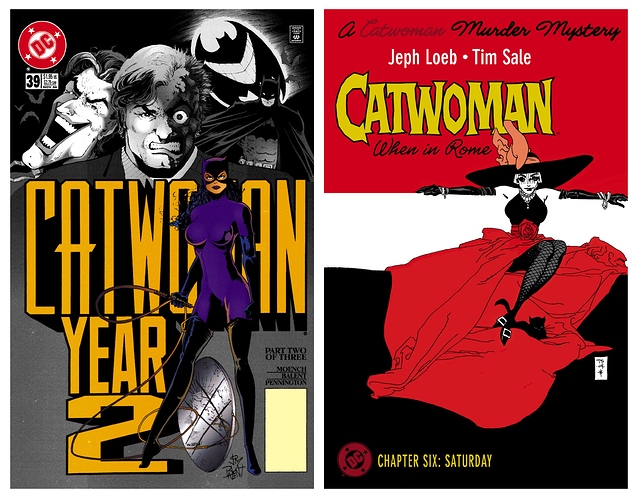 Year Two’ part 1! It’s the untold tale of Catwoman’s first big score: steal the Joker, the Penguin and Two-Face! Plus, the Feline Fatale has an early encounter with Batman.

You can find the first issue of the three-issue arc HERE!

Next, we have Catwoman: When in Rome, the six-issue mini-series by the iconic team of Jeph Loeb and Tim Sale.

Guest-starring Batman and a host of Gotham’s most colorful and dangerous villains! Selina Kyle—also known as the Gotham feline fatale Catwoman—makes a mysterious trip to Italy to deal with the deadly Falcone crime family.

You can find the first issue of the mini-series HERE!

Any other thoughts, observations and questions are open as well!

If you wish to join the club and haven’t already, you can click the link HERE, and if you have any other questions or concerns, you can contact the leads of the group in @Jay_Kay, @BatJamags and @AquamonC137.

‘Till next time, and maybe even a little sooner than you might think…heh heh heh heh…!

Also, apologies for not getting it in earlier today, sudden change in work shifts kinda made me lose track of my days.

After recently reading the 1980s Bat/Cat stuff from Doug Moench, I’m really intrigued by his take on the early years of their dynamic. Also, lots of bathing/showering, but that may be at Balent’s request.

Let me just say that post-Zero Hour continuity is rather confusing. Maggie Kyle seems to have been erased from the timeline at this point. (She will return to the timeline by the end of Volume 2, with nary a Crisis to explain it away.) Catwoman: Year Two follows the continuity of Catwoman #0 and Catwoman: Year One (Annual #2). And then Jeph Loeb swoops in with his Long Halloween continuity, which doesn’t fit with anything else!

Yeah, seeing Moench was the one who wrote Year Two was what drew me in when I was looking for content and part of why I chose it.

And yeah, continuity in general can be rather confusing. Really, the best way to explain it is to put Long Halloween/Dark Victory in it’s own continuity…until books like Two-Face: Year One and Tony Daniel’s Batman run try to add elements back in!

I was actually enjoying When in Rome for most of the issues. For once, Jeph Loeb seemed to be resisting his urge to shove a thousand Batman villains into a single story. Then the ending happened, and I was like, “Yep, there’s the Loeb I know.”

Yeah, I can see that – though I wonder how much of that is Loeb and how much is that Sale loving to draw those kind of things.

Considering how cameo-filled Hush and Public Enemies are, I blame Loeb.