Welcome back to another edition of World of Bats, the Batman Book Club!

We’re continuing our deep dive with the feline fatale Catwoman with “Copycats,” the six-issue arc of the 2018 volume, written and drawn by Joelle Jones, with additional art by Fernando Blanco! 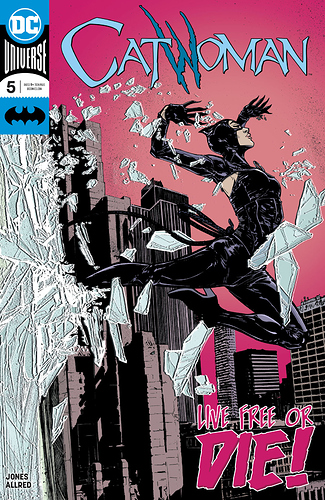 The wedding night’s barely over, but Catwoman’s back on the streets, this time to expose a copycat who’s pulling heists around Gotham City. As Selina cracks the whip on her former criminal cohorts, she’s attracting unwanted attention from one of Gotham’s most dangerous groups. The mob? Nope. Try the GCPD. And as if the Bat-Bride didn’t have enough problems, don’t miss the debut of an all-new villain determined to make trouble for all nine of Selina’s lives. Don’t miss the start of an all-new monthly series written and illustrated by Eisner Award-nominee Joëlle Jones!

Here are the links for these six issues:

Any thoughts or questions are welcome, of course, and here are some discussion questions to help out:

If you haven’t joined the club, you can do so – and get the sweet flair – by joining HERE.

And if you have any questions concerning the club or how to get a good night of sleep, you can contact @Jay_Kay, @BatJamags and @AquamonC137.

Hope you enjoy, and Happy Easter to everyone who celebrates!

The story is decent enough, but the art is the real draw. The new costume evokes the Batman Returns look without being a carbon copy. Oh, and Maggie is here, pretty much in the same state where we left her last week. Do we know yet if she became Sister Zero in this revised continuity?

Oh, and for those who haven’t noticed, we are going to get a Q&A with Joelle Jones here on the community on Tuesday! So get to reading and maybe throw some questions her way!

Live Q&A w/ Joëlle Jones, writer and artist of Catwoman (2018), Tues 4/14 @5pm PT/8pm ET! Starting Tuesday, April 14th at 5pm PT/8pm ET, we’ll be hosting a LIVE Q&A with the inimitable Joëlle Jones, writer and artist across many titles, including DC’s Catwoman (2018), Batman (2016), and the Eisner award winning series Lady Killer (2015). Please try to limit the number of questions asked to 1-2; this way, everyone has a chance to get a response in the limited time we have

The new costume evokes the Batman Returns look without being a carbon copy.

I never thought of that, but I can definitely see it, especially in the corset – which on the onset seems a little impractical, but then she used to pull heists in a purple dress and a green cape. Eighty years of AESTHETIC.

Do we know yet if she became Sister Zero in this revised continuity?

We don’t exactly see that story in the flashbacks, so possibly not. If I’m thinking of the same thing, I don’t remember really caring for that story, so I wouldn’t be too sad if it wasn’t.

How do you think this affects Selina’s state of mind and the events of this tale?

Selina is a loner by nature and even more so with a broken heart. She really, really, really wants to be left alone so she can lick her wounds, so when she gets messed with for no reason it gets her goat even more than it would normally.

What do you think of it and how it compares to previous outfits?

what do you think of Raina Creel and her crime family? Are they a good match against Catwoman?

They’re “okay.” Nothing real special about Creel at this point except for her actual appearance. She could grow into a great villain for Catwoman with time to grow.

What was your favorite moment in these six issues?

The fight with the old folk.

Overall, the art really stood out in these issues more than the story, and I’m really okay with that.

however I would like it better without the armpit holes. That shouldn’t be a thing.

I always hear that, but to be clear, there actually aren’t specifically holes in the armpits, but rather the mask, shoulder and arm parts are a separate garment she puts on over the rest of the outfit. You can see it clearly in the cover for issue #12. 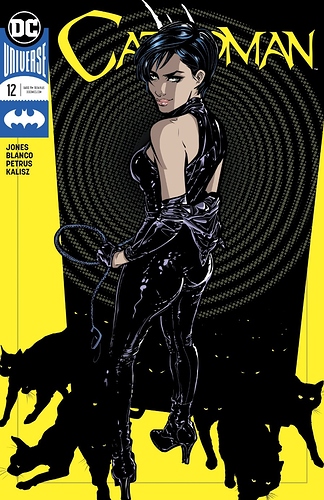 Okay, then, let’s get rid of the jacket.

Hi! New to the community here but I love this series and saw the link in the Jones Q&A forum so I wanted to join.

I’d also like to shout out the brilliant use of Maggie. I think it was very powerful to showcase a story of taking care of a debilitated family member. That’s a very real situation for many people. It’s not easy, and Jones didn’t make it seem easy, but still she showcased the real love.

I also love that she set the story in Villa Hermosa which sort of alluded to Cat’s Latinx heritage. We got a brief glimpse of her mom in #4 and not much else specifically about Cat’s background. Selina is sometimes shown to be Latina even though she is white passing in this series. I think Jones did a smart thing by creating a world with Latin influence to acknowledge her diverse background.

Anyways… lot’s of thoughts! I hope you enjoy this series as much as I do! It’s good to the very end! Hope everyone is healthy and in good spirits!

First off, welcome! Glad you liked these issues and I hope you stick around for the rest of the week and beyond.

I love that Jones explores the messy feelings of being unsure if you made the right choice.

That’s a great way to put it, I definitely think there’s a lot of meaty character moments and thinking outside the page with her in this series, especially if you also consider how it ties in with Tom King’s Batman going on at the same time.

I know this discussion is only about the first 6 but I like that later Jones introduces references to other costumes.

Oh yeah, I haven’t read forward to that point yet (I actually bought the second digital trade because I wanted to read more than what DCU would have provided), but her takes on the classic dress and cape and the Jim Balent purple costume are super cool. For those who haven’t seen it. 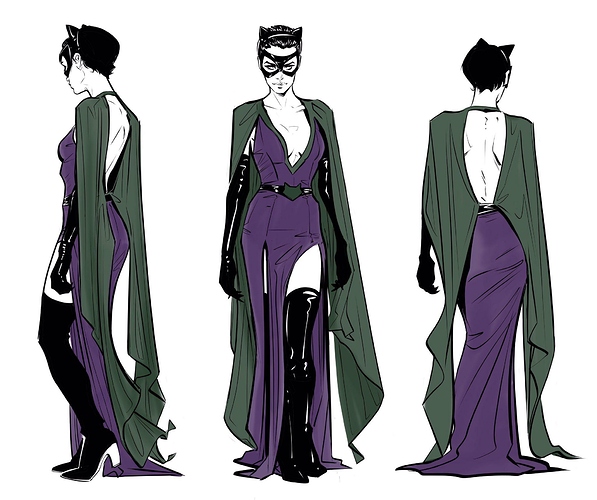 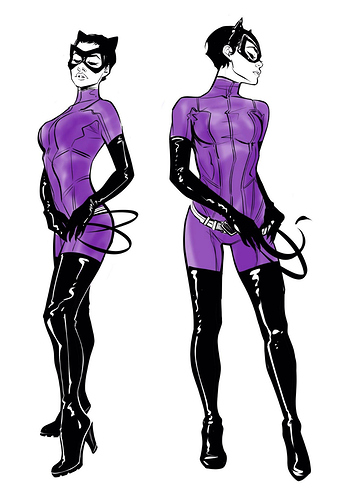 Also, as an aside, I’m digging how much of a Rennaissance the Balent-era purple suit has gotten of late, between this, the costume being used in The War of Jokes & RIddles, and in James Tynion’s run of Batman. Maybe this means the next design she gets might have some purple thrown in there? 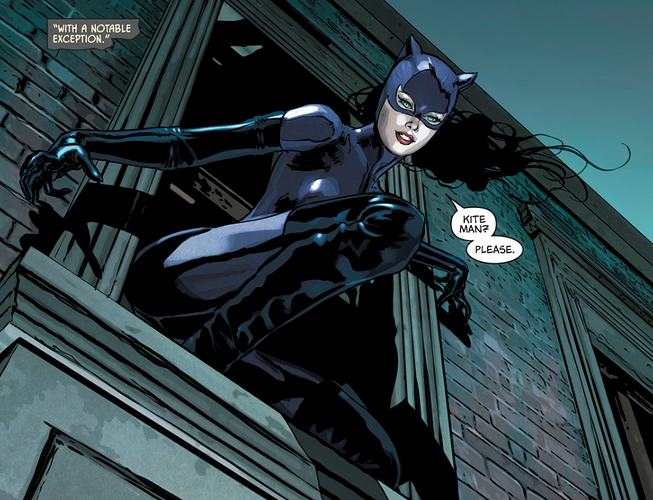 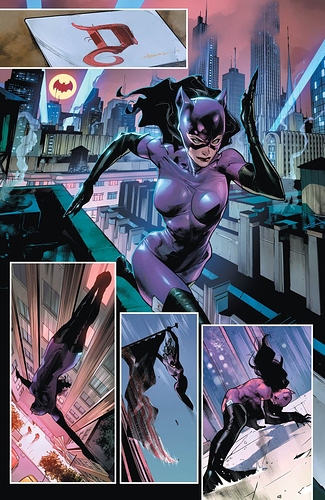 [Creel is] a great mirror to Selina.

I can definitely see that! I think a way they have a warped reflection is their desire for and how they care for their family.

I think it was very powerful to showcase a story of taking care of a debilitated family member. That’s a very real situation for many people. It’s not easy, and Jones didn’t make it seem easy, but still she showcased the real love.

Definitely, I really like that they went back to that, especially considering what we saw last week with "Relentless"and how Maggie got to be that way. I am woefully behind, so this might have happened, but I hope this means that we get to see Maggie recover at least somewhat from what happened with her and Black Mask.

I also love that she set the story in Villa Hermosa which sort of alluded to Cat’s Latinx heritage.

It’s interesting you say that, because from the Q&A Jones gave tonight, it sounds like Villa Hermosa was chosen partly because of how much of a polar opposite it is to Gotham, but also because Jones had moved to Los Angeles during that time and was just inspired from that. I think it being part of her background still works, though!

Anyways… lot’s of thoughts! I hope you enjoy this series as much as I do! It’s good to the very end! Hope everyone is healthy and in good spirits!

Hey, as you can see I can be verbose as heck, so I won’t complain! And thanks, I’m looking forward to reading more of this series too. Hope you’re doing well too.