Welcome back to another week of the World of Bats, the Batman Book Club! April is the 80th Anniversary of the debut of Catwoman in the pages of Batman, so this month we’re celebrating this by highlighting just a few of her best stories. 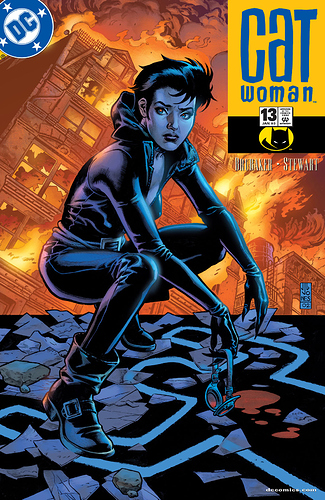 Selina sets out to give something back to the neighborhood, but a new wave of crime brings her closer to her roots than she ever imagined. And if that isn’t enough, wait’ll you learn the startling secret of one of our supporting cast members!

Here are the links for these five issues:

Let us know what you think of this story and here are some discussion questions to help out:

The discussion will be current from April 4 to April 10, but any readers from the future are free to come back and share their thoughts anytime.

To join the World of Bats, you can just click the link HERE.

Looking forward to reading your thoughts down below!

My goodness, this story is bleak. Is this the first time Maggie is depicted as something other than a nun? I think the last issue of Catwoman Vol. 2 gave the impression that she was still a nun (though it didn’t say so explicitly). I guess the upside is that Holly is alive again after Mindy Newell had killed her off in the 80s.

I was wondering about why Maggie wasn’t a nun either. Guess it isn’t mentioned anywhere else. And I’m surprised Holly was thought to be dead at some point – I guess that was the Catwoman feature Newell did in Action Comics?

I guess that was the Catwoman feature Newell did in Action Comics?

Yes. It actually predates the miniseries we covered last week. Unfortunately, those Action Comics Weekly issues have yet to be digitized. Brubaker lampshades the continuity flub in a story from Catwoman Secret Files: 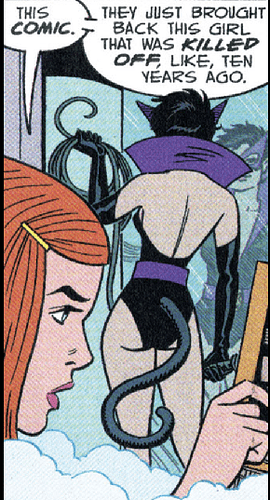 Also, if you’re curious about “The Tin Roof Club,” you can find some images from it in the blog Chris is on Infinite Earths:

Heh, I remember that story when I went through some of the Brubaker run as I was getting into comics. Figured it had to be a reference to something, but didn’t realize it was her!

I really liked Holly in that run, so I can’t really be mad that she was brought back from the dead.

And thanks for the links! Hopefully they’ll be digitized soon.

I will say, though, that Newell did a great job at retaining Holly’s accent from Year One.

What do you think of Selina’s move to (greyer) vigilantism? Is it a fitting character progression, or do you think something’s missing when she’s closer to the side of the angels?

As long as she is portrayed as willing to do things that aren’t hero like at all, I think it’s fine - preferable, even - for her to walk that line. Not a hero but very protective of others.

What do you think of their development since then and their role in this story?

I’ve always been fairly neutral on Holly so her portrayal doesn’t matter much to me. This is the first I’ve read this story so it’s good to finally discover what pushed her sis into her mental challenges.

What do you think of this take on the character? Is he more effective and notable in the Rogues Gallery with his sadism?

This character take makes sense for him, he was a bit lame before and didn’t seem truly dangerous. I suddenly find myself reading him with the voice of Ewan McGregor, though.