Hell(o) (t)here and welcome to the World of Bats, the Batman Book Club! 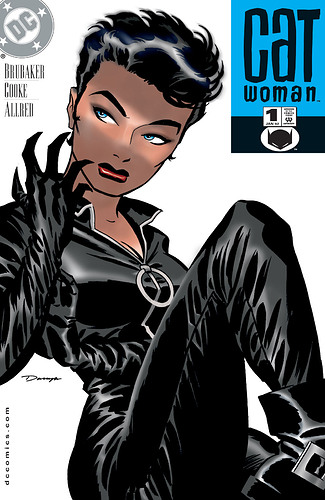 A serial killer is racking up bodies in Selina Kyle’s old haunts, taking her back to a life she thought she’d left behind permanently. Witness her triumphant return as Catwoman, brought to you by Ed Brubaker (BATMAN) and illustrated by Darwyn Cooke (BATMAN: EGO) & Mike Allred (X-Force).

And if you’re looking for a little extra, check out the back-up stories that lead up to this series, also by Brubaker and Cooke, featuring one of the big supporting characters of the series, Slam Bradley!

Looking forward to talking this story with you all!

Interesting to see Selina in therapy. I think she has a good heart, which is shown by both her efforts to find the killer and her compassion for him when she hears his story. I thought this was a great start to her series.

This is my secend time reading the story line and the first comic is my favete, i just love how it examins the moderatian of catwoman, and on my secend read i saw some forshodowing!the prostitute was wered out by the killers face at the beging of the comic, and in the end, it is reveled that the killers is a verson of clay face!

I was thrown off for a second, thinking, “Haven’t we read this one already?” But then I looked back and saw that it was actually two other stories.

Hello everyone, and welcome to the next installment of the World of Bats, the Batman Book Club! This week we’ll be going over the trade collection Batman: Ego & Other Tails, featuring the writing and art of Darwyn Cooke, as well as writer Paul Grist, and artists Bill Wray and Tim Sale. [image] Eisner-award winning artist and accomplished writer Darwyn Cooke’s (DC: THE NEW FRONTIER) iconic imagery culminates in this collection of pulse-pounding stories featuring unique visions of Batman and …

Welcome back to another week of the World of Bats, the Batman Book Club! April is the 80th Anniversary of the debut of Catwoman in the pages of Batman, so this month we’re celebrating this by highlighting just a few of her best stories. This week, we’re delving into the acclaimed Ed Brubaker run of Catwoman, specifically issues #12-16, the arc called “Relentless.” [image] Selina sets out to give something back to the neighborhood, but a new wave of crime brings her closer to her roots than …

You weren’t the only one

Interesting to see Selina in therapy.

That was interesting to see – and somewhat refreshing, since Zod knows the entire Batfamily could use some therapy.

The funny thing is that we technically we covered Selina’s Big Score twice, once on it’s own, and again with the link you posted, where it was included with Batman: Ego.

This was great. The scenes with Selina and Dr Tompkins were interesting. I didn’t know Leslie was a therapist; I guess, like Alfred, she can do pretty much whatever’s needed.

It’s nice to see Catwoman being one of the good (but not too good) guys and doing a bit of detective work. Too bad things didn’t end up quite like she intended.

The Slam Bradley backups from Detective were enjoyable, too. A fun, noir-ish, detective story.

I didn’t know Leslie was a therapist; I guess, like Alfred, she can do pretty much whatever’s needed.

That is interesting. I wonder what story was it that she started to do therapy stuff because she was definitely a regular medical doctor when she was first created. I guess she just studied up thinking “If Bruce won’t go to therapy, I’ll bring the therapy to him!”

As an aside, before I got into comics proper, I thought Leslie was a psychiatrist because I thought she was also Harvey’s shrink in the Two-Face episodes of BTAS. Their models looked just enough alike!

Definitely, I think this very influential for how we approach Catwoman in the modern day, including the recent movie, which is why I added this story for this theme month.

Absolutely, Cooke was an absolute GOAT in the industry who left way too soon.

Also, I saw that this page was a banner on the community and want to say thanks @Alec.Holland!

Also, if any of you guys are curious as to what happened to the Clayface like villain in this arc: she was definitely a regular medical doctor when she was first created.

I’m afraid I’m gonna have to “well, actually” you here. Let me put on my most nasally voice… 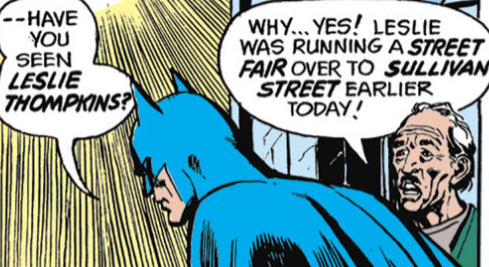 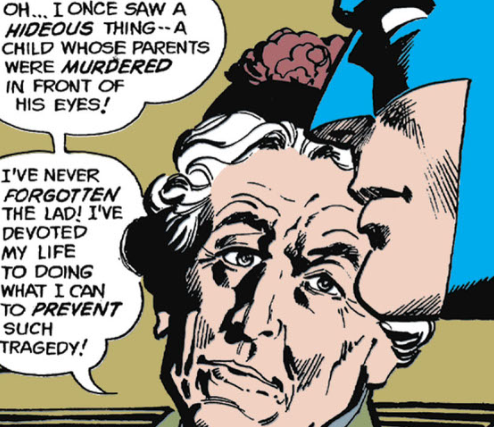 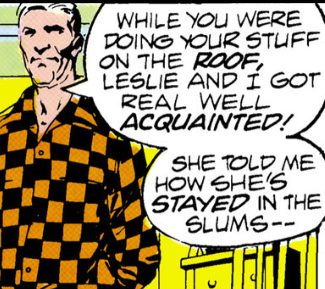 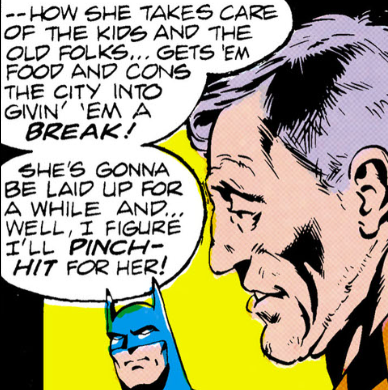 That second issue just happened to mark Batman’s 40th anniversary, a fact which was celebrated in the back of the issue in an article written by Leslie’s second-most important creative influence, after Denny: 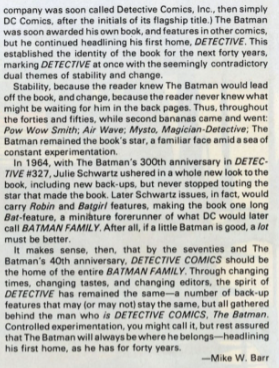 Mike W. Barr would use Denny’s version of Leslie Thompkins once (in Batman Special #1) before reinventing her as a doctor for the post-Crisis era (in Detective Comics #574). 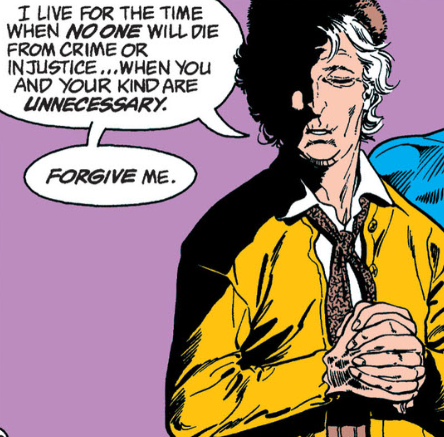 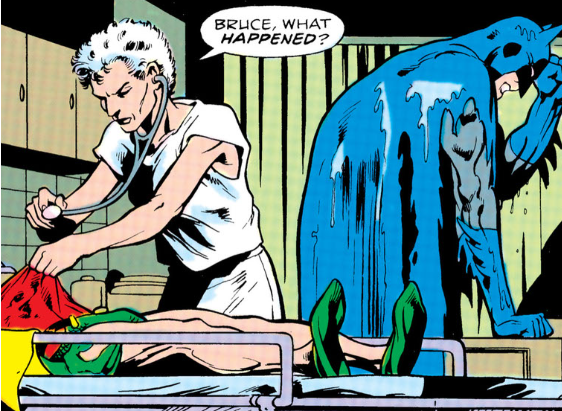 But Denny would bring back Classic Leslie one last time in Detective Comics #1000:

And yes, this was just another excuse for me to talk about Mike Barr.

Y’know, I was thinking of putting this up to @HubCityQuestion, but I should have realized you’ll know the answers about Leslie.

Any idea about the psychology angle? Was she doing that before this? I don’t remember her mentioning that in stuff like No Man’s Land.

Any idea about the psychology angle? Was she doing that before this?

Thanks to Alan Grant, yes: 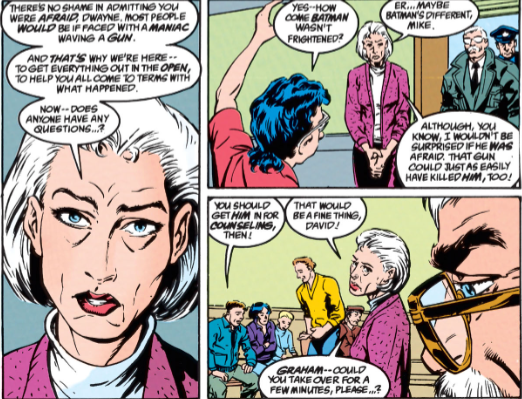 This group counseling scene is from Shadow of the Bat #26, which is part of Knightquest: The Crusade. So it’s unusual, but it’s not unheard of. I suppose it’s a natural extension of her classic backstory of comforting Bruce on the night of his parents’ murder, but it does sorta feel as though the writers are treating her as a Doctor of Whatever the Plot Dictates.

So she is basically a soap opera doctor then!

Really, all doctors in comics have ALL the doctorates.

The thing that I really liked about this story was that it had references all the way back to Catwoman’s first miniseries, seeing Darwyn Cooke’s reimaginings of those scenes was great. I did like Leslie’s role in Selina’s wellbeing a lot has been said about that here and I don’t have much to add but it was nice.

Issue 5, a single-issue story, was okay. Brubaker’s writing was what I have come to expect but the art wasn’t great. It wasn’t bad but not at the same level seen in the first 4 issues.