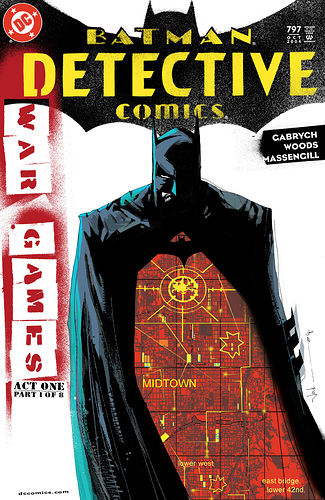 Howdy Batfam! I hope you and yours are safe and healthy during these times. We are all limited in what we can do right now, but thanks DCU we can at the very least offer you all a little entertainment and distraction while we wait for things to resume there normal course. This month World of Bats Book Club and the Renegade Robins Club team up to bring you a new Casefile. #003. Batman: War Games! Gotham City breaks out into an all out gang war. In what should have been just another epic contingency plan gets spoiled thanks to a rouge Robin. Amidst the chaos, Gotham finds a new crime lord and one to not take lightly. Be sure to find out what happens and be sure to check out the Renegade Robins Club May 25 for when the hoods of Gotham get a little redder!
CASEFILE 003 will run for the duration: Rigth now

Join in and share your thoughts below! Be safe and as always happy reading.

Below is the reading order with links, complements of @AlexanderKnox

Are there certain dates for each part, or are we just plowing in?

I remember it being pretty long (three trades worth back when I was getting into comics and getting trades from the library), but DAMN.

Like I said, I’m not a fan of this story by any stretch, but what the hey. Maybe I’ll find something here to appreciate, but at the very least I’ll probably have fun tearing it into pieces.

Also, thanks for using this as a Casefile, I was starting to worry that it might just end up being my crutch when I can’t choose what story to cut for my month.

I remember it being pretty long (three trades worth back when I was getting into comics and getting trades from the library), but DAMN.

I had the same thought. I was gonna have it be the last week when Knox provided me with the list and suggested making it a Casefile. I said something along the line of “yeah maybe a Casefile would be best.”

I think we can probably just take each act a week at a time.

Anyway, I just finished Act I, and I thought it was excellent. It’s well paced, it has good art all around, and it does a good job at building suspense and escalating the stakes. Perhaps there’s something cathartic about reading a story where everything is falling apart and everyone is panicking during an emergency situation. Tim Drake mentions that most of the schools in the city had shut down due to the gang war, and I was like, “Perfect time to read this.”

So I finished the other two acts today (yes, I know, it’s sad), and you know how I praised the first act for its writing, art, and pacing? Well, those things start to slip a bit around the halfway mark. The story becomes a little too interested in the catalyst for these events when the mob war itself is the most interesting part of it–after all, it’s essentially the climax to years of “crime thriller” storytelling that had become the norm around the year 2000 after No Man’s Land concluded.

Still, I don’t think it’s a bad story…until the last few pages, when a certain character meets a certain end for no discernible reason after receiving an injury that didn’t seem that bad. Spoiler’s death serves no purpose in the story as told. The narrative would work just as well without it, if not more so. You could say that it’s some kind of poetic justice for having caused so much chaos, but if that’s the case, then shouldn’t Bruce be the one suffering that fate instead? It was a bad call, Ripley.

You know, as I was going through the first act, I realized something: DCU is actually missing a big part of this story. Batman: The 12 Cent Adventure, which actually has the moment that sparks the whole gang war.

We’re also missing the Robin/Spoiler Special, which helps to retcon the ending of this story.

So I’m gearing up for my club’s coverage of Under the Hood in a few weeks, and I’m really appreciating the chance to look over War Games first. It’s nice to be able to go, “Oh, yeah: THAT’S why Nightwing has that leg brace!”

Meanwhile, I read War Crimes, and that was truly terrible!

Okay, so going through the first act, some thoughts:

This is the first time I’ve read this story and so far (I just finished part 5 of Act 1) I think it’s great. I think it’s got some tight plotting and it’s telling a riveting story. I most wanted to chime in and praise the writing on Robin #129, it introduced a character that I had never seen before and I was quickly invested in what happened to her. I was more impacted than I expected when Darla was shot at the end and Tim was performing CPR.

Also, thanks for compiling the storyline like this. There is a distinct possibility I would not have started reading it otherwise.

I believe that was a character that had been part of the Robin cast for at least a few years before this.

I suspect you’re correct. There certainly seemed to be a relationship between the aforementioned character and Tim.

This storyline has had a lot of characters in it that I’m not familiar with. I know enough about the big players, but I don’t know anything about the history of Orpheus, Onyx, Tarantula, Spoiler, or the aforementioned character. I know very little about Cassandra Cain. So far, the story seems to be written such that I don’t think I’m missing too much.

I just finished act 2 part 2 and I have some more thoughts.

Does anybody else think it’s weird that Batman doesn’t recognize this as one of his contingencies gone wrong?

Isn’t it unlike Batman to not notice that Spoiler stole something from him?

It was also a little offputting when Batman asked for control of the police.

I’m definitely still enjoying it though.

Yeah, while I still enjoyed the story overall, the things you mentioned start to bring it down after the first act. War Games directly precedes Under the Hood, and some of Batman’s behavior toward his team has repercussions in that story. His treatment of Oracle here is especially frustrating.

I just finished act one, and I liked it overall except for the ending. The turnabout by the reporter just seemed to come out of left field and it was a very strange assumption for them to make. It doesn’t work for me that they think because Batman is carrying someone that’s injured that he just must be responsible for it. That’s some poor reporting right there.

Just finished Act 3 part 4 and I wanted to comment about the juxtaposition of Tim’s more upbeat story and Stephanie’s darker story. Tim is joking around and thinking about how Batman needs someone to lighten things up a bit while Stephanie is fighting for her life. Tim’s foes in this issue are the Trickster and Mr. Fun. I see it in the artwork, too, Tim’s pages are brighter and more colorful than Stephanie’s. Maybe it’s too obvious but it seems like Tim was being built up while Stephanie was being torn down.