Welcome back to the World of Bats, the Batman Book Club, and a special edition too! Today we’re unlocking a new Casefile – larger stories that may take more time than the usual books and for special occasions – and what a special occasion this is!

For the rest of the month of April, we’re going to have a deep dive into the most recent big addition to the DC Universe library of comics, “Batman: White Knight!” 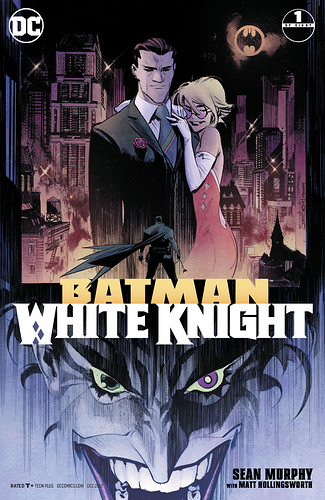 In a world where Batman has gone too far, The Joker must save Gotham City.

He’s been called a maniac, a killer and the “Clown Prince of Crime” but “white knight”? Never. Until now…

Set in a world where the Joker is cured of his insanity and homicidal tendencies, The Joker, now known as “Jack,” sets about trying to right his wrongs. First he plans to reconcile with Harley Quinn, and then he’ll try to save the city from the one person who he thinks is truly Gotham City’s greatest villain: Batman!

Superstar writer and artist Sean Murphy (PUNK ROCK JESUS, THE WAKE) presents a seven-issue miniseries of a twisted Gotham City with a massive cast of heroes and villains that, at its heart, is a tragic story of a hero and a villain: Batman and The Joker. But which is the hero—and which the villain?

Link to the series can be found HERE!

Let us know all your thoughts down below! And if you haven’t joined the World of Bats club already, you can do so by clicking HERE! And if you have any questions, you can contact @Jay_Kay, @BatJamags, and @AquamonC137.

So great that they got this on here! This is one of the best Batman and Joker stories. Looking forward to going back over this and a great time too, having just finished Curse.

Huge fan of the universe Sean Murphy built! I love how it is built in its own world but still pays homage to past interpretations of the bat by bringing some older fan favorite materials into his story. From the story to the art style, it was impossible to put down. I wouldve liked to see Dick Grayson featured a bit more but I’m sure we’ll see that in the future.

Looking forward to going back over this and a great time too, having just finished Curse.

Definitely, I’m curious if perhaps there are any hints to what was revealed in Curse in White Knight…

I wouldve liked to see Dick Grayson featured a bit more but I’m sure we’ll see that in the future.

Funny you should say that, because over at the Q&A Sean Murphy did for here yesterday he did talk about doing more with Dick in the near future. Presumably it will either be in the next installment, or in some other side series in his pop up imprint he announced earlier this year. 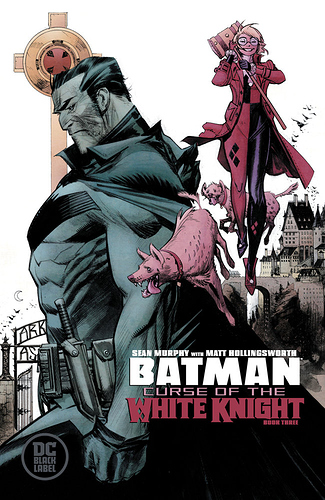 I adore Sean Murphey’s work since, Punk Rock Jesus; everyone should read that BTW.

+Yup. 1st time.
+Nope, did not live up to the hype. I kept hearing people say this is an “all new dynamic” of Joker being the hero and Batman the villain. Nope. Disagree. Joker is still a villain and Batman isn’t a villain. This was a new angle of the same dynamic. Maybe a nitpick, but still. I was disappointed in that aspect.
+The art? Phenomenal. The story? Captivating. The world building? Lovely. So much awesomeness in this story. The unfortunate truth, it did not live up to the hype.

This story features a take on the Batman world that feels both similar and yet takes shocking liberties with the original source material. What differences did you like? What changes didn’t you like?

+I didn’t find it shocking. Batman has been shown to be ruthless in other interpretations.
+I liked that they pointed out how Batman doesn’t listen to people. I didn’t like how much it was insinuated that Batman is just as bad as Joker.

This was my first time reading this series and I must say I was thoroughly surprised and entertained the entire time. The way Batman and Gotham as a whole are portrayed are unique and fun. Not the biggest fan of Batman’s attitude in this. Don’t know how to convey my feelings about this iteration without spoiling but I’ll say even if I’m not a fan I respect it. I respect what the Author intended and have to respect how brilliantly he pulled it off. Personally I’m dissatisfied with a part of the ending that will keep my from being too excited for more from this alternative universe. However, everything else about the comic will keep me coming back nonetheless.

This is definitely the most interesting Batman take in a long while. It gives the Batman myth the critical dismantling that Superman had endured for few years. I think the social commentary of Backport, and the devastation fund remains in harmonious balance with gratuitous fan service ( aka the super villain team up and retro Bat-mobiles. The art design alone is worth the read.

VVELCOME! Velcome! Welcome, to the DCU+ Community. I’m sorry that you didn’t care much for this version of Batman. I thought it was cool. [×]

Side notes: I was really fun to read. I enjoyed reading joker as when I read joker I hear it in the Mark Hamil voice but when he was Napier my mind just auto switched it to marks normal voice for him. I did feel sad for Clayface throughout the whole thing get torchered and brained. Nice to see him get some payback.

Overall very awesome story. Would love to see it as a movie/show live/animated.

It’s always nice to see someone new. I agree with the notion that the artwork alone is worthy of the read.

I’d love to see an animated version of this as well and the feeling is mutual about having Two Harleys. I mean, it ended strong, but… It just left a bad taste in my mouth, an awkward taste TBH. Like, wait, why, why are there two Harleys?

That were my first thoughts when it happened. After issue one I was hoping they wouldn’t leave it with just that. Glad they came back explained and changed her to something different.

Well, I finally finished reading this series. (I had started it quite a while ago, but I put it down and never got back to it.) Is it too presumptuous to call this the new DKR? I doubt it will have that degree of impact, but it’s possibly the most satisfying and fully-realized alternate universe since Miller’s, and it deconstructs the post-Miller Batman in much the way that Miller deconstructed the Batman that came before him. All-around excellent.

I kept hearing people say this is an “all new dynamic” of Joker being the hero and Batman the villain. Nope. Disagree. Joker is still a villain and Batman isn’t a villain. This was a new angle of the same dynamic. Maybe a nitpick, but still.

I think part of the newness of it was less Joker vs Batman, but Jack Napier vs Batman. It was interesting, I thought, to see what Jack was willing to do to try to show the inherent corruption around Batman while corrupting himself in the process, trying to destroy each other to the point where they almost allow Gotham to be destroyed in the process.

It gives the Batman myth the critical dismantling that Superman had endured for few years. I think the social commentary of Backport, and the devastation fund remains in harmonious balance with gratuitous fan service ( aka the super villain team up and retro Bat-mobiles.

I agree that’s definitely one of the unique things about this book, that it kind of addresses those critical aspects, but in a way that allows our heroes to still be that – just humans who are prone to error, like everyone else.

Freeze be friends with the Wayne’s was nice. A change I hated at first was the two Harleys but as the story went on and they made one neo joker I came to like it.

Yeah, the Freeze stuff was great. For anyone who doesn’t know, Murphy did actually flesh out that backstory in a one-shot between issues of Curse of the White Knight called “Batman: White Knight Presents Von Freeze,” written by him and drawn by Klaus Janson. Hopefully it and Curse makes it to the service soon. 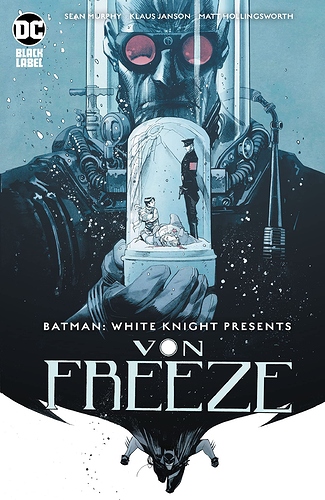 I also wasn’t into the whole “two Harleys” thing. I thought it was just a comic version of the more trite and misogynistic arguments about more recent takes on Harley that basically devolves into “this isn’t real Harley because she dresses like a hooker.” But Murphy proved me wrong, and he did some really interesting character work with that other Harley.

Overall very awesome story. Would love to see it as a movie/show live/animated.

I’ll second that as well. It’s very similar to White Knight in that it plays a lot with controversial issues, but in a way that is humanistic. You can see how the author leans towards one perspective, but he doesn’t make the one’s he’s against all evil all the time.

Is this your first time reading it? Do you think it lives up to the hype?

I read this as it came out, and quite like it. I think it’s a really good “elseworlds” take on Batman.

I liked how Batgirl was the voice of reason, and the two Harleys. I’m not sure that there was anything that I just didn’t like.

I would love to find out more about Nightwing’s history since he wasn’t the first Robin, and more about some of the villains like Mad Hatter.

I really enjoyed the book! I wasn’t aware of much of the hype, honestly, and I went in not knowing at all what it was about.

I thought the characters were really layered and Murphy did a good job of exploring their emotions.

Would I be alone in imagining a movie adaptation (or HBO Max miniseries) in which they can tell the White Knight story, and have it starring…Jared Leto?

Absolutely! That would be a very cool way to adapt it. Hadn’t thought of Leto but he is a great actor and some odd tattoo choices aside he did some good stuff in Suicide Squad, what little we did see (#releasetheayercut).

Speaking of possibly redemptive casting with a film adaptation, I had the idea for a while that an interesting choice to play the older, Germanic Mister Freeze would be Arnold Schwarzenegger. Given the right direction, I think he could pull it off.

Would I be alone in imagining a movie adaptation (or HBO Max miniseries) in which they can tell the White Knight story, and have it starring…Jared Leto?

I would love to see this adapted to film or tv. Leto might not have been the first to come to mind but he is a good actor and honestly I’d be okay with giving him another go. He didn’t really get a chance and apparently most of his stuff was cut out.

As a side note, as someone that has only recently began to notice that modern era artists & writers are actual people. That it might not harm my beloved stories to learn about the person that makes it possible. Sean Murphy is 1 of the about 5 that gave me pause. To take notice of the person behind the great work of art.