Hello and welcome to a new installment of the World of Bats, the Batman Book Club!

This week we’ll be taking a look at the six-issue mini-series Batman: Universe, written by Brian Michael Bendis and drawn by Nick Derington! 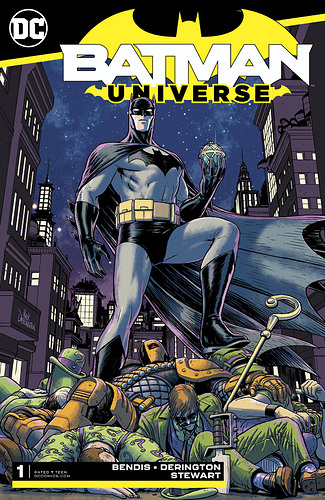 The Riddler has stolen a priceless jeweled egg, and Batman is on his trail, chasing him from Gotham to Gorilla City and points beyond. But when Batman catches up with the crook, he realizes something is wrong with his old foe. The egg is possessed of some strange power that is scrambling Riddler’s brain. The clue to what this is may lie in who hired Riddler to steal the egg: Vandal Savage. What does the immortal mastermind want with it? Batman’s quest is like a tour of the DC Universe, spanning space and even time. Guest stars include Green Lantern, Green Arrow, Deathstroke, Jonah Hex and more!

You can find a link to the mini-series here: DC UNIVERSE INFINITE

So let’s take a tour of this tour, and share your thoughts down below!

And if you’re looking for more, I got you.

The World of Bats is doing a month-long Casefile of the (in)famous All-Star Batman & Robin, the Boy Wonder!

Hello everyone and welcome to the World of Bats, the Batman Book Club! And you read that right, this entire month of April we have another Casefile, where we look at a large batch of comics that would normally be too much for one week. And what a batch we’re covering this month! Written and drawn by two of the biggest titans of comic books, this famous series, which ran for over four years, has been talked about for decades since and is considered one of the most influential takes on the charac…

@Bar-El is doing a neat read-along for the first arc of Superman/Batman, “Public Enemies,” leading up to a cool WAL of the animated movie!

Harley’s Crew is at the tail-end of exploring issues of the 2000 series of Harley Quinn as she causes mayhem in Metropolis, as well as the one-shot Harley Quinn & The Suicide Squad April Fool’s Special!

Hey everybody! Since it’s April Fools this week: Welcome to “Evil Anonymous”, a new support group for troubled villains, where NO problem is too big or too deranged for Dr. Quinzel to use against you handle.

[image] (Curious what the catch is?

We are back with another Spotlight, everyone, this time highlighting Huntress

The Dick Grayson Book Club through the month of April will be looking at the Teen Titans: Year One mini-series!

[919N0LSJzJL] Happy April Fools’ Day, my fellow Grayson Gang! This month, we will be reading Teen Titans: Year One #1-6. Personally, this series holds a very special play in my (Nightroia’s) heart. These issues were the first comic books I ever read (along with Robin: Year One), and this series is what got me so into comics in the first place. I hope you all enjoy it as much as I did! Journey back to the formation of the Teen Titans and experience the group’s earliest victories.

Over at Renegade Robins, the group will be looking at the last days of Damian Wayne as the start of the “Robin Rises” event, as well as the Outlaw Jason Todd trying to teach a young generation of neer-do-wells.

[photostudio_1614197884659] Hello and welcome everyone to @RenegadeRobinsClub’s ROBIN RISES EVENT What is this event all about you might be asking? Every story Damian has been in thus far has been working toward this series of events. Since these particular stories are so pivotal to Damian’s character I have elected to cover them in monthly sessions over the next three months rather than using the normal set up we’ve been doing. I’m hoping this will foster a chance for a more in-depth discu…

Oh, this one is quite fun, though also I think a bit shallow in terms of Bat-characterization or themes. I collected it in the Walmart specials, and the art by Derington really lifts it up into something special.

It is pretty fun! I collected some of those specials but not all of them to complete the story. So some of this I’ll be reading for the first time!

Shallow…I kind of agree and disagree. This is definitely a lighter Batman, but I think it works, especially for this story. I think so far he’s a good mix between the serious and determined crimefighter, without being too dour.

There’s a few notes that we get further along that just feel off. Plus, I don’t quite get what Bendis is really saying about Batman. Maybe that shouldn’t be necessary - we certainly have enough stories that are like, “THIS IS WHAT BATMAN IS, DEEP”, and I myself have complained that I’d like more simple Batman adventures or mysteries. But this one is a bit too far on the wacky side for me to really embrace it. Other than the art, as I said. The art is without compare.

I collected it in the Walmart specials,

Same here. I liked it well enough, though it’s not my preferred type of Batman story.

I thought this was very entertaining and I enjoyed reading it a good bit. Batman as a cowboy was something I didn’t know I wanted and it was fun seeing him interact with other heroes. While I didn’t know it specifically, it was certainly not a surprise that Batman loves dinosaurs (does that count as characterization?)

Towards the end the artwork reminded me of “Oh, the Places You’ll Go”, the book from Dr Seuss. That has to have been intentional, especially since it fit so well thematically. The artwork was great.

There’s a few notes that we get further along that just feel off. Plus, I don’t quite get what Bendis is really saying about Batman. Maybe that shouldn’t be necessary - we certainly have enough stories that are like, “THIS IS WHAT BATMAN IS, DEEP”, and I myself have complained that I’d like more simple Batman adventures or mysteries. But this one is a bit too far on the wacky side for me to really embrace it. Other than the art, as I said. The art is without compare.

I suppose you could say that it’s saying something by not being too deep or grim. It’s saying that Batman can do any kind of story, whether it’s grim and gritty detective stories, or wild romps where he gets involved with Gorilla Cities, gets lost in outer space and goes to dinosaur islands. He can do all that and still feel like the same character.

As for a few notes, the only one that sort of felt off to me was when he got back to present time and landing in Crime Alley as he was dying. I think Bendis kind of undersells Bruce’s feelings for a joke or humorous note that just rang false to me. I think instead of being “upset,” we’d see more of that grim avenger come out, saying that he is not going to die there.

But that’s just me.

Batman as a cowboy was something I didn’t know I wanted and it was fun seeing him interact with other heroes. While I didn’t know it specifically, it was certainly not a surprise that Batman loves dinosaurs (does that count as characterization?)

He’s done the cowboy thing a couple of times – most notably in Grant Morrison’s Return of Bruce Wayne storyline, as well as the Justice League Unlimited two-parter “The Once & Future Thing.”

I LOVE the dinosaur nerd aspect of Bruce here. Like, it makes sense in a way – why else would he keep a robot dinosaur in his cave? It’s instantly become canon for me.

I read this as it was being released on DCUI. Honestly, I didn’t dig it too much. For the longest time, I was only reading the digital firsts for Batman as I am not the biggest fan of his. While this and many of those stories came from the same Walmart specials I was more into the Gotham Nights stuff.

I will say that Universe had a lot going for it but something just didn’t hit it for me. I remember thinking this was my least favorite when compared to the Wonder Woman and Superman stories that were released here the same way.