So December is a month full of holidays, and the thing that they all have in common is getting together with and embracing your family, so this month we’re going to focus on that element of Family within the Batman universe. Last week we focused on Batman’s relationship with the love his life (fight me in real life), Catwoman. 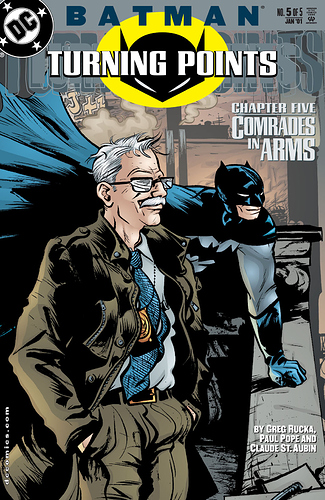 BATMAN: TURNING POINTS centers on the ever-changing alliance between Batman and Commissioner Gordon, starting with the early days in which the duo struggled to earn each others’ trust.

As the Dark Knight and Gotham City’s top cop fight the forces of evil, they also must learn to rely on one another – even in the midst of utter chaos in the city both men have sworn to protect!

The link to the series can be found HERE!

I could nitpick some of the minor continuity hiccups, but it was enjoyable nevertheless. AzBats certainly came off more genuinely threatening than he did in the actual Knightfall saga (mainly because it felt as though the writers of “Knightquest: The Crusade” could never commit themselves to a murdering Batman).

Read them this morning. Not bad, defiantly enjoyed the last one. There were a few small raised brows with some of the dialog/interactions between bats and Gordon that seemed out of character but that’s just a personal opinion thing. Will swing back later today with a few screen shots. Had never read these, well apparently I had read the first one according to the app but I have no memory of it LOL, but a good read overall.

Damn, that was fast!

Issue 5 is a prelude to the Officer Down arc

Heh, I didn’t realize this was right before that arc, that’s kind of funny. Here’s a nice little series about how Batman and Gordon have been and always will be friends…and then BLAM!

I remember feeling that way a couple times too, but at this point I don’t even remember which ones they were, so…

Had never read these, well apparently I had read the first one according to the app but I have no memory of it LOL,

I’ve had that too! Like I’ll go down a series on the app and it will have random issues I know I haven’t read with the little blue line saying I have. I think it’s a bug or something with that system.

Thanks to the both of you for sharing your thoughts!

Heh, I didn’t realize this was right before that arc, that’s kind of funny. Here’s a nice little series about how Batman and Gordon have been and always will be friends…and then BLAM!

Oh, certainly. I’m pretty sure that this series was made precisely because they were planning to shoot Gordon two months later. The final issue even introduces soon-to-be-commissioner Akins.

Yeah lets worry more about Gordons approval than those ppl’s safety in the church bats. Also, could you look for that jar of pennies I buried under there. (Stand by Me) 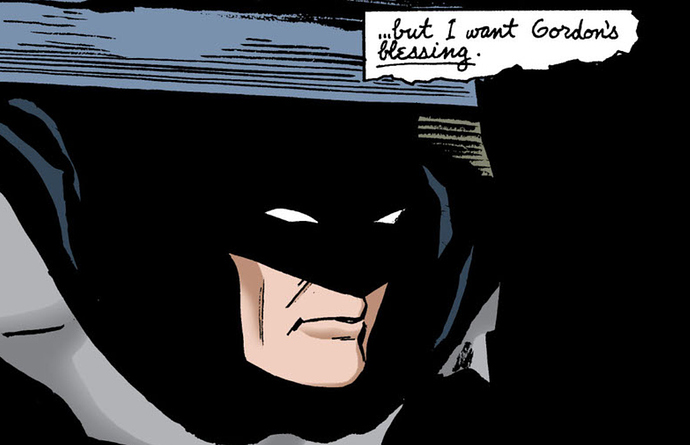 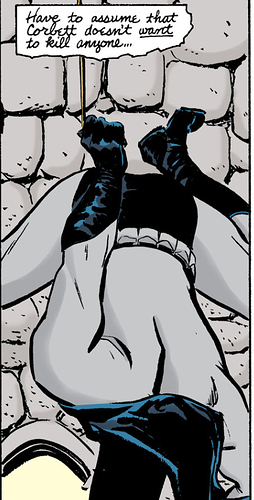 yeah just this whole scenario with bats wanting to get personal. 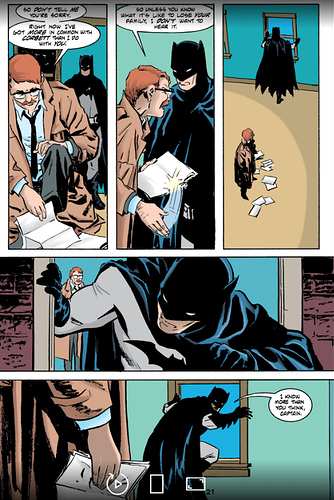 IDK I feel bats would take issue with the level of violence here. I mean, I’m cool with it but I just imagine if it had been Jason he would have scolded him. 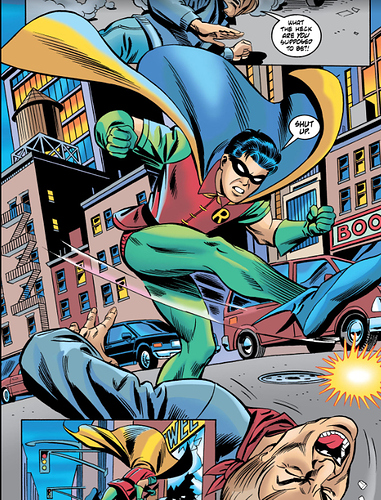 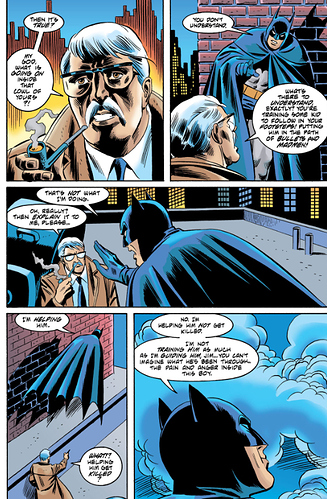 Even though it’s a cash register and not a type writer, this panel reminded me of that fight with Bats and Deadshot once he escapes from prison and gets some new duds 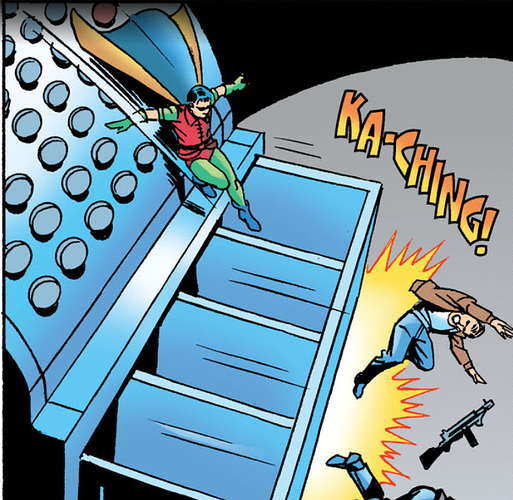 Seriously WTF (and I don’t use that often) Bats saluting Gordon. 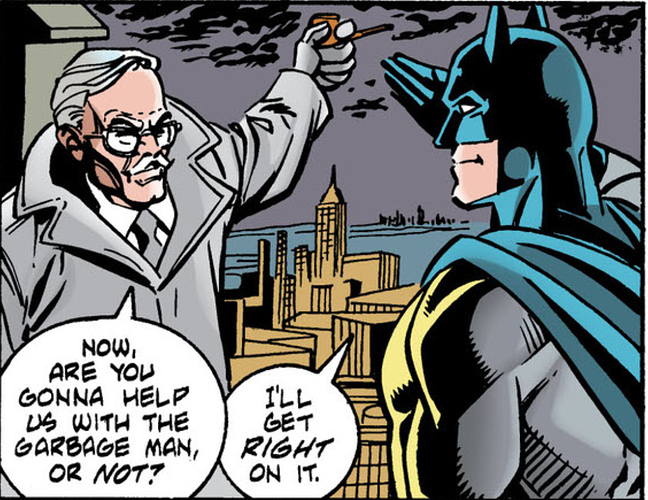 Is that the woman from Year One? 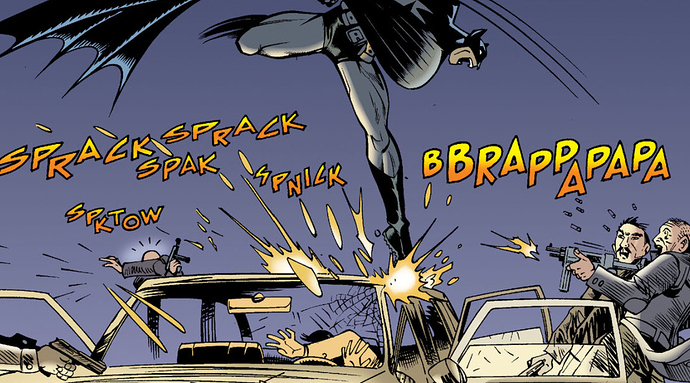 And does anyone else get Year 100 vibes from this art? 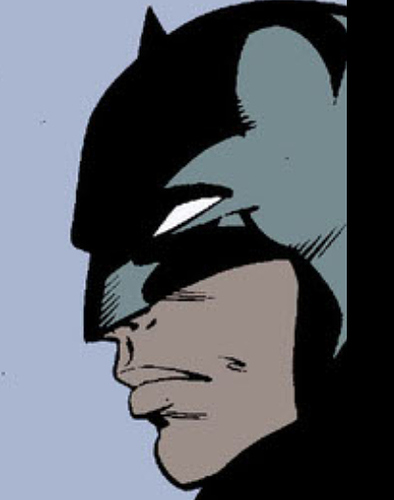 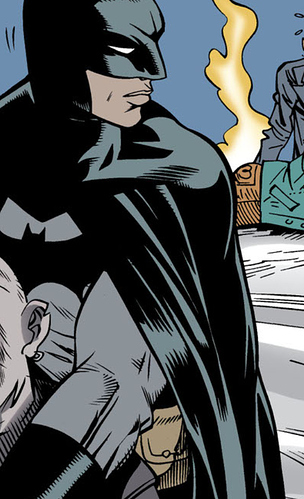 Anywho, just having some fun ripping into this. Not a bad read and I liked how it came full circle with the guy from issue 1.

Oh howdy y’all hope you guys have been well. It’s good to be posting in here again, it’s been a while.

Is that the woman from Year One?

Yes. Gordon married Sarah Essen shortly before the start of Knightfall (despite the best efforts of Flass to ruin things). Then the Joker killed her at the end of No Man’s Land. She apparently didn’t get killed in Frank Miller’s universe, since Gordon is still married to her in The Dark Knight Returns.

yeah just this whole scenario with bats wanting to get personal.

It was a bit awkward, but I guess it usually is when one tries to get more personal in a working relationship. It is odd to see Batman be the one trying to let someone in – usually, it’s someone trying to damnest to let them in. Selina might be jealous.

IDK I feel bats would take issue with the level of violence here.

I can see that. It is also funny to see such gritty results like teeth breaking off in what’s essentially a Silver Age story.

It is odd hearing Batman talk about a “darkness” inside Dick, but I do like Gordon’s initial reaction of “you have A KID fighting with you?”

And does anyone else get Year 100 vibes from this art?

It’s good to be posting in here again, it’s been a while.

That is has! Glad to hear your thoughts.

“Will swing back later today with a few screen shots.” Let me help you with inventorying those…

I’m a little torn on reading this one, simply because it’s such a merry-go-round of writers and artists for what’s supposed to be a singular story… that’s a little crazy, but I’m going to assume that the Greg Rucka came up with the basic plot and everybody else filled in the meat to the bones.

I’ll bookmark this one for the coming weekend as well. This is from one of my favorite eras of Batman writers when you had Rucka, Brubaker for writers and Lieber for artist.

Not to throw shade on Mr. Dixon. I really enjoyed his “Way of the Rat” with Cross-Gen comics, “Birds of Prey”, run here and “Winter World” at IDW among others.

Not a bad morning read.
I wasn’t always sure what the point of it all was, other than nostalgia and a glimpse at some deeper character interaction between Bruce and Jim.
Like @AquamonC137, I also appreciated how we ended where we started. It help make the set a little more cohesive. ( I also agree that Dick came off a little aggressive. Not really how I think of him; but maybe in those first days the anger inside him was more than we realize).
I’m going to admit, underlining every third word someone said really started to irritate me.

I’m glad that tapered towards the end.
Some of the art kept giving me déjà vu. I’m not sure what it reminds me of, but defiantly something of my past. 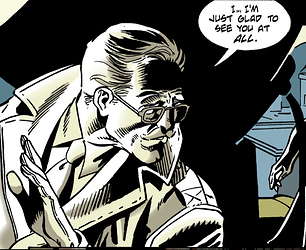 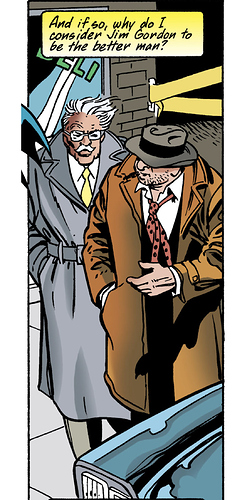 image1110×2202 1.39 MB
I guess that’s the feeling we are suppose to have. A remembrance of things past.
As a sidebar: Using a Dalek for the bat signal might have some unintended consequences down the road. 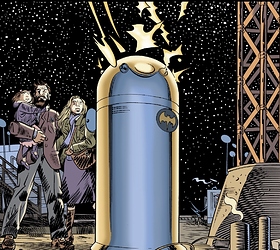 it’s such a merry-go-round of writers and artists for what’s supposed to be a singular story… that’s a little crazy,

Yeah, I can understand the artists being different because I think each issue is going for a specific vibe, but the multiple writers surprised me. I mean, Brubaker and Rucka were frequent collaborators (they would start doing Gotham Central shortly after this), but Chuck Dixon was really a surprise. At least that was for more of his era of writing the books, so that felt authentic to that era.

Hope you enjoy it, Don!

( I also agree that Dick came off a little aggressive. Not really how I think of him; but maybe in those first days the anger inside him was more than we realize). 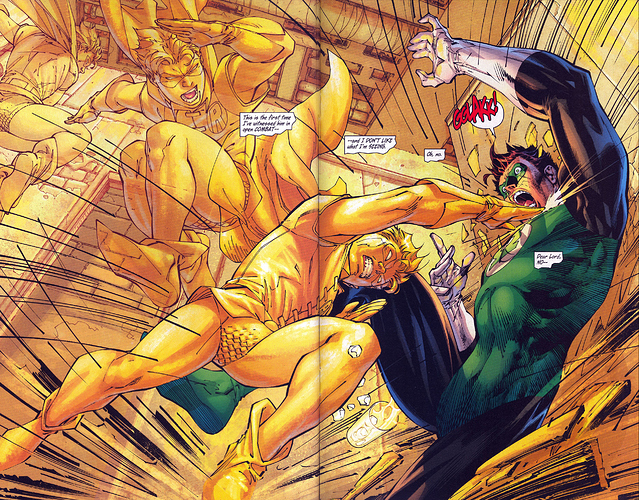 Using a Dalek for the bat signal might have some unintended consequences down the road.

Welp, I can’t unsee that!

Thanks for stopping by and sharing your thoughts @jenoutmind.

Welp, I can’t unsee that!

Anyone else need this? 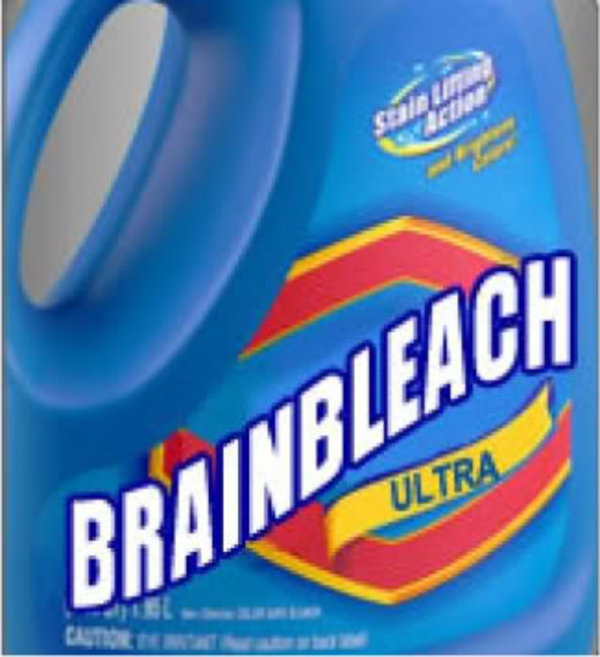 included with every Tom King Story LOL. I know, I know some folks think he’s good.

I agree with everyone above concerning the nice bookends approach to issues 1 and 5. Too bad this was all just a tribute to a character they were soon to get rid of, yikes…please don’t do a five issue special about me anytime soon, moommmieee.

Also, concerning the art, it was great seeing industry-leading artists at the start, middle and end of the series: 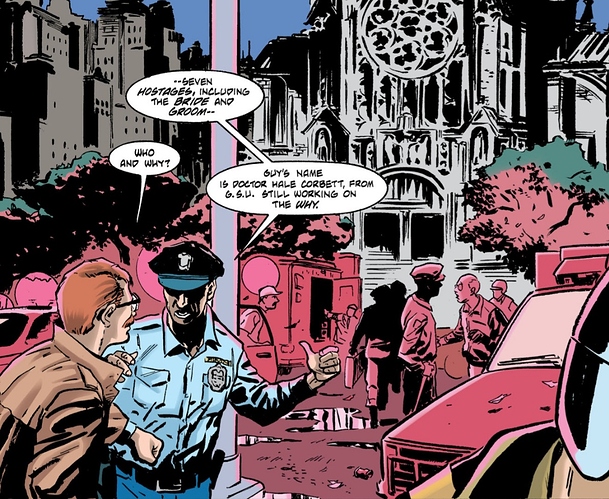 Issue 3 has the sweet sweet Joe Kubert cover reminding everyone how to convey drama and realism on a comic book cover: 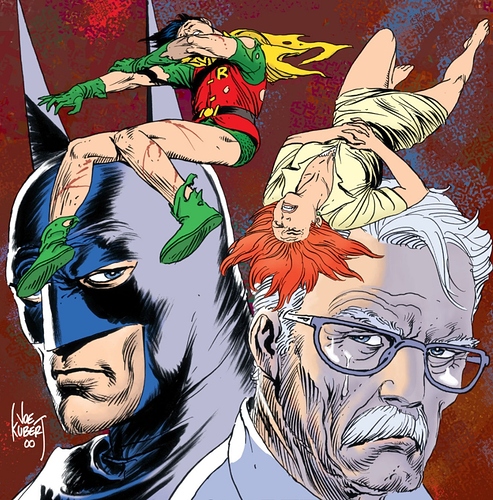 And, issue 5 as has been noted, the “Batman 100” vibe guy, usually a self published artist / writer, Paul Pope shows us Batman and the surrounding characters like we seldom see them: 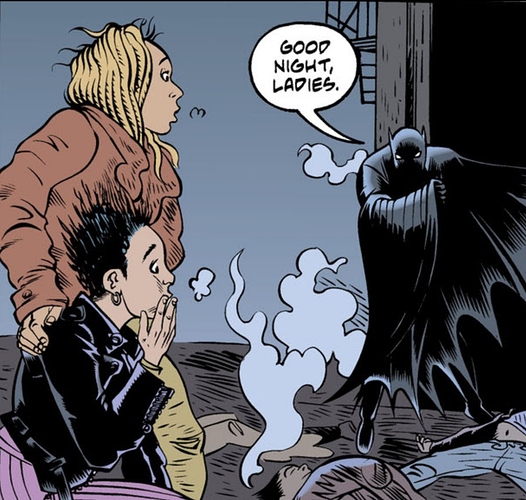 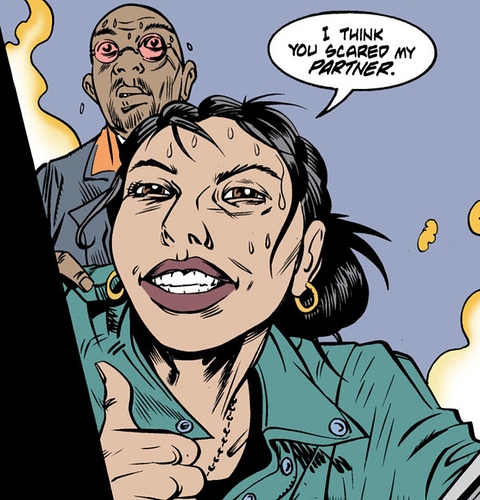 @AlexanderKnox your summary of which eras each comic represented is spot on, thanks. Normally unless it’s Gotham Central, I normally avoid predictable Mr. Freeze stuff, but this blast from the wild Silver Age Batman version was just fun.

Oh, one other note- funny how much this issue #4 cover reminds me of the New 52 Jim Gordon in a Batman exoskeleton patrolling the streets. 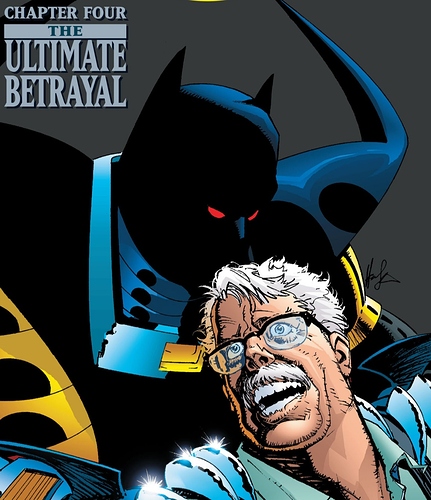