This month we’ll see the release of the highly anticipated Batman/Spawn crossover by Todd McFarlane and Greg Capullo, so for this month I thought it would be fun to take a look at some other times that our Caped Crusader has crossed paths with characters outside of the DC Universe. We’ll be starting with Batman/The Shadow, written by Scott Snyder and Steve Orlando, with art by Riley Rossmo. 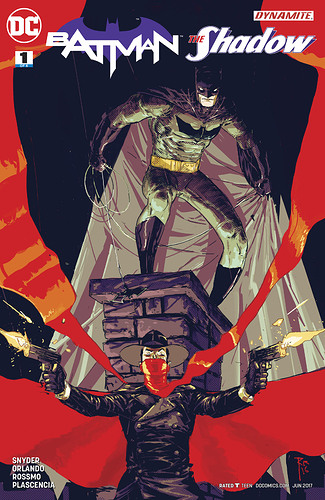 Murder has come to Gotham City, and Lamont Cranston appears to be the culprit…but he’s been dead for over fifty years! Batman will go to the ends of the Earth to unravel the mystery of Cranston’s life, but the mysterious Shadow will do everything in his power to stop him from learning too much…

Looking forward to discussing this story with you all!

Yeah, I definitely wouldn’t say no to those. Didn’t Denny O’Neil write some of those? I want to say there is some stuff from those stories mentioned in this one as well…

This was an interesting story. I have never read the Shadow, so I enjoyed learning more about him and his powers. Nice to see Batman stick to his no killing rule and reject The Shadow’s claims that he actually trained Bruce. I don’t know if I would say this a great story, but I did enjoy it.

Glad you liked it!

I have to say I don’t have a lot of experience with The Shadow in comics either. In fact, I have to say most of my knowledge of the character before these comics came from the 1994 movie starring Alec Baldwin. If you haven’t seen it, I definitely recommend it, it’s a great movie.

Yeah, I don’t know much about the character either. I listened to some of the old radio shows with my dad when I was a kid, and enjoyed them.

There was a handful of 90s movies about 30s and 40s comic book characters: Dick Tracy, The Phantom, The Shadow… it’s an interesting chapter in the history of comic book movie adaptations, isn’t it?

Looking forward to this.

There is a decent version of Lamont “The Shadow” Cranston on Tubi. It’s called Invisible Avenger.

I really liked the Alec Baldwin vehicle. Most of those 90s movies were pretty good. They just didn’t have the oomph to start a franchise.

A rad tie-in to Batman/Spawn, @Jay_Kay!

Typically, I loathe crossovers such as these, but Batman/The Shadow was surprisingly good, as was Justice League/Powers Rangers, to cite another of the very rare good cross-publisher crossovers in recent memory.

In fact, I have to say most of my knowledge of the character before these comics came from the 1994 movie starring Alec Baldwin. If you haven’t seen it, I definitely recommend it, it’s a great movie.

The Shadow is a great movie. Its among the best of the one-off comic-based movies we got in the '90s, along with The Rocketeer, The Crow, Judge Dredd, The Phantom and Mystery Men, among others. The movie also has a very schway toy line by Kenner that’s very easy and affordable to get into.

As for my introduction to The Shadow, it was my mom’s audio cassettes of the radio series that starred Orson Welles. Its commercials for Blue Coal still burn bright in my mind today. 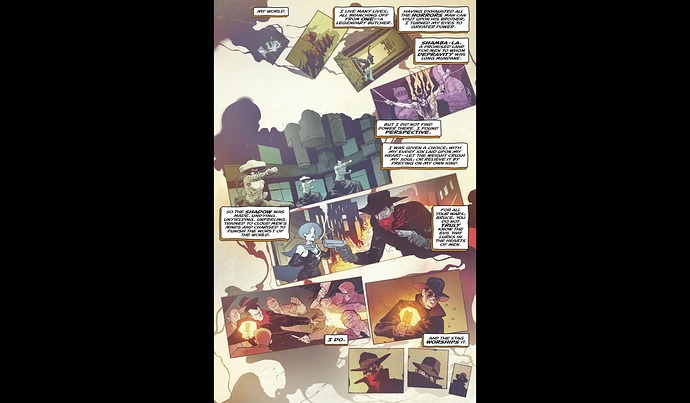 I’m so glad I have the voice from the old radio shows in my head as I read this dialog. It really fits!

This was a fun crossover, I don’t know anything about the Shadow, but it was good to see Bruce interact with Shadow’s world while staying true to his character. The art really works for me too.

Im glad I got to binge this series online. Way outside of either character’s continuity, the writing and the art both find interesting ways to merge these two styles into something new. The Shadow gets to be a mysterious, cursed figure who Batman reveres but doesn’t completely put on a pedestal, and Batman eventually gets a cool mystery to solve. The relationship between them has exciting tension where you’re never quite sure if they’ll end up on the same side.

And I loved the visuals. Clever layouts and really fun, expressive character art. A looser line than I’m used to seeing in Batman comics, and it works.

On that note, I’m kind of done with Scott Snyder stories where Batman discovers there’s some huge, vitally-important backstory that he’s somehow failed to notice for his entire life. Court of Owls and Endgame were good, but I’ve read them already. Seems like he’d be too observant for all of these big reveals to slip past him. Is it just me?

I can kinda see what you mean with Court of Owls, but what thing in Endgame are you talking about?

I was thinking of the Joker’s whole “immortal pale man” thing. Just rang a similar note, for me.

I don’t think that’s quite the same because it was quickly revealed in that same arc to be a con on Joker’s part.

This was a fun read. I do prefer my Shadow as a human agent with his abilities of hypnosis and the clouding of men’s minds vs this seemingly immortal agent.

I liked the connection of Batman’s fate to the Shadow’s and Batman’s ultimate decision once in Shamba-la.