Hello and welcome back to a new edition of the World of Bats: The Batman Book Club! This week we continue our look into the horror side of Gotham and delving into another Scarecrow story, with the story “Cycle of Violence,” from the second volume of Batman: The Dark Knight, written by Gregg Hurwitz and drawn by David Finch! 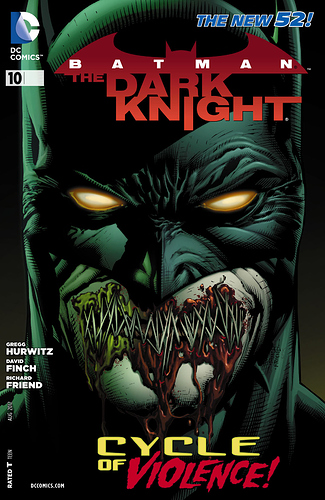 The Scarecrow has returned to Gotham City, but he’s no longer the meek punching bag Batman is used to. The villainous genius has always preyed on the worst fears of his victims, but has refined his legendary fear toxin to even greater effectiveness and deadlier consequences. As the Scarecrow’s origin is unfurled, Batman must find out not only how to conquer this dangerous psychopath, but how to beat his own worst fear.

Let us know what you think of this story below!

I quite liked this one. The parallel the story drew between Scarecrow and Batman was an interesting take and one I had never considered before. It makes perfect sense; both characters use fear as a weapon and both had traumatic childhoods.

Another thing I noticed was that the writer and artist do a really good job of letting the art tell the story. Some of the panels seemed to say a lot without using any words at all.

Yeah, the thing I was struck with and why I chose this was the way they reinterpret Scarecrow’s origin. Having Crane’s obsession with fear coming from his father experimenting on him gives Scarecrow an interesting, tragic edge. It’s one I could see sticking around, because I remember Gotham did something similar.

Thanks for reading and sharing your thoughts!

Ah, this is the silly, shock-value-for-shock-value’s-sake content I want out of my New 52 Batman comics! Maybe I could take Batman’s attempts to connect with a traumatized girl (and his girlfriend and son, for that matter) more seriously if the story didn’t open with the Scarecrow sewing his mouth shut. Then again, maybe not. The whole thing just feels so excessive and unintentionally funny.

I don’t know if it was an editorial mandate to turn the early post-Flashpoint Batman books into horror comics, but if it was, it was a really bad decision. The appeal of horror comics (at least of the classic variety) is that they’re corny and over-the-top in a self-aware way. Sure, Alan Moore’s Swamp Thing run might be the exception, but even it wasn’t always played completely straight. The New 52 Batman comics never seem to be in on the joke, unfortunately.

That said, I did read the #0 issue that fell between issues 12 and 13, and it was significantly better. Maybe I’m just a sucker for variations of the “Bruce meets Joe Chill” story.

I dunno, I think Batman in the end literally sacrificing his own blood to save the city is pretty self-aware.

I know this era isn’t your favorite, but thanks for reading and sharing your thoughts.

I thought that part was a bit much (I’m not sure the science behind it adds up, either, but evaluating the science in comics is a good way to drive yourself crazy and not what I’m here to do). I did like how angry Alfred got after Batman was inevitably fine. That scene probably didn’t hit quite like the author wanted it to because just about everyone knows Batman was going to be fine. It did lead to this exchange, which I found pretty amusing: 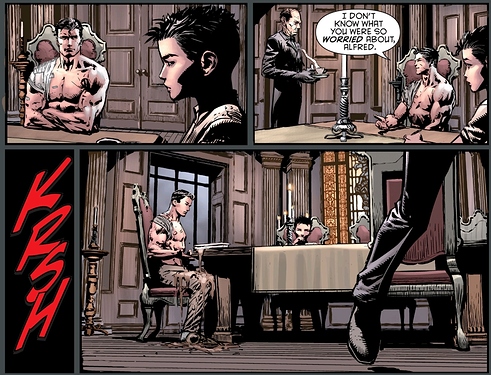 I know this era isn’t your favorite

Yeah, I just don’t care for the “Who can make the goriest Batman comic?” competition that the creative teams seemed to be playing at the time. I still can’t fathom how they ever thought it was a good idea to start the new universe with the Joker getting his face cut off. There’s just too much gratuitous violence and gore in these Batman, 'Tec, and Dark Knight titles, and I’m someone who has a certain affection for gratuitous violence and gore!

I do like Batman Eternal, so at least I have one New 52 series to appreciate.

and I’m someone who has a certain affection for gratuitous violence and gore!

That does kind of surprise me at times, because from what I get of your posts at Office Hours, it seems like you’re all about the stupidly over-the-top gore and violence. Is it something you think shouldn’t be in Batman comics, then?

I don’t think it should be there in some sort of try-hard edgelord sort of way, and that’s how I generally feel about the approach that the creative teams took across the board in 2011.

It’s as if bodily mutilation was to the New 52 what pouches were to the early 90s.