This week, continuing our look at some of the outer-company crossovers within the Batman universe, we’ll be looking at Batman/Teenage Mutant Ninja Turtles, written by James Tynion IV and drawn by Freddie Williams II. 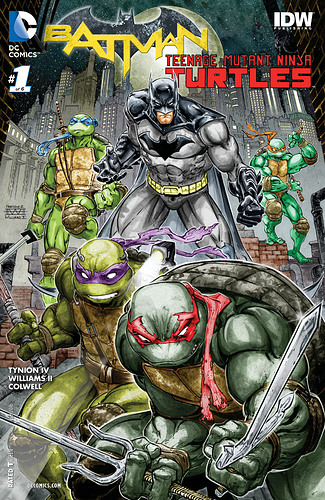 New York City: The Teenage Mutant Ninja Turtles face the battle of a lifetime, fighting not only the fearsome Foot Clan and their leader, the Shredder, but also the alien forces of General Krang … which is exactly Krang’s plan. Now a single dimensional warp can rid him of both of his greatest rivals in one fell swoop!

Gotham City: From the Penguin to Killer Croc to Ra’s al Ghul and beyond, the cowled crime fighter known as Batman has his hands full dealing with an already-overflowing gallery of rogues.

Suddenly, a new enemy emerges in the form of the Shredder and his ninja followers, transported to Gotham and unleashed upon an unsuspecting world. Now they’re on the hunt for the technology that will allow them return home … and conquer Gotham City along the way!

Heroes come in all shapes and sizes, however, and the Caped Crusader won’t be fighting alone. But even with their combined talents, can this all-star team of Batman, Leonardo, Donatello, Michelangelo, Raphael and their teacher, Master Splinter, take down the most vicious villains from multiple dimensions?

If you’re an Ultra subscriber, you can also read the trade for it here: 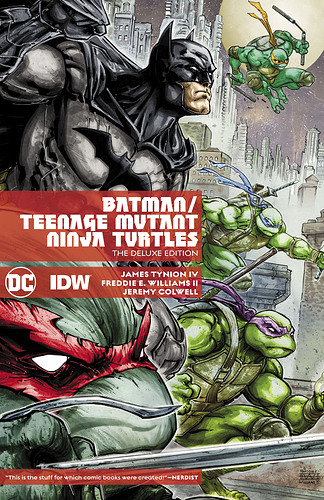 New York City: The Teenage Mutant Ninja Turtles face the battle of a lifetime, fighting not only the fearsome Foot Clan and their leader, the Shredder, but...

Looking forward to talking about this story with you all!

I read this when I first got DCU. Geez! Pre-DCUI!

I remember loving it! TMNT had some funny moments, the action was great, and the nostalgia kicked in almost immediately.

Not to be confused with the animated film of the same name.

Not to be confused with the storyline I constructed with action figures when I was six.

This is a fun story. I feel like they had a clear idea of what they wanted the story to be and they did that. The interactions between Splinter and Batman were probably my favorite parts but I will also shout out the reactions from the turtles when they saw the Batcave.

The series that officially got me to start reading IDW’s Ninja Turtles comic and officially made me a fan of the franchise.

I might have to do that too – I think some of those are still on Comixology Unlimited, and I’ve seen The Last Ronin on sale where I work and it’s enticing me…