[World of Bats] Batman: Shadow of the Bat #1-6 Featuring "The Last Arkham"

Hello Gothamites, and welcome to a new week of the World of Bats, the Batman book club!

This past week marked the start in the current comics of the weekly Detective Comics event “Shadows of the Bat,” which made me think that now’s a good time to look at a classic story that started the book that inspired the name. So this week we’ll be reading the first six issues of Batman: Shadow of the Bat #1-6, written by Alan Grant, with the first five issues drawn by Norm Breyfogle, and the sixth by Dan Jurgens. 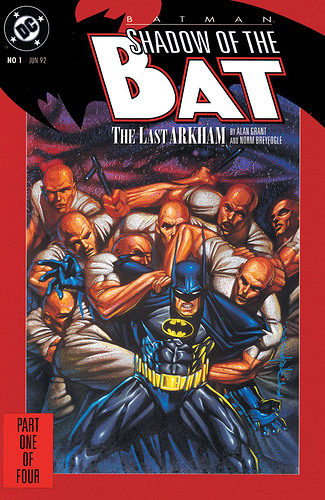 A string of serial killings leave Batman to one suspect – Victor Zsasz. But Zsasz is locked away in Arkham Asylum, newly renovated and security tightened by the crusading young Jeremiah Arkham. To solve this mystery, Batman must enter the asylum as an inmate – but will he leave with his sanity intact?

Also, the shadow of the bat falls over a recovered heroin addict willing to go to any lengths to break his addicted girlfriend’s habit before it kills her and endangers their child, leaving Batman to decide between the law and justice.

Finally, the Ugly American is a brutal chauvinist who thinks everyone who disagrees with his twisted brand of Americanism deserves death. He’s on a rampage in Gotham City, and Batman doesn’t know how to stop him!

Also, don’t forget to check out the Casefile that’s running throughout the month about the Batman issues during last year’s starting event Future State!

Hello Gothamites and welcome to the World of Bats, the Batman Book Club! First off, just want to wish everyone a Happy New Year! Hope 2022 fares better for you all than the future year(s) we’ll be covering in this Casefile! For those who don’t know, Casefiles are month-long entries where we cover larger stories or collections, and for the month of January, we’ll be covering the Batman related titles of last year’s visions of a cruel cyberpunk alternate reality(?) in Future State! Here are the…

Also, Renegade Robins is covering throughout the month of January and February the entire even of Joker: The Last Laugh!

[Gotham Knights 22] The Renegade Robins Club invites you to another big Bat-Event: the Joker epic Last Laugh! (Yes, the Dick Grayson Fan Club covered the six core issues almost two years ago, but we’re doing the whole thing: over 30 issues of madness!) Join us over the next two months as we see what the Clown Prince of Crime is truly capable of once he discovers that he’s dying of a brain tumor! Join the Renegade Robins today! Here is the schedule:

I didn’t know Alan Grant also wrote comic books; I mostly know of him as a paleontologist

Just don’t ask him to babysit.

So I read these issues via a digital trade I got on Comixology a long time ago (back when DCU was curating their comics library and not having as much available as they do now) and the trade includes an interesting introduction from back when they just collected “The Last Arkham” that has some cool behind the scenes details.

A guy came up to me at the San Diego comics convention a few years ago angrily brandishing a copy of BATMAN: SHADOW OF THE BAT #1 in his hand. “You ripped this off from Silence of the Lambs!” he accused.

I’d certainly heard of Silence of the Lambs – the media was full of it around the time this took place. But I pointed out that I’d never read Thomas Harris’ book nor seen Jonathan Demme’s film version. He was surprised. “You haven’t? Why not?” “Well, for the same reason I’ve never seen Straw Dogs, The Texas Chainsaw Massacre or Marathon Man. Basically, I’m too squeamish.”

I’ve written Judge Dredd, brutal lawman of the future, for fifteen years. I’ve written Bamtan, GOtham City’s obsessed vigilante, on a monthly basis for seven years. I’ve written LOBO, DC’s perfecto demento Main Man, for six years. So this guy wasn’te entirely convinced that I couldn’t stand the thought of violence of the sight of blood, and that dead rabbits in the road make me physically ill. “Oh yeah? So if it wasn’t from Silence, where did you get the idea for SHADOW?”

We were in upstate New York on one of our biannual Batman retreats, planning future stories, continuity, annuals and one-shots. Batman maestro Dennis O’Neil, never one to stand on ceremony, began the meeting briskly. “We want to publish another regular Batman comic. Alan–you’ll be the writer. Norm–you’re the artist. Anybody have any good ideas for a title?”

Doub Moench and I did, and so SHADOW OF THE BAT was born. We needed a new angle for the comic–BATMAN monthly ran the regular continuity stories, DETECTIVE COMICS was more “what Batman did on his nights off from the monthly” and LEGENDS OF THE DARK KNIGHT focused on events in our hero’s past. So what would be different about SHADOW? The title provided it: the shadow of the Bat would fall on various heroes or villains, putting someone new under the spotlight in each story arc.

Who’d be first? Natural choice was Batman’s one true nemesis, The Joker. But he had recently starred in the ROBIN miniseries and we didn’t want to overexpose him. The other members of Batman’s rich Rogues Gallery–Penguin, Two-Face, Catwoman, Riddler and so on–somehow didn’t seem individually strong enough to carry off the first four-issue storyline in a new comic. We needed a “new” classic villain–not the easiest of characters to create when you’re up against fifty-five years of continuity.

If memory serves, it was DC President Jenette Kahn, who often sat in on our meetings, who came up with the answer. “Arkham Asylum” would be the villain of the piece, meaning that we could use all the incarcerated villains that we chose, as well as reestablishing a new asylum and curator in the wake of the best-selling Grant Morrison/Dave McKean graphic novel, ARKHAM ASYLUM: A SERIOUS HOUSE ON SERIOUS EARTH.

I started to read up on the Asylum and was amazed to find its first appearance had been in 1980, in BATMAN #326, I could have sworn that I read Arkham stories when I was a kid. I’d have bet good money that I saw Arkham in the 60s TV series. A peculiar thing, the human mind, reaching back to plug gaps in the past with false memories…

Twenty-five winters ago I dated a psychology student at Dundee University, Scotland. Because of her workload and my financial hardship, we spent many unromantic but warm afternoons together in her college library. While she studied, I browsed. I edged past dry textbooks, which I skimmed but never actually read. One slim pamphlet stood out from the rest–Superstition in the Common Pigeon by, if I remember right, the behaviorist B.F. Skinner.

Here’s how it worked: wait till a pigeon is walking past a recognizable landmark, then give it a severe shock. [As a vegetarian I prefer to think the experimenter jumped out and said “Boo!” rather than juiced it with current.] For the next few days the pigeon will be extra wary when passing that landmark, as the memory of that shock lingers. Then, on the third day, when the pigeon is starting to forget its antipathy to the spot, give it a second shock. For the rest of its life, the pigeon will do its best to avoid that landmark–even if it never receives another shock. The experimenters had produced the equivalent of a superstition in a creature not renowed for its glittering mind (though they’re really good at homing).

Skinner’s point was that thought/mind was little more than an irrelevance. He maintained that only an organism’s behavior matters: change the behavior, and the mind will follow.

Though Behaviorism has been largely discredited since then, that thought has always stuck with me. I knew I’d use it in a story one day. “The Last Arkham” is the belated result.

The irate fan was almost mollified. “So what about the villain, Mr. Zsasz? Where did he come from?” Another of the books I read in that college library. The Myth of Mental Illness, by Thomas M Szasz. Note the similarity in name?

That was the clincher. We ended up having coffee and pizza together, talking crazy comics for an hour. I’ve forgotten his name, but if he’s bought this trade paperback edition and is reading this now–Irate Fan, it’s dedicated to you!

I enjoyed reading these. Batman going undercover in Arkham was interesting, although definitely risky for his secret identity. Nice to see Nightwing work with him, even if Dick had that 90s mullet at the time. The 2 standalone stories were good as well. The Black Spiders loss and sacrifice were very sad.

The first appearance of Victor Zsasz is an enjoyable one. I just wish the character had been used more often after Knightfall.

Just finished “The Last Arkham”, I didn’t realize that this was Zsasz’s first appearance. It’s a good read, the stakes felt real and Zsasz felt like a legitimate threat. Something about the writing and the art seemed to strike the right tone

The Black Spider was such a tragic story; I think it was good and the whole thing felt elegiac. The Ugly American had a similar sort of feel. Both stories had their action moments, but I got a kind of melancholic vibe from each one. I also feel like both stories could have been published today and be just as relevant.

I just wish the character had been used more often after Knightfall.

Now that you mention it, I don’t think he’s really had a big story since. I think the only other big story I can remember him really being a big villain in is the issue of Detective where Steph as Robin does a Mike Tyson on him to get out of his grasp, and the Streets of Gotham issues where he was putting kids in pit matches and being sliced and diced by Damian. Outside of that, he’s more an incidental character.

You would think they would have at least thrown him in a Gotham book arc around the time of Birds of Prey’s release for that sweet, sweet market synergy.

I also feel like both stories could have been published today and be just as relevant.

I definitely felt that vibe too – like, Black Spider and his girlfriend’s drug of choice might be updated to something like prescription pain killers and/or fentanyl, but outside of that, they could legit still work today, which is cool in one sense, but mostly kinda sad.

It’s definitely tragic that society is still dealing with the same problems from 30 years ago.

On the other hand, it’s kinda neat to think that people really haven’t changed much since they stepped onto the scene. Romans graffitied