First, I’d like to apologize for being a day late – I’ve been sick with the flu and have been kind of in and out for the past few days.

Anyway, while we finished up our look at Batman comics that are based on games, we’re still in the time of Spooky Season! So let’s look at one starring one of Batman’s most fearsome foes, and is a sequel to a story we covered her a long time ago, “Terror,” written by Doeg Moench and drawn by Paul Gulacy. 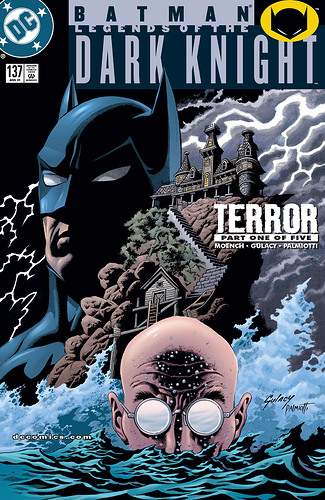 Dr. Hugo Strange is alive, and is working with the Scarecrow! The two genius work together to concoct the ultimate plan to destroy the mind and the body of The Dark Knight!

Looking forward to discussing these books with you all!

I get a touch nostalgic when I see World of Bats covering a Legends of the Dark Knight story, and even more so when it’s a sequel to one of those early stories we read (back when I had enough free time in a week to break down these stories in exhaustive detail).

Thanks for linking to the old thread, was going to and then forgot.

First off, sorry for the late response, last week was one of those weeks.

Secondly, I enjoyed this story. The art was very good and the story created a delightfully creepy vibe. I wasn’t expecting a Catwoman appearance, but it was great. Strange and Scarecrow pair well with each other.

Strange and Scarecrow pair well with each other.

Agreed. (Strange did the fear gas first, by the way!)

@john.21795 No need to apologize – between being sick and work I’ve had one of those weeks too, and it happens.

Glad you liked it! I thought between the villains and the haunted house it made for a good read for around Halloween time. And yeah, the writer of this one, Doug Moench, tends to write in Catwoman in his Batman stories a lot. It’s honestly part of why I’ve liked his Batman stories.

Agreed. (Strange did the fear gas first, by the way!)

And I’m sure Strange is not at all smug and insufferable about it whenever the two meet.