This week, to conclude our look at comics based on Batman video games, we’ll be looking at something…slightly different by looking at the book based on his brief trip in the world of the video game phoenomon known as Fortnite. We’ll be looking at the mini-series Batman/Fortnite: Zero Point, written by Christos Gage and with art by Reilly Brown, as well as the one shot Batman/Fortnite: Foundation, written by Gage, Scott Snyder and Donald Mustard with art by Joshua Hixson. 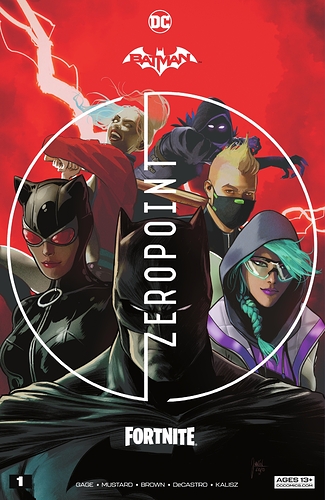 A crack splits the sky above Gotham City…a tear in reality itself. This rift pulls the Dark Knight into a bizarre and unfamiliar world, with no memory of who he is or where he came from…Batman has been drawn into Fortnite! As our hero fights to recall his past and escape an endless loop of chaos and struggle, he’ll come face to face with the likes of Renegade Raider, Fishstick, Bandolier, and more. While the World’s Greatest Detective strives to make sense of this strange new world, he’ll uncover the shocking truth about the Island, what lies beyond the Loop, and how everything is connected to the mysterious Zero Point.

Looking forward to talking about this book with you all!

If you’re reading the tie-in comic for the upcoming Gotham Knights game, Gilded City, you can check out this discussion thread about it!

Friday, October 21st 2022 isn’t just the release date for the anticipated new Batman video game Gotham Knights, but also the release date for a tie-in comic book series that will be available day/date for DCUI members! So this is a discussion thread to share our thoughts on the book as it comes out. Let us know what you think as you read this series! Looking forward to talking about it with you all.

[image] A mysterious virus has infe…

And since this is spooky season, if you want to read some more creepy Batman tales, this club is continuing it’s month long look into the maxiseries Batman: Gotham After Midnight!

This was pretty fun. The authors tied the Fortnite game play loop into a story better than I expected. I liked how all the colors were brighter in Fortnite world it made a great contrast with Gotham.

One thing that disappointed me was that the Foundation story just sort of ended. Does anyone know if they finished it or if they are going to?