This week we’ll be looking at the work of another great comic book creator who’s made his mark on Batman that has sadly recently passed, this time the work of Alan Grant. We’ll be reading Detective Comics #604-609, with art by another Batman legend, Norm Breyfogle. 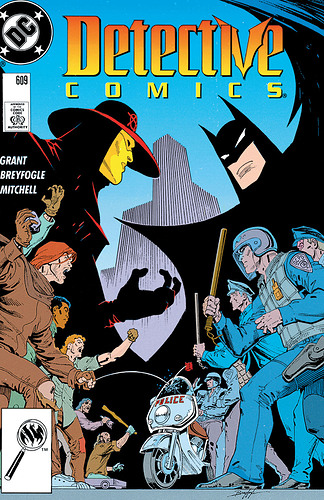 Batman finds himself face-to-face with the dangerous Clayface III…unaware that the Man of Clay is now teamed up with the three other Clayfaces! Also, someone is doing Batman’s job for him. Can the Darknight Detective stop the murderous vigilante Anarky?

Looking forward to talking about these comics with you all!

This is at least the 2nd time we’ve covered something by Grant. The other one I remember can be found here:

Hello Gothamites, and welcome to a new week of the World of Bats, the Batman book club! This past week marked the start in the current comics of the weekly Detective Comics event “Shadows of the Bat,” which made me think that now’s a good time to look at a classic story that started the book that inspired the name. So this week we’ll be reading the first six issues of Batman: Shadow of the Bat #1-6, written by Alan Grant, with the first five issues drawn by Norm Breyfogle, and the sixth by Dan …

I don’t think I knew there was a version of Basil Karlo’s Clayface without powers. All of the theatricality fits the character I know, though.

Grant really nails the tone for Batman across these issues and I found both of these arcs to be page turners, but I probably liked the Anarky story better. It almost seemed like Anarky was being treated as an anti-hero, I definitely didn’t feel he was portrayed as a true villain. There were multiple points where Bruce agreed with him in principle, but not methodology. I didn’t realize until after that this is Anarky’s first appearance.