Howdy y’all and welcome to the third installment of the Batman Book Club. This week we jump into a storyline by Doug Moench with art by Paul Gulacy
In the time immediately following BATMAN: YEAR ONE, Batman confronts Dr. Hugo Strange’s public attacks while Strange heads a task force to stop the Dark Knight. The 5-part “Prey” begins here!

As there are quite a few book clubs going on and I don’t want to make anyone feel rushed so lets give this a 10 day run.
Starting today Aug. 22-31.

As a bonus I would like to throw in the animated feature: Batman Year One. Story by Frank Miller, David Mazzucchelli and Screen play by Tab Murphy. Link below for convenience:

As before, no set of questions just talk about what you liked from the story & Movie or perhaps what you didn’t like. Just share your thoughts and as always happy reading :).

Link for fist issue in run below for convenience: 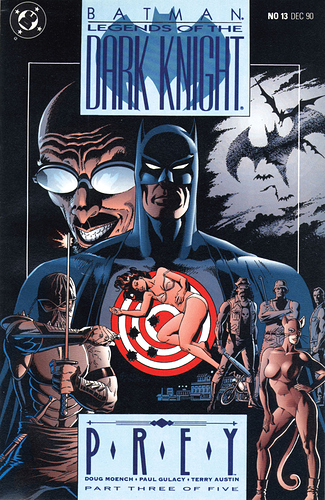 I just saw your post after I posted mine LOL no worries buddy I threw in the year one movie, thought it would be fun to watch before going into this one (or after).

That’s cool, I’m willing to make this one the official thread with the additional movie rec. Been meaning to rewatch Year One anyway.

Fun. Keep up the energy friends, loving all these book clubs!

“Prey” is predominantly inspired by Steve Englehart’s characterization of Hugo Strange from the aforementioned 'Tec #472, where the deranged doctor dons the cape and cowl after capturing Batman and discovering his true identity. Moench had already written a Hugo Strange story in the barely pre-Crisis Batman Annual #10, so it’s unsurprising that his work in this book most closely resembles the Bronze Age version of the character. Very little is taken from his early appearances other than his supposed death (which takes its cue from Strange’s fall-to-possible-death fates from 'Tec #36 & 46). “Terror,” on the other hand, seems to be a conscious effort to update 'Tec #46, where Strange uses a fear gas about 2/3 of a year before the introduction of the Scarecrow.

The relationship between “Prey” and Batman and the Monster Men is a bit, well, strange. Both “Prey” and its sequel were written years before Matt Wagner wrote BATMM (though Wagner made his first contribution to LOTDK, “Faces,” about a year after the last issue of “Prey”). Despite the fifteen-year gap between the publications, Monster Men still does treat “Prey” as semi-canonical. In fact, the last issue of Wagner’s book leads directly into the opening of LOTDK #11. However, Wagner establishes that Batman had just faced off against Hugo Strange, while “Prey” gives no indication that the characters had ever met previously. (To be fair, they never actually say outright that they HAVEN’T met, but the intention is obvious.) Also, Bruce makes a Batmobile near the end of BATMM, and he’s already making a new one in the first issue of “Prey.” Slow it down, Wayne!

I’ll admit that I have mixed feelings about both Moench’s and Wagner’s attempts at a first appearance of post-Crisis Hugo Strange, and I think Moench did much better with his sequel. Granted, the character’s original debut wasn’t the greatest Golden Age story either: his scheme is to create fake fog so that his cronies can rob some banks, and Batman inexplicably already thinks of him as “the most dangerous man in the world” before even facing him. His next two appearances were a vast improvement, and it’s no wonder that these authors took their cues from those stories and from Strange Apparitions when reviving the character.

I just wish that I could honestly say that either of these reboots were more than just decent. “Prey” gets really sidetracked with a vigilante cop subplot and a rather pointless series of Catwoman cameos (which seem to be there simply to serve as a callback to Year One), while Monster Men feels like it owes as much to Mask of the Phantasm as it does the original monster men story from Batman #1.

Haven’t read the story yet, but on the subject of the Year One movie, I’ll just note that I watched it shortly before I read the original story arc. It’s almost a word-for-word, shot-for-shot adaptation, so you can consider yourselves to have read the story now that you’ve seen the movie.

I neglected to talk about the art. Gulacy’s work is generally very good. I like how his Batman mask resembles the 1989 movie mask. I’m not so fond of his rendering of Bruce Wayne’s face, but I can live with it. My biggest gripe is the sheer amount of cheesecake present in this five-parter. I mean, there’s certainly something psychosexual about Hugo Strange’s obsessions in this story, but that doesn’t mean that we have to see every single woman in some form of undress. It feels especially crass with the mayor’s daughter. I’m not at all saying that there’s no place for sexy illustrations of women in a Batman book, but when it’s so constant, it starts to seem a little sleazy.

Finished this up this morning, and I liked it overall. I didn’t think the Night Scourge thing felt too shoe-horned in, because in superhero stories you do need someone to fight and as we can see, Hugo wouldn’t last two seconds in a fight with our Dark Knight. I can see the claims about Catwoman feeling a bit shooed in, though I’m a fan of her, she’s one of my favorite supporting casts of the Batman universe (as my avatar can show), so I can’t really say I didn’t like what little we got.

On the cheesecake element, I didn’t remember seeing anything too egregious for most of the story – of course the Mayor’s daughter is in a state of undress for her kidnapping, but it made sense because Hugo is basically a walking, talking Pick Up Artist book. The only time I remember seeing anything really gratuituous was in a splach page establishing a bar scene where there’s a woman wearing nothing but a leather bikini laying back on the bar table for literally no reason as the Night Scourge comes in – what makes it even better/worse is that she doesn’t even show up on the next page! It’s as if Gulacy was sitting at his table like “this page needs a little extra oomph…I know! Leather bikini lady!”

Also, was anyone else reading Stranges lines in the same voice as the actor of him in Arkham City?

Just got off a long plane ride full of this and some random Detective Comics and Batman issues from around the same time. And I have to say, the stylistic differences between LOTDK and its contemporaries are dramatic; Marv Wolfman’s Batman is well-written (actually a really underrated run, all things considered), but primarily much more typical superhero fare in terms of plot, and Alan Grant’s 'Tec is a cornball, hamfistedly socially relevant refugee from the early Bronze Age.

On the plus side, you’ve got some useful filling-in of the gaps between Batman’s hostile relationship with the GCPD in Year One and his fairly cooperative interactions with them in the “present timeline,” the reintroduction of Englehart’s take on Hugo Strange, and some cool action. And it’s basically Batmobile: Year One, so I’m all for that, too.

I’d say it’s better than Gothic, but not as good as Shaman.

I did think of rating the three, but I figured since the next book will probably be the next arc, Venom, that I’d wait until then.