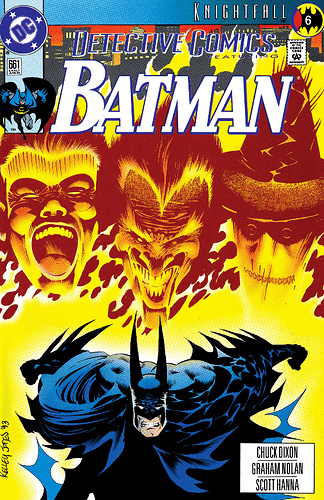 Greetings, Bat-Fans! I’m back with another installment of World of Bats Book Club!

Where last we left off with the Knightfall Saga (waaaay back in Community 1.0, as seen here), Bane had just let everybody out of Arkham like the jerk he is. This time, we’ll have a look at Batman’s struggle to get all these bad guys wrangled again!

(Note: This section of the story is not officially entitled “The Gauntlet.” I just am cutting something longer in half, so I’m giving the first half a title. This will be a regular thing as we continue with these ‘90s crossovers, so I thought I’d establish it.)

Next week: We travel back to the era of disco and excessive sideburns for more Bronze Age Batman!

reaches for a well-worn early 90s trade on the shelf

These issues largely feel like a showcase for Alan Grant’s newly-created rogues:

“Broken Bat” is easily my favorite part of the whole Knightfall-quest-end Saga and my favorite 1990s Batman story. (Too bad the rest kinda sucks.) The best issue of this week’s selections is Batman #493 with Victor Zsasz. How could you not love the Dark Knight in a slasher flick?

Also, I’m kinda shocked that Doug Moench unceremoniously killed off his own creation, Film Freak. You really wouldn’t expect that (and it’s the character’s second appearance!).

I loved the Knightfall saga, it kept me enthralled waiting to see what would happen next

Yeah, one thing that I do like about this part of the story is how it highlights different villains very well and gives them time to shine as they each give Batman one of a thousand cuts he’ll suffer until the end. I think though this is the only time I’ve really seen Amygdala in action and so far I really don’t feel need to see him again – though he does have one of my favorite panels that I’ll highlight soon.

I was also surprised by Film Freak’s death, because I remember him playing a role in Will Phiefer’s Catwoman run, though I suppose that could have just been another guy.

Yes, it was a legacy character in that run.

Because we really needed a second Film Freak.

What’s your opinion of the story so far?

I love Knightfall. Knightquest is meh, but the fall is great.

Which villain’s plot is the most interesting?

Zsasz? Amygdala??
How could anyone not pick Socko!?!?

How are you feeling about Bane so far?

I think what’s missing from a lot of Bane’s later tales (not counting the current run) is how intelligent he is. He’s not a brute force, he plans everything out and then executes.

Haven’t quite finished yet, but I wanted to post some bits from this I’ve liked so far.

One off the things that…I wouldn’t say I discovered so much as I am reminded of its just how much of an artistic powerhouse Norm Breyfogle was. He left this world way too damn soon. 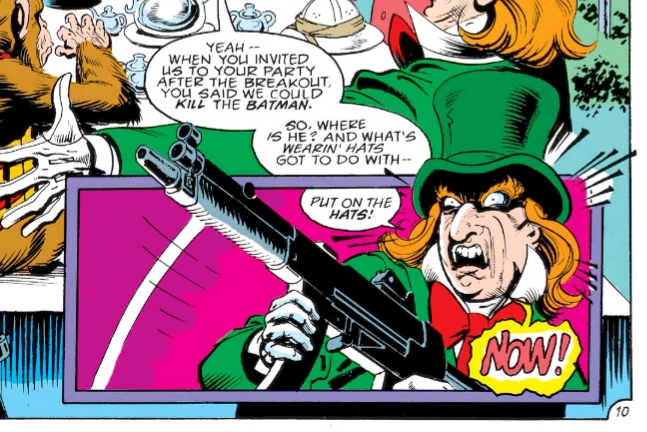 Mad Hatter I think came out very well in this story. I liked how out of all the villains, he’s the one who wants to find out who let them out and doesn’t like being used, because that’s his thing. 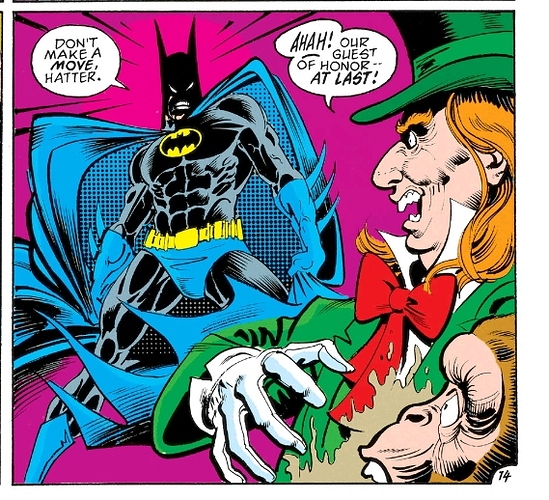 On one hand, Breyfogle really makes Batman look inhuman in panels like this. On the other, I can’t help but feel the blue trunks make him look like a demon who side-gigs as an underwear model. 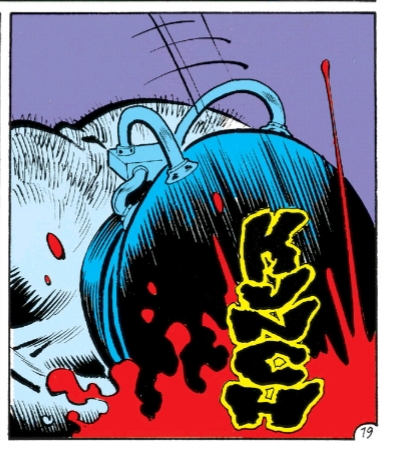 When the cherry pie so good you can’t bother taking off your mask. 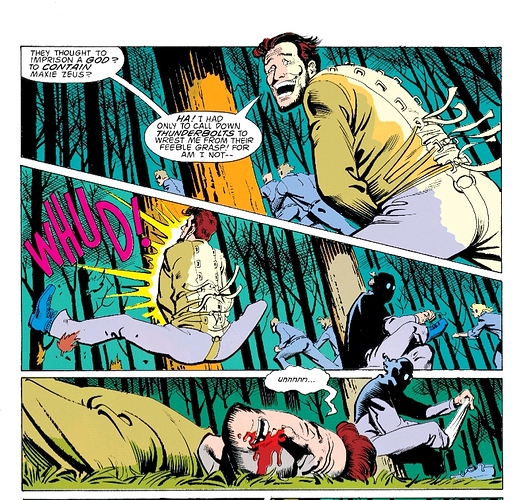 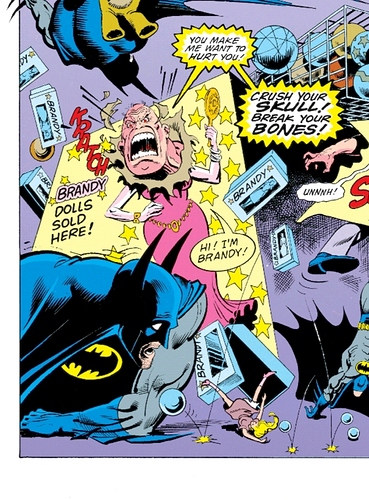 Love how while Breyfogle can make these rogues dangerous and scary, he’s also not afraid to make them funny, when needed. 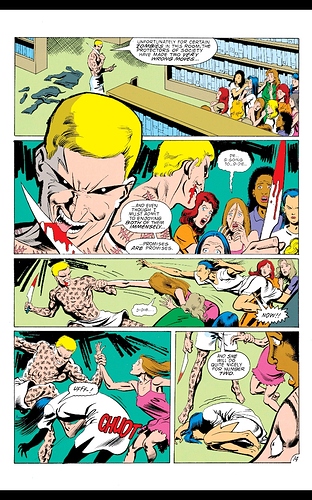 Its funny seeing people complain how the Zsasz in the upcoming Birds of Prey film looks so inaccurate to the comics because he has blonde hair and then see him in this with his original blonde hair (And weird eyes). I wonder, when did Zsasz go bald?

What’s your opinion of the story so far?

It’s okay. Like, the individual plots with the likes of Hatter and such are interesting enough, but the main plot feels like a snail’s pace. Like, how many conversations do we get of Alfred or Tim or anyone telling Batman to take a breather? And seeing him not do so every time just makes it more aggravating.

Also, I don’t remember what the deal is with this shrink guy, but it feels like the most egregious and brain dead “see, I read Dark Knight Returns too” I’ve ever seen.

Which villain’s plot is the most interesting?

Like I mentioned earlier, Mad Hatter had some good moments, but from what I remember, the stuff with Scarecrow and Joker are far more interesting.

How are you feeling about Bane so far?

Underwhelmed, honestly. Like, I get what they’re doing with him, but him just sitting around and watching the news just doesn’t really drive home the “master strategist” angle. I feel like later writers will do much better with this character later – Tom King’s lead up to City of Bane to me is basically Knightfall done better.

I’m late for this club, but the part I feel worst about…

How could anyone not pick Socko!?!?

… Is not being able to talk about Socko!

Tom King’s lead up to City of Bane to me is basically Knightfall done better.

Hang on, have to go raid biff_pow’s reaction images topic for an appropriate response… 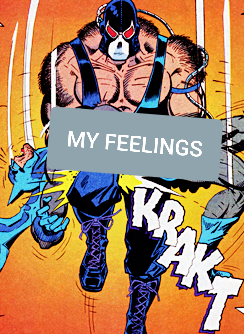 Like a lot of the folks on here, I’ve read this one before courtesy of my local comic shop’s dollar bin, but going back into it after so many years (and now with so many more stories under my belt), I really got to appreciate it at a whole other level. For instance, there’s the occasional page devoted to the late night talk show host and his therapist friend. It’s been a pretty constant trope in Batman comics since TDKR, but instead of taking it seriously, the writers make a parody of it, with the therapist spouting off such ridiculous nonsense that it acts like a fun little break from the constant theme of the whole Knightfall arc, that Bats simply can’t catch a break.

Of all the villains, I think I liked Zsasz’s story the most. Something about the whole “hunter/hunted” theme felt very intriguing to me. Sure, Joker and Scarecrow will have one of the longer plots as they work together, but within this first third of Knightfall, it’s been pretty slow.

Bane is just the way I remembered him being when I first picked up the issues: methodical, unstoppable, etc. Even without the Venom, he gave Croc yet another good beatdown, and the fact that he is so present throughout the issues helps build the suspense towards his ultimate encounter with the Dark Knight.

It’s been a pretty constant trope in Batman comics since TDKR, but instead of taking it seriously, the writers make a parody of it, with the therapist spouting off such ridiculous nonsense that it acts like a fun little break from the constant theme of the whole Knightfall arc, that Bats simply can’t catch a break.

Well, it was completely satirical in Dark Knight Returns, that story is actually filled with a lot of satire. That’s part of why I found those pages so pointless, since they felt like a hollow, half-assed retread of what Miller did before.

I guess you’re right that it was satirical to begin with, but idk, I feel like what they’re doing here isn’t so much a hollow retread as it is just kicking it up a notch. They’re over-emphasizing the ridiculousness of the “talking heads” in order to put a quick joke in a standard, monthly issue. If we were reading Batman: The Cult; now that is a blatant copy of Miller’s work.

Right on time as usual

Oh I agree with y’all on those panels they felt unnecessary and I kinda feel like it cheapened the story a little with making come off as TDKR rip off just a tad.