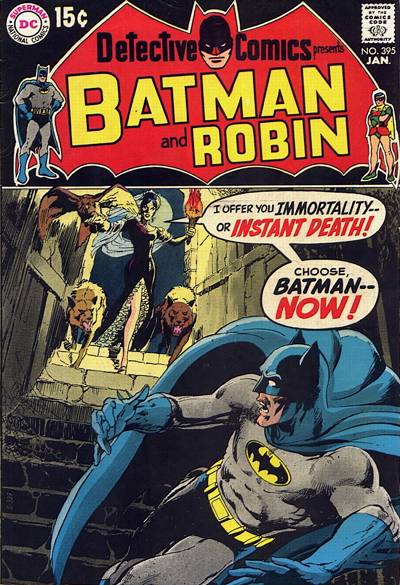 Greetings, Bat-Fans! I’m back in the saddle again for the World of Bats Book Club, and I’ll be starting a new ongoing project that I’ll be alternating with our look at Knightfall (and eventually some of the other ‘90s Bat-Crossovers).

My original plan was to focus on Dennis O’Neil’s classic ‘70s run on the Bat-Books (which remains, in the estimation of many, the definitive take on the Dark Knight), and I’m still sort of doing that, but there were a few issues. First, he didn’t have a straight “run” on either Detective Comics or Batman for any extended period of time. At his heaviest involvement he would usually trade off with other writers like Frank Robbins and Mike Friedrich, sometimes flipping between main stories and the Robin or Batgirl backup stories.

So, I decided: why not just take an extended trip through Batman’s whole Bronze Age run? Well, for one thing, we’re missing a ton of it (mostly Batman; Detective Comics is pretty complete starting a couple months into 1970, but I think we’re missing more Batman than not from the decade). So, I’m going to have to limit this to what portions we do have (note that for this entire club, we only have one Batman issue to seven 'Tec). And we’ll still certainly be seeing a lot of O’Neil, so this is about the best we can do.

Preamble aside, let’s get going!

Because this is a sort of eclectic collection of oneshot stories, I can’t provide much in the way of coherent discussion questions, so whatever thoughts you’ve got, go nuts.

Next week: The Gauntlet begins!

Nice! I have read a couple of these before, but looking forward to going through these again and try the others for the first time.

Oh, and @AquamonC137, sorry I didn’t participate last week. I meant to, but it’s Finals season for me, so I don’t know that I’ll even be able to read this stuff.

Real life takes precedence, I think everyone understands that.

Oh no worries man, I am in the same boat this week. Best of luck on your finals!

The best of these stories is, of course, “Challenge of the Man-Bat” from 'Tec 400. I like how Robbins sets him up as a potential friend or foe. A number of Man-Bat’s 1970s appearances continue to play with that idea before the writers just gave up and made him a baddie all the time. The murder mystery with the novelist was pretty fun too, largely because it’s amusing to see Gotham’s #1 playboy acting all high and mighty about a trashy novel.

O’Neil’s earliest Batman stories are pretty underwhelming, but he does write a solid Batgirl/Robin story as a backup. (Robbins still tops him with his own Batgirl story.) The most notable thing from Denny is the introduction of the ever-irritating Arthur Reeves, who will eventually become a major problem for Bats and Gordon (in the capable hands of Gerry Conway).

I did find it interesting back when I read it that Man-Bat was more of a possible anti-hero. Makes it even cooler to see him over on Justice League Dark playing a more heroic role. 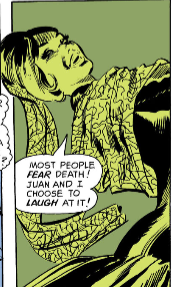 I should hope so. Your name is literally “Muerto.” 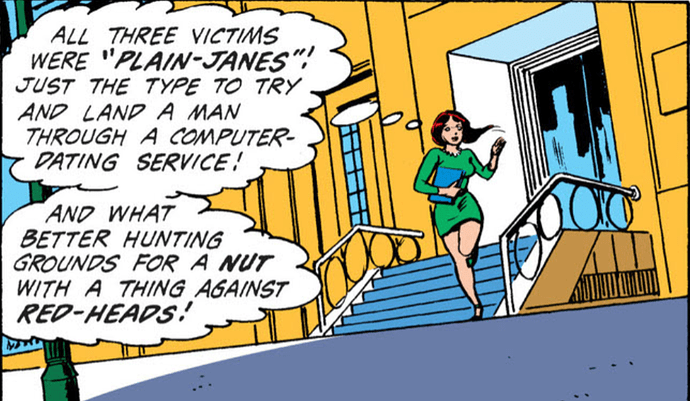 In all seriousness, how would that even work before most people had personal devices? 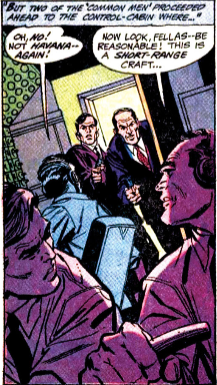 I love how they seem more exasperated than intimidated. “Aw man, why don’t the hijackers ever take us anywhere cool?”

The Mike Friedrich backup story in Batman #219 was excellent, by the way.

I guess there was video dating and that kind of thing back in the day. I THINK I remember reading where this story goes after and it looked like video dating.

Detective Comics #395 was a really good story. The Muertos were good, creepy antagonists, and the whole story had a great Twilight Zone vibe to it. From the looks of it, this story is one of the first that really delves back to the dark, creature of the night vibe that Batman had back in his origins, and I think is important for that reason.

The Robin story…I don’t know if I can really judge it because it feels like the last part and it doesn’t really explain what’s going on. I guess these hippies were faking police brutality cases to close down the school, for…reasons? I dunno, plot made no sense, the action was pretty well drawn, though! 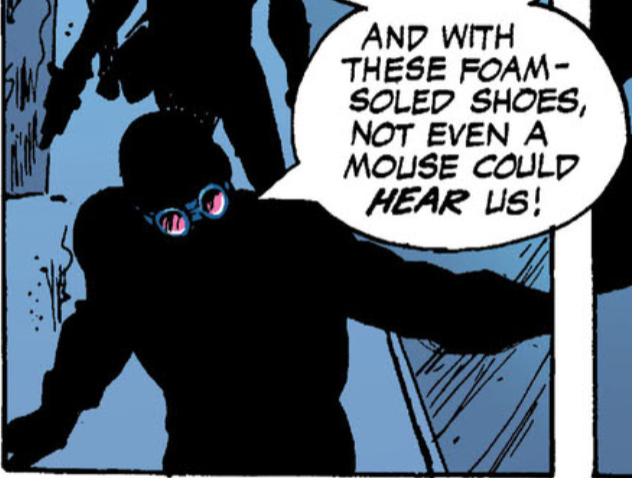 “Gosh, we’re so quiet! Isn’t it great how quiet we are, guys?! No one will hear us coming like this!”

“Brad, who are you talking to?”

Detective Comics #396, while definitely not in the same quality as the O’Neil/Adams book previous, is still pretty fun. It’s a goofy premise – a whiz kid stock broker who does his thing on a motorcycle gets kidnapped by two-time loser goons – it works out pretty well as a unique mystery that only Batman can solve.

The Batgirl story was also pretty good – as odd as it is that computer dating is so advanced in the 60s, it’s actually pretty interesting and, sadly, almost timelier now with it’s villain apparently being a crazed pick up artist.

(I did find it odd that the story used a clue of Barbara finding “The Femme Mystique” with a computer dating card and the book being a book about the weakness of women, yet the book seems to be invoking the book “The Feminine Mystique,” which is about women wanting more to their lives that just the 50s idea of housewives.) 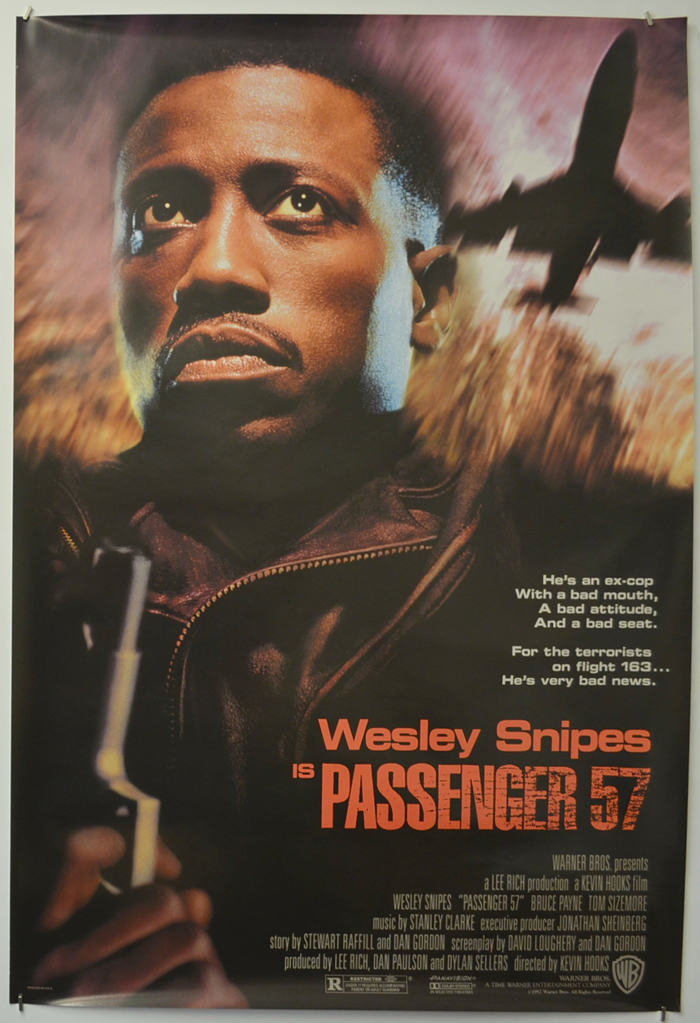 Seriously though, I liked it. It was a short but sweet one-shot showing Bruce’s inventiveness and guile to be able to pull of being Bruce and Batman on the same flight. Oddly enough, I figured it was going to have some sort of twist with who the villain was when he had that full-faced mask.

The back-up was also good, and really timely, considering the holiday season (I’m gonna assume you meant that on purpose, @BatJamags

). It really highlights Neal Adams as a storyteller and just his amazing artwork in general. Plus it’s nice to see Batman have a nice night for once – even if it makes zero sense that it could actually happen but hey, it’s a Christmas story, you kinda have to throw logic out the window a bit.

Detective #397 was pretty good too, similar to #395 in that it was basically Batman solving a weird Twilight Zone style mystery. I did find it kind of funny that Batman basically screws up on his intimidation game by trying to dodge some kind of harpoon and having it still clip him enough for the crooks to get away. I don’t think Batman nowadays would do something that dumb.

The conclusion to Batgirl’s Orchid Killer story was also pretty good. The actual killer and how they’re revealed was clever enough. I do kind of want to be a fly on the wall on when Jason Bard asks Barbara just why the hell she was using that computer dating site when they’re going steady.

Detective #398 was also good, similar to Batman #219 and Detective #396 in that they’re less supernatural and more human, strange crime stories. Going through these, I feel like we don’t get these a lot in modern Batman comics, one-shots with a strange mystery that only Batman can solve. Last time I can remember a lot of these were in Paul Dini’s Detective Comics run.

Ok done with finals. will try to get this done by deadline. @BatJamags hope your finals went well man.