This week we’ll be finishing up our deep dive in the world of Neo-Gotham by looking at the most recent series that’s currently on DCUI from the Rebirth relaunch! So we’re going to be reading the first six issues, Batman Beyond: Rebirth and #1-5, written by Dan Jurgens and drawn by Ryan Sook, Adrian Syaf, and Bernard Chang! 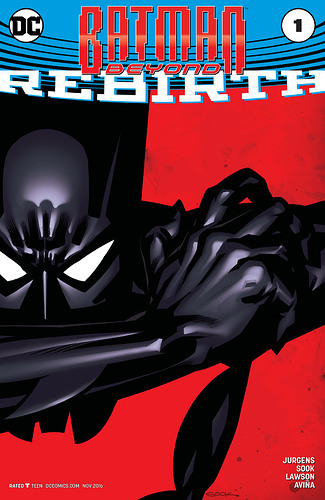 As the future Gotham City recovers from global catastrophe, a familiar face is ready to wear the cowl of the Batman once again. Terry McGinnis has returned to defend his city as Batman, and his family and friends couldn’t be happier.

But another resurrection threatens to destroy all Terry holds dear. Rumors are spreading like wildfire that the original Joker lives—and the brutal crime lord called Terminal and his sadistic gang of Jokerz are waging war in the streets to prepare for the Clown Prince’s second coming.

Just days after becoming Batman again, Terry must take up the fight against the greatest foe he’s ever faced. When the dust clears, will the joke be on him?

Apologies for the late reply.

This was a fun arc. I enjoyed seeing Terry back and him going under cover as Matches Malone’s son was a brilliant callback by the writers (even though it didn’t work out for Terry). I’m glad Bruce is alive; the dynamic between him and Terry is really the heart and soul of Batman Beyond.

Terminal makes a good nemesis for Batman and while Joker is a great villain I’m a little disappointed that they brought him back into Batman Beyond. Terry has his own rogues and sometimes I feel Joker can be a bit of a crutch for Batman writers.

Pssh, as someone who just bumped up threads from six months ago to share thoughts on another groups’ posts, I’m the last person to say anything about being late.

while Joker is a great villain I’m a little disappointed that they brought him back into Batman Beyond. Terry has his own rogues and sometimes I feel Joker can be a bit of a crutch for Batman writers.

I think there’s definitely a lot of that, especially once they started to try to meld both the DCAU and regular DCU together in the Beyond verse. Like, I can understand why doing versions of Hush or Damian might be cool, it kind of lessens the impact of Terry’s character and reign in Gotham. I think what is making Neo Year work right now is that it’s at least trying to further expand Terry’s rogues.

Thanks for sharing your thoughts!