We’re continuing our look at Batman Beyond and looking at the 2015 series issues #1-6, written by Dan Jurgens with art by Bernard Chaing. 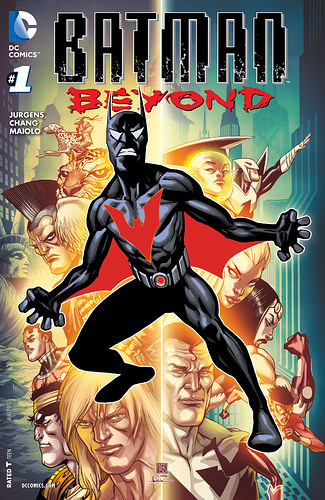 At last, Batman Beyond gets his own ongoing series in THE definitive future of the DCU! But this isn’t the Beyond you think you know! With the Justice League missing and without Bruce to guide him, this new Batman will need to explore this bizarre world on his own, while fighting to raise humanity from an opponent that’s already won. The heroes Batman knew have failed, the world he knew has been turned on its head, and every step he takes will lead him either toward finding home—or further down the road of disaster!

Looking forward to hearing from you all!

And if you are looking for more Batman related stuff to do, check out these other events in the DCUI community:

First off, on Wednesday, April 20th, there will be a Watch-Along for The Batman!

[image] @JusticeLeagueBookClub and all other Batfans rejoice, for The Batman’s April 18th HBO Max debut is nearly here!

However…you can watch and comment on it right here with your DCUI pals two days later on April 20th. Sounds like some riddle-solving, kitty cat-adoring, skull-cracking fun as only The Batman can provide, right? RIGHT!

The newly minted Wonder Woman focused club “The Wonder Squad” are starting with the start of Phil Jimenez’s run on the Wonder Woman title, “Gods & Gotham”!

We have a few other activities afoot this month, focusing on the Amazons in Themyscira, so we’d like to invite you to join a few of them for a quick trip to Gotham! …perfect vacation spot, right? Wrong!

We’re on a mission! [image] Wonder Woman 164–167 After Penelope, oracle of the Gods, has a vision that forces of panic and discord are rising in Gotham City, Diana and Artemis arrive just in time to discover 3…

And a joint effort between the World of Bats, Harley’s Crew, House of Horror and Obscurity of DC Club are following the most recent Batman event as it drops on DCUI, Fear State!

House of Horror is also covering the short-lived series Gotham By Midnight.

If I missed anything, please let me know.

Eye am not entirely sure what to think about this one. It’s definitely got some good action and it’s pretty cool to see an older Barbara. Inque is a cool character too. Micron felt pretty flat as a character, but it was funny to see him do the thing people said Antman should do to Thanos.

Eye guess that Batman Beyond doesn’t feel quite right without Terry. That’s no knock against Tim, he’s ok as Batman.

Good pick, it’s probably something Eye wouldn’t have read otherwise, but it was definitely enjoyable. It makes me want to read Future’s End.

Eye see what you did there.

It’s been a while since I read any of Future’s End, but I remember it being okay to decent. In terms of other weekly series, it’s not as good as 52, but it’s not as bad as Countdown.

Thanks for sharing your thoughts!

If I recall correctly, the Booster Gold series has a Future’s End tie in. I thought about reading the event then after Booster’s series.

52 is quite good, if anyone here hasn’t taken the time to read it it is worth your time

52 is quite good, if anyone here hasn’t taken the time to read it it is worth your time

Yes, and if you want to talk about it, you should check out the hashtag #52-book-club for…reasons…