This week, in keeping with our spotlight on the Terry McGuinness Batman, we’ll be looking at the 2010 mini-series Batman Beyond, which sought to combine the animated continuity with the traditional universe of DC Comics. Will it work? Let’s find out! This mini-series is written by Adam Beechen with art by Ryan Benjamin. 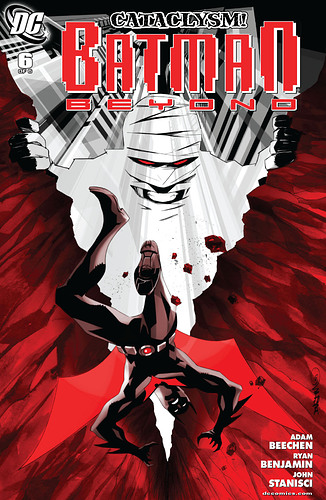 Terry McGinnis–the Batman of the future–and an elderly Bruce Wayne–the original Batman–are the sworn protectors of Neo-Gotham. But when someone targets The Dark Knight’s old foes, the new Batman must begin a case that reaches back into Bruce Wayne’'s past and puts Terry’s future directly in danger.

Looking forward to discussing this story with you all!

This was an interesting story. Amanda Waller is still scheming all these years later. I guess Bruce and Dick’s relationship explains why he turned to Terry, but I have to say I don’t like it. At least he is thawing out with Terry. The new Catwoman is pretty cool.

I guess Bruce and Dick’s relationship explains why he turned to Terry, but I have to say I don’t like it.

Yeah, stuff like that is part of why I’m a little against making Batman Beyond part of regular continuity, because it implies that Bruce just straight up alienates every single member of his family and that’s just a little too grim, even for me.

I enjoyed this story and I like Terry as Batman. The neo-Catwoman is an interesting take and I really like the aesthetic of Neo-Gotham.

Like some others, I didn’t especially enjoy the Dick Grayson twist. Honestly, I didn’t quite get why clone Grayson was using the Hush persona. I also kind of thought they were setting up new Hush to be Jason; I find it a little odd that Jason and Damien weren’t even mentioned even though Tim and Dick both played roles.

Almost forgot to mention that I really liked the moment between Bruce and Terry towards the end. The moment where Bruce reached out to Dick at the end was (almost) nice, too