Hello Gothamites to another installment of the World of Bats, the Batman Book Club!

This past week was actually the 56th anniversary of the first airing of the famous Batman TV series starring Adam West and Burt Ward. So, to celebrate, I think now is a good time to look at the recent comic book continuation of the series called Batman '66! We’ll be looking at the first twelve issues, written by Jeff Parker, with art by Johnathan Case, Ty Templeton, and Joe Quinones! 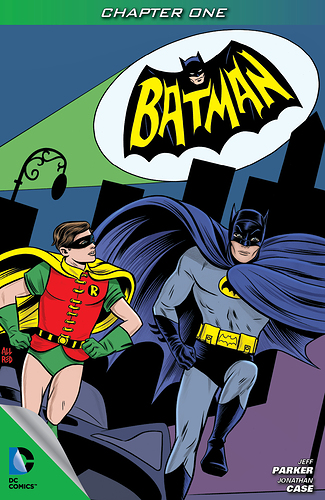 CAN the Caped Crusader unravel the Riddler’s latest ruse?

WILL Catwoman, that feline queen of crime, sink her claws into our heroes?

HAVE the Dynamic Duo met their match in the Antarctic Alliance of the Penguin and Mr. Freeze?

WHO will get the last laugh when Batman and Robin are forced to team up with the Clown Prince of Crime himself—the Joker?

The answers await you on each pulse-pounding page of BATMAN '66 VOL. 1, an all-new collection of spine-tingling, swashbuckling stories in the style of the classic Batman TV series!

Here are the issues:

I enjoyed watching the reruns of the show on TV Land (I think that was the channel) as a kid. It was quite possibly my introduction to the character. I’m curious what I’ll think about the comic book continuation. I’ll post my thoughts in the same Bat thread at a later Bat time

Love the team up story of The Penguin with Mister Freeze, that’s got to be my favorite story of the series.

This was a heap of corny fun and I thought it was great. The art style is perfect and the writing strikes the right tone. My favorite part is probably the trip to England, it was just so much wacky fun.

I was a bit disappointed that we didn’t get the “atomic batteries to power, turbines to speed”

One thing that stands out about the issues - I assume it is true of whichever electronic version you read them in - is that they were part DC’s experiment with pseudo animated panels. If you read 'em in an electronic format, one panel might have two or three changes to it. This extra bonus had gone by the wayside after a year or so,but was evident in all the early issues.