This week we’ll be looking at the further adventures of Cassandra Cain during her first ongoing series as Batgirl, reading issues #9-11 and 13-16, written by Kelley Puckett and drawn by Damion Scott. 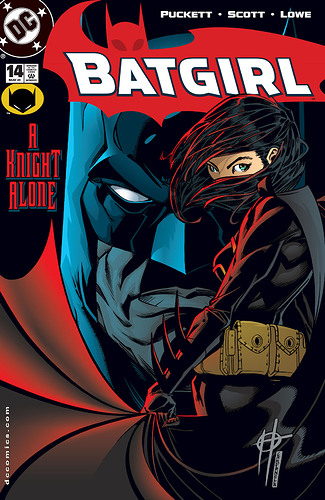 After losing her ability to read people and a traumatic showdown against Lady Shiva, Cassandra Cain makes a decision that will shape the rest of her life. As Batgirl she faces off against enemies physical and mental.

Note: The reason we’re not covering issue #12 is because it’s in the middle of a crossover event “Officer Down” which the club will cover in full at a later date.

If you’d like a catch up on Cass’ story up to this point, you can see where the WOB has covered her in the past here:

Hello and welcome to the World of Bats, the Batman Book Club! So for the month of May, aka Asian Heritage Month, this book club will not only showcase some of the amazing Asian/Pacific Islander creators who have put their touches on the Dark Knight, but some of the characters that are part of the Batman universe, and what better character to focus is Cassandra Cain, aka Batgirl/Orphan? [image] So this week, we’re going to start with her origins, during the epic event No Man’s Land. For thos…

Hello and welcome to the World of Bats, the Batman Book Club! This week we’re continuing our look at Cassandra Cain, the second Batgirl, by looking at the first eight issues of Batgirl, the first on-going book the name has ever had, written by Kelley Puckett and drawn Daimon Scott. [image] You can read these issues by clicking here: DC UNIVERSE INFINITE Reading for this entry will last from 2021-05-08T05:00:00Z (UTC) → 2021-05-14T05:00:00Z (UTC), but of course, if you’ve just recently lear…

And if you’re looking for more Batman related books to read and talk about:

WOB, Harley’s Crew, House of Horror and Obscurity of DC Club have all collaborated on a post detailing the most recent Batman event Fear State as it drops on DCUI:

Over at Renegade Robins, you can check out Cass’ bestie, Stephanie Brown’s history as Spoiler and more:

Over at the Birds of Prey Club, for AAPI Month they’re focusing on a character introduced in Batman & The Outsiders, Katana!

We’re back this month with another cool spotlight feature! We have done our core ladies and we thought, hey, what are some of the other BOP members we might want to highlight?

And given that May is AAPI Month celebrating Asian American and Pacific Islander Heritage, we present to you none other than Katana!

[The_Other_History_of_the_DC_Universe_Vol_1_3_Textless] We will be delving into these varied and excit…

If there’s anything else I’m missing, please let me know.

These issues weren’t bad, but I don’t really connect with Cass. It doesn’t help that a plot point in these issues is that she sees no value in being a normal, relatable person.

The writer also seems to take personal glee in killing off as many innocent people as possible. After a while, it starts to feel a tad nihilistic.

Interesting - I have a similar reaction, while still respecting the craft that Puckett puts into the series, it makes me too cold for Cass to fail so often. I get the point he’s trying to make, but it makes Batgirl feel useless.

I’m pretty much in agreement with what @AlexanderKnox and @millernumber1 have said already. These issues are enjoyable enough but I just don’t connect with Cass and it’s frustrating to see her not get a win (even when we thought she had saved that guy he ended up dead anyway). The issue with the bank robbery has a twist that I didn’t see coming, but that’s probably the only thing that really stands out to me. I don’t know if it’s because she just doesn’t say much or what

I really do want to like Cass (and I do feel sorry for her), but she has all of the unrelatable backstory of Damian Wayne but without the Grant Morrison touch to make me have a soft spot the little brat anyway. (She’s still better than Jean-Paul Valley, though.)

Maybe she needs far more Stephanie Brown in her life to act as her Jon Kent. Or maybe she needs to be part of a Bat-Family team alongside other sidekicks whom I enjoy far more in a group than I do on their own. (If only such a story arc existed . . . perhaps in the pages of Detective Comics?)

Oh, man, there’s so much interesting disagreement I have here!

I do think that Cass and Damian have VERY similar backstories, but I find Cass’s MUCH more sympathetically handled than Damian’s. I loathed Damian for two years because Morrison wrote him as such a jerk.

And also, Jean-Paul Valley is great!

Cass does need more connections, I think, to bring her life in a more positive direction. But sadly, she rarely got to keep the ones she formed.

And we do agree that Cass in Detective Comics was part of a great team!

It doesn’t help that a plot point in these issues is that she sees no value in being a normal, relatable person.

I mean…is being a normal person really that great? But don’t mind me, I’m a bit of a misanthrope, don’t mind me.

Seriously, while she may not have a normal life, what I did find at least compelling was her struggle with not having her abilities thanks to her being able to speak. The way she handled by turning to Shiva was interesting – not just because of who Shiva turns out to be to Cass, but what she is willing to do for something that gave her such pain and anguish.

A line from that has been sticking to me was when she was thinking about whether to accept Shiva’s answer, something along the lines of “Can I be mediocre for the rest of my life…or perfect for a year?”

The writer also seems to take personal glee in killing off as many innocent people as possible. After a while, it starts to feel a tad nihilistic.

That’s an interesting point. I can’t recall anything particularly cruel other than killing off the guy that Cass saved later. I guess you could chalk it up as the sign of the times. This was the early 00s, after all, with some peak Bat-Dick abound, and I’m not talking about Richard. I thought Bruce in these issues was handled well enough, at least.

Maybe she needs far more Stephanie Brown in her life to act as her Jon Kent.

There’s definitely something to that – I think Cass and Steph are a great duo and I’m really enjoying their co-starring roles in Batgirls right now. Cass is a little more verbose, but still a girl of few words, but Steph helps balance it out.

(If only such a story arc existed . . . perhaps in the pages of Detective Comics ?)

Funny you should say that, I was planning on doing the next round of that run pretty soon, but this comment moved it up a bit.

Thank you all for sharing your thoughts!